News by Subject » Astrophysics » A Bridge of Dark Matter Detected

Direct measurement of a dark-matter ‘filament’ confirms its existence in a galaxy supercluster.

A ‘finger’ of the Universe’s dark-matter skeleton, which ultimately dictates where galaxies form, has been observed for the first time. Researchers have directly detected a slim bridge of dark matter joining two clusters of galaxies, using a technique that could eventually help astrophysicists to understand the structure of the Universe and identify what makes up the mysterious invisible substance known as dark matter. 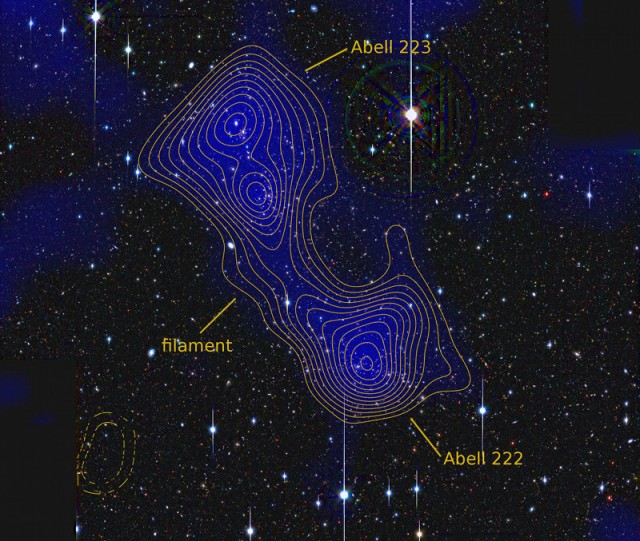 Dark-matter filaments, such as the one bridging the galaxy clusters Abell 222 and Abell 223, are predicted to contain more than half of all matter in the Universe. Image credit: Jörg Dietrich, University of Michigan/University Observatory Munich

According to the standard model of cosmology, visible stars and galaxies trace a pattern across the sky known as the cosmic web, which was originally etched out by dark matter — the substance thought to account for almost 80% of the Universe’s matter. Soon after the Big Bang, regions that were slightly denser than others pulled in dark matter, which clumped together and eventually collapsed into flat ‘pancakes’. “Where these pancakes intersect, you get long strands of dark matter, or filaments,” explains Jörg Dietrich, a cosmologist at the University Observatory Munich in Germany. Clusters of galaxies then formed at the nodes of the cosmic web, where these filaments crossed.

The presence of dark matter is usually inferred by the way its strong gravity bends light travelling from distant galaxies that lie behind it — distorting their apparent shapes as seen by telescopes on Earth. But it is difficult to observe this ‘gravitational lensing’ by dark matter in filaments because they contain relatively little mass.

Dietrich and his colleagues got around this problem by studying a particularly massive filament, 18 megaparsecs long, that bridges the galaxy clusters Abell 222 and Abell 223. Luckily, this dark bridge is oriented so that most of its mass lies along the line of sight to Earth, enhancing the lensing effect, explains Dietrich. The team examined the distortion of more than 40,000 background galaxies, and calculated that the mass in the filament is between 6.5 × 1013 and 9.8 × 1013 times the mass of the Sun. Their results are reported in Nature (DOI: 10.1038/nature11224).

By examining X-rays from plasma in the filament, observed by the XMM-Newton spacecraft, the team calculated that no more than 9% of the filament’s mass could be made up of hot gas. The team’s computer simulations suggest that roughly another 10% of the mass could be due to visible stars and galaxies. The bulk, therefore, must be dark matter, says Dietrich.

Mark Bautz, an astrophysicist at the Massachusetts Institute of Technology in Cambridge, notes that astrophysicists do not know precisely how visible matter follows the paths laid out by dark matter. “What’s exciting is that in this unusual system we can map both dark matter and visible matter together and try to figure out how they connect and evolve along the filament,” he says. Japan’s Astro-H X-ray space telescope, due to launch in 2014, will be able to characterize the ionization state and temperature of the plasma in the filament, which will help to discriminate between different models of how the structure formed.

Refining the technique could also help to pin down the identity of dark matter — whether it is a cold (slow-moving) particle or a warm (fast-moving) one, like a neutrino — because different particles will clump differently along the filament. The Euclid space mission, due to launch in 2019, will provide more lensing data. “This will complement direct dark-matter searches, for example at the Large Hadron Collider,” says Alexandre Refregier, a cosmologist at ETH Zurich, the Swiss Federal Institute of Technology in Zurich.