News by Subject » Astrophysics » A Close Look at Drama of Starbirth

Astronomers using the Atacama Large Millimeter/submillimeter Array (ALMA) have obtained a vivid close-up view of material streaming away from a new-born star. By looking at the glow coming from carbon monoxide molecules in an object called Herbig-Haro 46-47 they have discovered that its jets are even more energetic than previously thought. The very detailed new images have also revealed a previously unknown jet pointing in a totally different direction.

This unprecedented image of Herbig-Haro object HH 46-47 combines radio observations acquired with the Atacama Large Millimeter/submillimeter Array (ALMA) with much shorter wavelength visible light observations from ESO’s New Technology Telescope (NTT). The ALMA observations (orange and green, lower right) of the newborn star reveal a large energetic jet moving away from us, which in the visible is hidden by dust and gas. To the left (in pink and purple) the visible part of the jet is seen, streaming partly towards us. Image Credit: ESO/ALMA (ESO/NAOJ/NRAO)/H. Arce. Acknowledgements: Bo Reipurth

Young stars are violent objects that eject material at speeds of as high as one million kilometers per hour. When this material crashes into the surrounding gas it glows, creating a Herbig-Haro object [1]. A spectacular example is named Herbig Haro 46-47 and is situated about 1,400 light-years from Earth in the southern constellation of Vela (The Sails). This object was the target of a study using ALMA during the Early Science phase, whilst the telescope was still under construction and well before the array was completed.

The new images reveal fine detail in two jets, one coming towards Earth and one moving away. The receding jet was almost invisible in earlier pictures made in visible or infrared light, due to obscuration by dust clouds. ALMA not only provided much sharper images than earlier facilities but also allowed astronomers to measure how fast the glowing clouds are moving through space.

These new observations of Herbig Haro 46-47 revealed that some of the ejected material had velocities much higher than had been measured before. This means the outflowing gas carries much more energy and momentum than previously thought.

The team leader and first author of the new study, Héctor Arce (Yale University, USA) explains that “ALMA’s exquisite sensitivity allows the detection of previously unseen features in this source, like this very fast outflow. It also seems to be a textbook example of a simple model where the molecular outflow is generated by a wide-angle wind from the young star.”

The observations were obtained in just 5 hours of ALMA observation time — even though ALMA was still under construction at the time — similar quality observations with other telescopes have taken ten times longer.

“The detail in the Herbig Haro 46-47 images is stunning. Perhaps more stunning is the fact that, for these types of observations, we really are still in the early days. In the future ALMA will provide even better images than this in a fraction of the time,” adds Stuartt Corder (Joint ALMA Observatory, Chile), a co-author on the new paper. 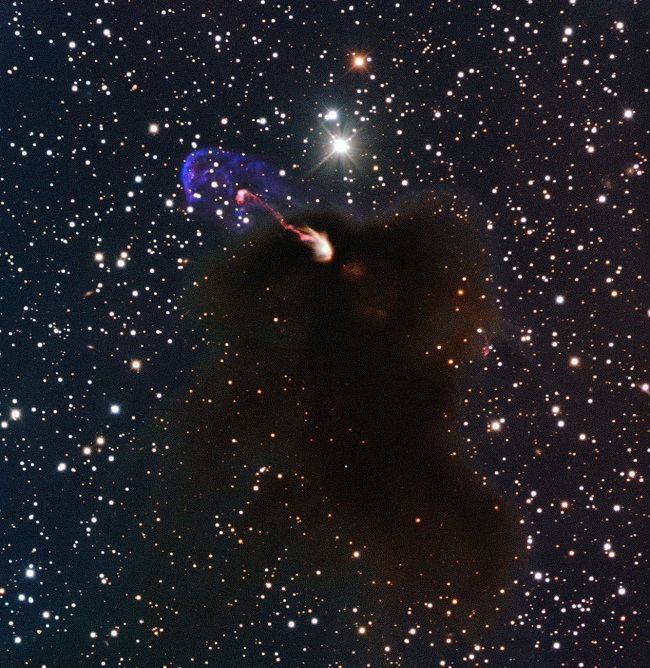 The sharpness and sensitivity achieved by these ALMA observations also allowed the team to discover an unsuspected outflow component that seems to be coming from a lower mass companion to the young star. This secondary outflow is seen almost at right angles to the principal object and is apparently carving its own hole out of the surrounding cloud.

Arce concludes that “ALMA has made it possible to detect features in the observed outflow much more clearly than previous studies. This shows that there will certainly be many surprises and fascinating discoveries to be made with the full array. ALMA will certainly revolutionise the field of star formation!”

[1] The astronomers George Herbig and Guillermo Haro were not the first to see one of the objects that now bear their names, but they were the first to study the spectra of these strange objects in detail. They realised that they were not just clumps of gas and dust that reflected light, or glowed under the influence of the ultraviolet light from young stars, but were a new class of objects associated with ejected material in star formation regions.