News by Subject » Cosmology » A Dynamo on Asteroid Vesta

A meteorite found in Antarctica holds evidence of a once-active dynamo on Vesta.

About 4.6 billion years ago, the Solar System was little more than a tenuous disk of gas and dust. In the span of merely 10 million years, this soup evolved to form today’s massive, complex planets. In the intervening period, however, the Solar System contained a mixture of intermediary bodies — small chunks of rock, the remnants of which today are known as asteroids. 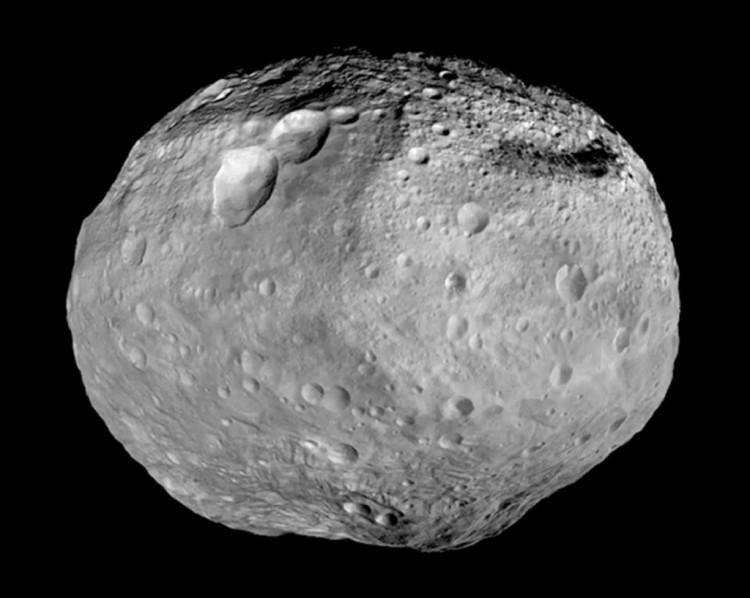 Although not much is known about the early composition of asteroids, some scientists suspect that such information may reveal an unexpected diversity of planetary bodies within the early Solar System.

Now a new study published this week in Science has found evidence that Vesta, the second-most-massive asteroid in the Solar System, once harbored a dynamo — a molten, swirling mass of conducting fluid generating a magnetic field — resembling that in much larger planets like Earth. Researchers at MIT say the findings suggest that asteroids like Vesta may have been more than icy chunks of space debris.

“We’re filling in the story of basically what happened during those first few million years of the Solar System, when an entire Solar System was dominated by objects like this,” says Roger Fu, a graduate student in MIT’s Department of Earth, Atmospheric and Planetary Sciences (EAPS), and the study’s first author. “These bodies are really like miniature planets.”

“Vesta becomes now the smallest known planetary object to have generated a dynamo,” says co-author Benjamin Weiss, an associate professor of planetary sciences in EAPS. “You can imagine many asteroids in the early Solar System were doing this.”

Most or all of the planets in the inner Solar System are thought to have generated dynamos at some point in their histories. In a dynamo, molten-hot iron flows within the core, generating a magnetic field that may last for millions of years. As a result, the rocks on the surface of a planetary body become magnetized, providing a record of a planet’s early history.

Scientists have attempted to characterize the magnetization of meteorites — remnants of asteroids that have fallen to Earth — in order to reconstruct asteroid evolution. But a major challenge has been pinpointing the source of meteorites’ magnetization, which may be formed by any number of processes — such as plasmas from a meteoroid impact, or more mundane causes, like passing a magnet over a meteorite sample. Determining that a meteorite’s magnetic field is the result of an early dynamo is therefore a tricky problem.

To solve the problem, Fu and Weiss collaborated with researchers at the University of California at Berkeley, first to determine the magnetization and the age of a meteorite sample, then to check that the observed magnetic field was, in fact, due to an early dynamo. The group obtained a meteorite sample from Vesta that was originally discovered in Antarctica in 1981. The 50-gram sample, named ALHA81001, retains exceptional magnetic properties that scientists have been examining for years. Fu and his colleagues managed to acquire a one-gram sample of the rock for analysis.

The team first examined the rock’s tiny crystals. When forming in a magnetic field, a rock’s ferromagnetic crystals align in the direction of a background field when the rock is heated. The group measured the alignment of these minerals, or the rock’s magnetic “moment.” The researchers progressively demagnetized the rock until they found the magnetization that they believed to be the oldest remnant of a magnetic field.

The group’s next step was to determine the age of the rock. To do that, UC Berkeley researcher David Shuster analyzed the meteorite for evidence of argon. An isotope of argon called argon-40 is produced from the natural decay of potassium-40. A common technique for determining a rock’s age is to heat the rock and measure the amount of argon-40 released: The more argon-40, the older a rock may be. Through this technique, the researchers determined that the Vesta meteorite is 3.7 billion years old.

However, because Vesta formed 4.5 billion years ago, any early dynamo must have decayed by the time the meteorite now known as ALHA81001 formed. So what is the origin of the field that magnetized this rock?

Fu and Weiss believe that an early dynamo likely magnetized the surface of Vesta within the first 100 million years of the asteroid’s history, magnetizing surface rocks that then persisted over billions of years. When ALHA81001 formed 3.7 billion years ago, it would have also become magnetized due to exposure to fields emanating from the surrounding crust.

Could the magnetization of Vesta’s rocks have been caused by anything other than a dynamo? To rule out other scenarios, the group analyzed the crystals in the meteorite sample to determine the rock’s cooling history. While large impacts might create a magnetic field, such impact-generated fields would only last a few tens of minutes, according to Fu — and if a rock were to become magnetized in such a short period of time, it would also cool equally quickly.

To determine the cooling history — and therefore the magnetization period — of the meteorite sample, the group examined the tiny crystals on the rock’s surface — a technique developed by Timothy Grove, a professor of geology at MIT and a co-author of this week’s Science paper. They found that the rock experienced two periods of cooling: an initial rapid cooling, which produced fine crystals with excellent magnetic recording properties, followed by a much longer period of cooling. This longer cooling phase, Fu believes, is proof that the magnetic field observed in the rock is likely due not to an impact, but to a longer-lived field such as that expected for a dynamo.

The evidence for a dynamo on Vesta lends support to the theory that other small bodies in the Solar System may also have harbored similar dynamos, says Christopher Russell, a professor of geophysics and space physics at the University of California at Los Angeles.

“The moon’s ancient dynamo is given added credibility by this measurement,” Russell says. “Another small body, Jupiter’s moon Ganymede, today appears to have an active dynamo in its core. This measurement makes that interpretation more credible as well.”

“Vesta is so interesting, because it’s one of these building blocks that eventually formed the planets, and this is a remnant that’s still preserved and didn’t end up forming a planet,” Fu says. “It’s only 500 kilometers across, but it actually had many of the same global processes that the Earth has.”