Using images from the 340 Mpx MegaCam camera on the Canada-France-Hawaii Telescope (CFHT) from the summit of Mauna Kea, astronomers identified the massive cluster of young stars NGC 1980 to be a clearly separate entity from the main cluster of the most studied star formation region in the Galaxy. A technique relying on the combination of optical, infrared, and mid-infrared data ensures astronomers are sampling only stars located in the foreground of the Orion Nebula. This technique also led them to the discovery of a nearby small star cluster, baptized L1641W. 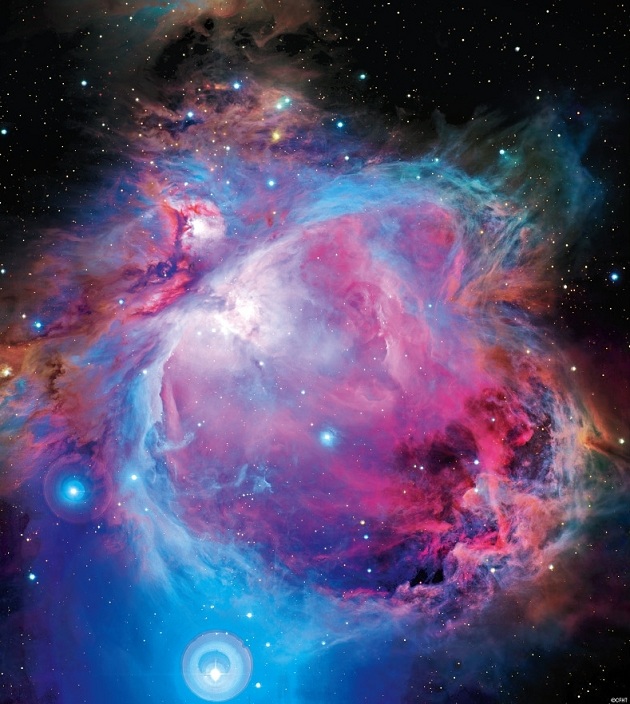 The Orion nebula in the optical by CFHT. Located only 1,500 light years away from our Solar System, the Orion Nebula is the brightest diffuse nebula is the sky. This image shows clearly the 3-dimensional structure of this star formation region: a large cavity, created by the radiation pressure from new-born stars located in the brightest area of the image, lies within a huge cloud of dust and gas. Identified as a truly independent star cluster, NGC 1980 is associated to this well-studied star formation region, around the brightest star seen at the bottom of this image, iota Ori. The disks around the star are the result of internal light reflection in the camera optics. Image Credit: CFHT/Coelum (J.-C. Cuillandre & G. Anselmi)

The Orion Nebula is one of the great wonders of the night sky. Its discovery goes back 400 years ago when it was first described as “fog” in the observing reports of French astronomer Nicolas-Claude Fabri de Peiresc (1610). The discovery of the Orion nebula is intimately associated with the early development of telescopes but only in the last 60 years have we come to realize the true astrophysical importance of this glamorous object: the nebula, like so many in the Milky Way and in other galaxies, form new stars.

Inside the Orion Nebula, astronomers have found over the years a wide range of young stellar and stellar-like objects, from massive ionizing stars tens of times more massive than the Sun down to objects known as brown dwarfs, which are not massive enough to burn hydrogen and become stars. Of all the giant nurseries in our Galaxy, the Orion nebula is the closest to Earth, only 1,500 light-years away. This makes this region very special, offering astronomers the best chance to understand how laws of physics lead to the transformation of molecular clouds of very diffuse gas into hydrogen burning stars, failed stars, as well as planets.

The Orion constellation in the optical and the infrared: the molecular cloud optical shield. The left panel shows an optical image of the Orion constellation: the molecular cloud is invisible at those wavelengths. The middle panel shows the infrared Herschel space observatory 500 micron image over-plotted in red. At this wavelength, Herschel probes the thermal emission of the cold (10~15K) molecular cloud: the newly formed stars are traced through the warming of their surrounding gas clearly detected here. This molecular cloud is so thick that it blocks the visible light of any background sources, acting like a shield. In consequence, any star detected in the optical in the line of sight over the region highlighted in the right panel must therefore be located in the foreground of the molecular cloud. Image Credit: J. Alves & H. Bouy

Not surprisingly, astronomers see the Orion Nebula as the benchmark for star formation studies, a true golden standard, and most of the established measurements of how stars form have been derived from this important region. For example, the distribution of stellar and brown dwarfs masses at birth, their relative age, their spatial distribution, and the properties of the planet forming circumstellar disks surrounding the young stars.

But as it turns out, reality is more complicated. Recent observations of the Orion Nebula from the Canada-France-Hawaii Telescope (CFHT) with the 340 Mpx MegaCam camera coupled to previous observations with ESA’s Herschel and XMM-Newton, NASA’s Spitzer and WISE, as well as 2MASS and Calar Alto, revealed the cluster known as NGC 1980 as being a clearly distinct massive cluster of slightly older stars in front of the nebula. Although astronomers knew of the presence of a foreground stellar population since the 1960s, the new CFHT observations revealed that this population is more massive than first thought, and it is not uniformly distributed, clustering around the star iota Ori at the southern tip of Orion’s Sword. 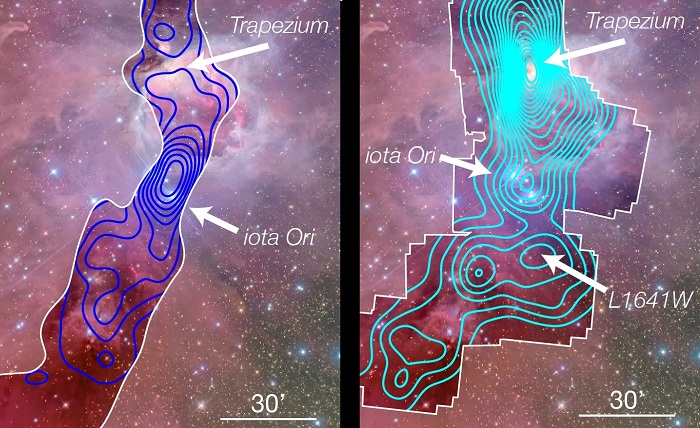 Star density maps from optical data with CFHT and X-ray data with XMM-Newton. Left: when selecting optical sources in the line of sight of the thick molecular cloud, astronomers are sure to select only foreground stars. Based on CFHT MegaCam data, J. Alves and H. Bouy discovered a clustering of stars around the massive iota Ori O-star, illustrated by the star density contours in blue. The Trapezium cluster, which is deeply embedded within the molecular cloud, does not even appear in these density contours of foreground stars. Right: unlike visible photons, which are blocked by the thick molecular cloud, X-ray photons go through the cloud, just like they go through skin in medical imaging. All the stars behind, within and in front of the cloud will be detected. The spatial distribution of X-ray sources, represented by cyan contours, is clustered around the massive Trapezium cluster, as was previously known. But a second peak is also clearly visible around the position of iota Ori, providing an independent confirmation of the results obtained at optical wavelengths with the CFHT. The spatial density of X-ray sources also allowed J. Alves and H. Bouy to discover yet another new cluster of young stars they named L1641W, located south of iota Ori. Image Credit: J. Alves & H. Bouy / Background photograph Credit: Jon Christensen

The importance of this discovery is two fold: first, the cluster identified as a separate entity is only a slightly older sibling of the Trapezium cluster at the heart of the Orion nebula, and second, what astronomers have been calling the Orion Nebula Cluster is actually a complicated mix of these two clusters.

Hervé Bouy, from the European Space Astronomy Centre in Madrid, one of the two authors of this work, explains that “we need refine what we thought were the most robust star and cluster formation observables.” He points out the need for a long follow-up work on Orion where “we must untangle these two mixed populations, star by star, if we are to understand the region, and star formation in clusters, and even the early stages of planet formation.”

“For me the most intriguing part is that the older sibling, the iota Ori cluster, is so close to the younger cluster still forming stars inside the Orion nebula” says João Alves for the University of Vienna. “It is hard to see how these new observations fit into any existing theoretical model of cluster formation, and that is exciting because it suggests we might be missing something fundamental. Clusters are very likely the favorite mode of star formation in the Universe, but we are still far from understanding why that is exactly.”

The article published in the Astronomy & Astrophysicsjournal (November 2012 issue) can be consulted here.