Astronomers have discovered a veritable rogues’ gallery of odd exoplanets — from scorching hot worlds with molten surfaces to frigid ice balls. And while the hunt continues for the elusive “blue dot” — a planet with roughly the same characteristics as Earth — new research reveals that life might actually be able to survive on some of the many exoplanetary oddballs that exist. Eccentric Habitable Zones: While Earth and the other planets in our Solar System travel around the Sun in near-circular orbits, planets in other systems can have more comet-like orbits in which the distance from the planet to star varies. Such orbits, termed eccentric, would cause the planet to move in and out of the habitable zone. A habitable zone, shown in green here, is defined as the region around a star where liquid water, an essential ingredient for life as we know it, could potentially be present. Earth always remains in its habitable zone. The hypothetical planet is depicted here moving through the habitable zone and then further out into a long, cold winter. During this phase of the orbit, any liquid water on the planet will freeze at the surface; however, the possibility remains that life could, in theory, hibernate beneath the surface. Image Credit: NASA/JPL-Caltech

“When we’re talking about a habitable planet, we’re talking about a world where liquid water can exist,” said Stephen Kane, a scientist with the NASA Exoplanet Science Institute at the California Institute of Technology in Pasadena. “A planet needs to be the right distance from its star — not too hot and not too cold.” Determined by the size and heat of the star, this temperature range is commonly referred to as the “habitable zone” around a star.

Kane and fellow Exoplanet Science Institute scientist Dawn Gelino have created a resource called the “Habitable Zone Gallery.” It calculates the size and distance of the habitable zone for each exoplanetary system that has been discovered and shows which exoplanets orbit in this so-called “goldilocks” zone. The Habitable Zone Gallery can be found at www.hzgallery.org . The study describing the research appears in the Astrobiology journal and is available at http://arxiv.org/abs/1205.2429 .

“Planets like these may spend some, but not all of their time in the habitable zone,” Kane said. “You might have a world that heats up for brief periods in between long, cold winters, or you might have brief spikes of very hot conditions.” 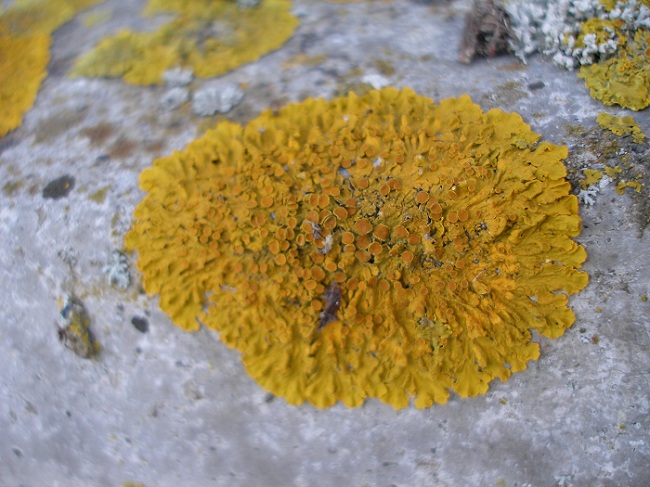 An example of a lichen that was exposed to space conditions on the International Space Station for 18 months. Some lichens survived the ordeal and continued to grow in the laboratory. Image Credit: Creative Commons-N. McAuley

Though planets like these would be very different from Earth, this might not preclude them from being able to support alien life. “Scientists have found microscopic life forms on Earth that can survive all kinds of extreme conditions,” Kane said. “Some organisms can basically drop their metabolism to zero to survive very long-lasting, cold conditions. We know that others can withstand very extreme heat conditions if they have a protective layer of rock or water. There have even been studies performed on Earth-based spores, bacteria and lichens, which show they can survive in both harsh environments on Earth and the extreme conditions of space.”

Kane and Gelino’s research suggests that habitable zone around stars might be larger than once thought, and that planets that might be hostile to human life might be the perfect place for extremophiles, like lichens and bacteria, to survive. “Life evolved on Earth at a very early stage in the planet’s development, under conditions much harsher than they are today,” Kane said.

Kane explained that many life-harboring worlds might not be planets at all, but rather moons of larger, gas-giant planets like Jupiter in our own Solar System. “There are lots of giant planets out there, and all of them may have moons, if they are like the giant planets in the Solar System,” Kane says. “A moon of a planet that is in or spends time in a habitable zone can be habitable itself.”

As an example, Kane mentioned Titan, the largest moon of Saturn, which, despite its thick atmosphere, is far too distant from the Sun and too cold for life as we know it to exist on its surface. “If you moved Titan closer in to the Sun, it would have lots of water vapor and very favorable conditions for life.”

Kane is quick to point out that there are limits to what scientists can presently determine about habitability on already-discovered exoplanets. “It’s difficult to really know about a planet when you don’t have any knowledge about its atmosphere,” he said. For example, both Earth and Venus experience an atmospheric “greenhouse effect” — but the runaway effect on Venus makes it the hottest place in the Solar System. “Without analogues in our own Solar System, it’s difficult to know precisely what a habitable moon or eccentric planet orbit would look like.”

Still, the research suggests that habitability might exist in many forms in the galaxy — not just on planets that look like our own. Kane and Gelino are hard at work determining which already-discovered exoplanets might be candidates for extremophile life or habitable moons. “There are lots of eccentric and gas giant planet discoveries,” Kane says. “We may find some surprises out there as we start to determine exactly what we consider habitable.”