The discovery of a giant planet orbiting its star at 650 times the average Earth-Sun distance has astronomers puzzled over how such a strange system came to be. 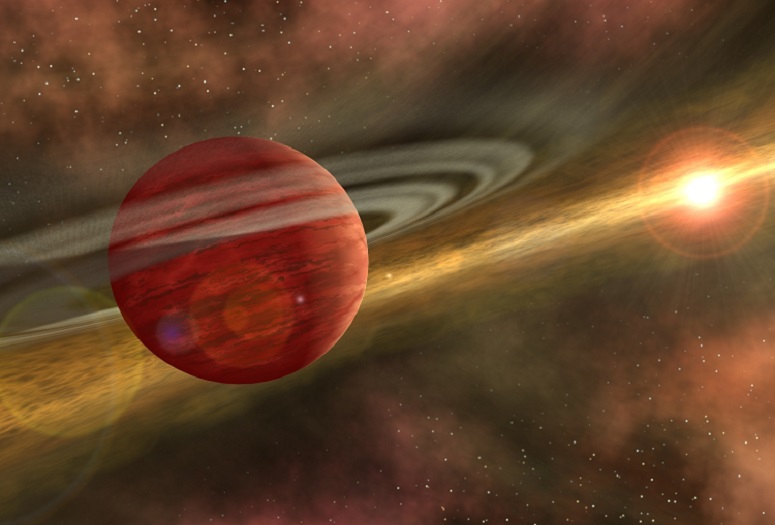 This is an artist’s conception of a young planet in a distant orbit around its host star. The star still harbors a debris disk, remnant material from star and planet formation, interior to the planet’s orbit (similar to the HD106906 system). Image Credit: NASA/JPL-Caltech

An international team of astronomers, led by a University of Arizona graduate student, has discovered the most distantly orbiting planet found to date around a single, Sun-like star. It is the first exoplanet – a planet outside of our Solar System – discovered at the UA.

Weighing in at 11 times Jupiter’s mass and orbiting its star at 650 times the average Earth-Sun distance, planet HD 106906 b is unlike anything in our own Solar System and throws a wrench in planet formation theories. “This system is especially fascinating because no model of either planet or star formation fully explains what we see,” said Vanessa Bailey, who led the research. Bailey is a fifth-year graduate student in the UA’s Department of Astronomy.

It is thought that planets close to their stars, like Earth, coalesce from small asteroid-like bodies born in the primordial disk of dust and gas that surrounds a forming star. However, this process acts too slowly to grow giant planets far from their star. Another proposed mechanism is that giant planets can form from a fast, direct collapse of disk material. However, primordial disks rarely contain enough mass in their outer reaches to allow a planet like HD 106906 b to form. Several alternative hypotheses have been put forward, including formation like a mini binary star system.

“A binary star system can be formed when two adjacent clumps of gas collapse more or less independently to form stars, and these stars are close enough to each other to exert a mutual gravitation attraction and bind them together in an orbit,” Bailey explained. “It is possible that in the case of the HD 106906 system the star and planet collapsed independently from clumps of gas, but for some reason the planet’s progenitor clump was starved for material and never grew large enough to ignite and become a star.” 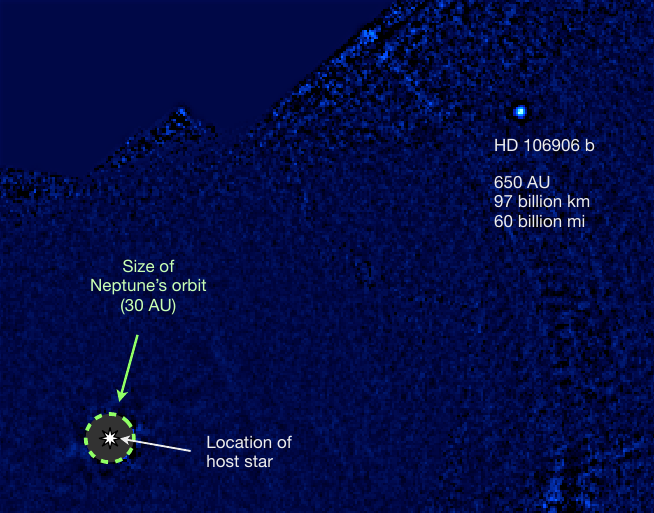 This is a discovery image of planet HD 106906 b in thermal infrared light from MagAO/Clio2, processed to remove the bright light from its host star, HD 106906 A. The planet is more than 20 times farther away from its star than Neptune is from our Sun. AU stands for Astronomical Unit, the average distance of the Earth and the Sun. Image Credit: Vanessa Bailey

This system is also of particular interest because researchers can still detect the remnant “debris disk” of material left over from planet and star formation. “Systems like this one, where we have additional information about the environment in which the planet resides, have the potential to help us disentangle the various formation models,” Bailey added. “Future observations of the planet’s orbital motion and the primary star’s debris disk may help answer that question.”

At only 13 million years old, this young planet still glows from the residual heat of its formation. Because at 2,700 Fahrenheit (about 1,500 degrees Celsius) the planet is much cooler than its host star, it emits most of its energy as infrared rather than visible light. Earth, by comparison, formed 4.5 billion years ago and is thus about 350 times older than HD 106906 b.

Direct imaging observations require exquisitely sharp images, akin to those delivered by the Hubble Space Telescope. To reach this resolution from the ground requires a technology called Adaptive Optics, or AO. The team used the new Magellan Adaptive Optics (MagAO) system and Clio2 thermal infrared camera – both technologies developed at the UA – mounted on the 6.5 meter-diameter Magellan telescope in the Atacama Desert in Chile to take the discovery image.

Vanessa Bailey, a fifth year student at the Steward Observatory of the UA’s Department of Astronomy.

UA astronomy professor and MagAO principal investigator Laird Close said: “MagAO was able to utilize its special Adaptive Secondary Mirror, with 585 actuators, each moving 1,000 times a second, to remove the blurring of the atmosphere. The atmospheric correction enabled the detection of the weak heat emitted from this exotic exoplanet without confusion from the hotter parent star.”

“Clio was optimized for thermal infrared wavelengths, where giant planets are brightest compared to their host stars, meaning planets are most easily imaged at these wavelengths,” explained UA astronomy professor and Clio principal investigator Philip Hinz, who directs the UA Center for Astronomical Adaptive Optics.

The team was able to confirm that the planet is moving together with its host star by examining Hubble Space Telescope data taken eight years prior for another research program. Using the FIRE spectrograph, also installed at the Magellan telescope, the team confirmed the planetary nature of the companion. “Images tell us an object is there and some information about its properties but only a spectrum gives us detailed information about its nature and composition,” explained co-investigator Megan Reiter, a graduate student in the UA Department of Astronomy. “Such detailed information is rarely available for directly imaged exoplanets, making HD 106906 b a valuable target for future study.”

“Every new directly detected planet pushes our understanding of how and where planets can form,” said co-investigator Tiffany Meshkat, a graduate student at Leiden Observatory in the Netherlands. “This planet discovery is particularly exciting because it is in orbit so far from its parent star. This leads to many intriguing questions about its formation history and composition. Discoveries like HD 106906 b provide us with a deeper understanding of the diversity of other planetary systems.”

The research paper, “HD 106906 b: A Planetary-mass Companion Outside a Massive Debris Disk” has been accepted for publication in The Astrophysical Journal Letters and will appear in a future issue.

Source: The University of Arizona (UA)