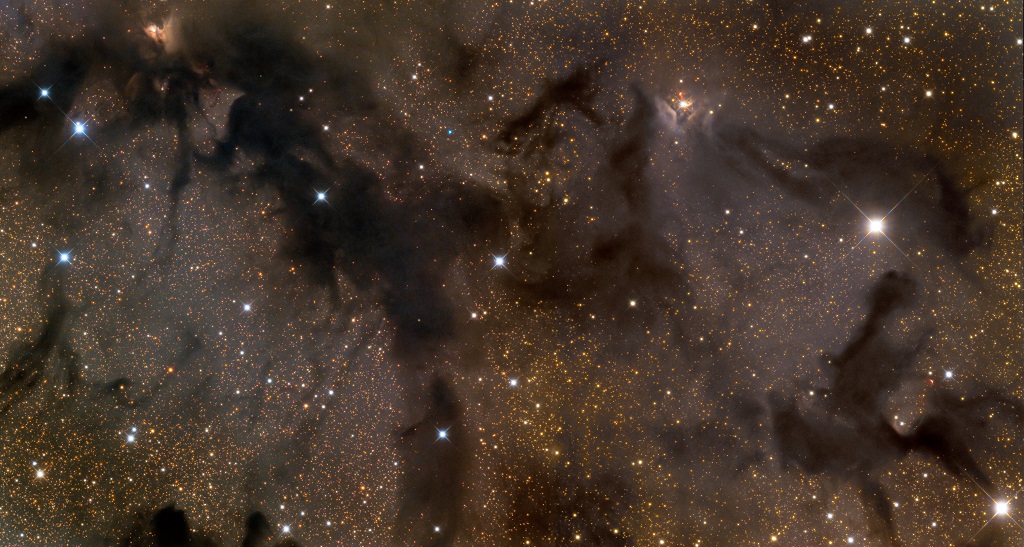 LDN 673 (Lynds’ Dark Nebula 673) is a highly fractured and very dense dark cloud complex of about 7 light-years across, located in the center of the Aquila Rift, some 300 – 600 light-years from Earth in the northern constellation of Aquila (the Eagle).

The Aquila Rift forms a great mass of dark molecular clouds along the summer Milky Way through the constellations Aquila, Serpens, and eastern Ophiuchus. It consists of numerous small and large clouds, many of which have been identified and tabulated by B.T. Lynds (in 1962).

Together with the Vulpecula Rift and the Cygnus Rift or Northern Coalsack, it is part of the so-called Great Rift (also Dark Rift, or Dark River), which is a series of overlapping, non-luminous, molecular dust clouds that are located between the Solar System and the Sagittarius Arm of the Milky Way Galaxy.

The Great Rift appears as a dark lane that obscures the bright star fields behind it, splitting the crowded plane of our Milky Way galaxy into two as seen from Earth. These clouds are estimated to contain about 1 million solar masses of plasma and dust.

In silhouette against the Milky Way’s faint starlight, LDN 673’s dusty molecular clouds likely contain raw material to form hundreds of thousands of stars and astronomers eagerly search the clouds for telltale signs of star birth. Visible indications of energetic outflows associated with young stars include the small red tinted nebulosity RNO 109 (at top left of this image) and Herbig-Haro object HH 32 (above and right of center).

You can find LDN 673 in the summer skies near bright star Altair and the Summer Triangle (Coordinates: RA 19h 20m 55s).

This image is created from observations in April and May 2012 with a SBIG STX16803 CCD Camera on the 32-inch Schulman Telescope (RCOS) at the Mount Lemmon SkyCenter, using Astrodon Gen II filters.