N11, an emission nebula in the LMC 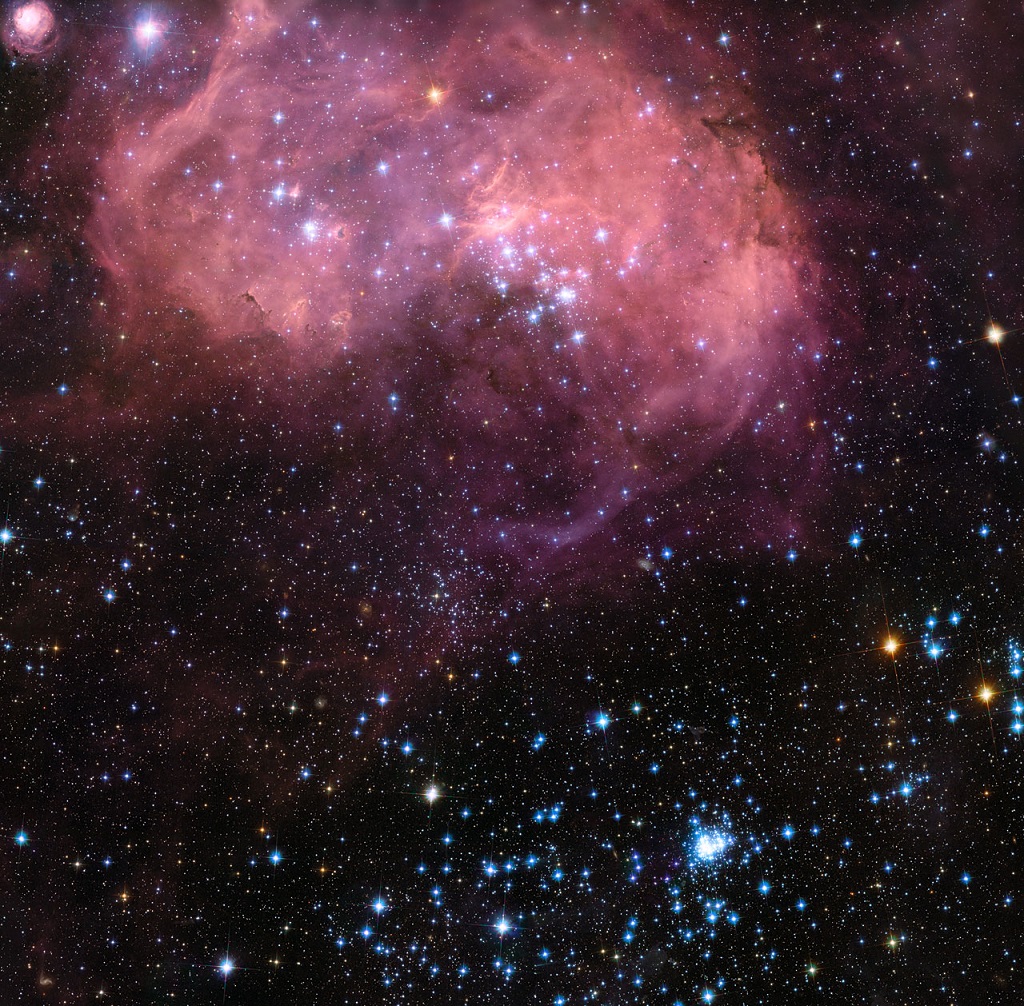 LHA 120-N 11 (N11 for short, or the Bean Nebula for its distinctive overall shape) is a very bright emission nebula of more than 1,000 light-years across in the Large Magellanic Cloud, a satellite galaxy of the Milky Way, located about 163,000 light-years away from Earth in the southern constellation of Dorado (the Swordfish). It is part of a complex network of gas clouds and star clusters, and is one of the most active star formation regions in the nearby Universe.

N11 consists of several adjacent pockets of gas and star formation of which the brightest are surrounding the open star clusters NGC 1763 and NGC 1769. The many bright, hot young stars within the star clusters are emitting intense ultraviolet light and causing the gas to glow. At the bottom of the image lies an open cluster of older stars, which are completely stripped of their initial gaseous envelope.

The Large Magellanic Cloud contains many bright bubbles of glowing gas, and N11 is an example of a superbubble filled with gas blown into the interstellar medium by multiple supernovae and stellar winds.

This cosmic superbubble is expanding outwards due to an interaction between two destructive forces generated by the stars in the nebula: 1) young stars in the clusters send out streams of charged particles, known as stellar winds, that have cleared out the bubble center, and 2) massive stars have exploded to create supernovae shock waves that push the gas out further.

As the hot and compressed bubble of material expands it ploughs into the surrounding material compressing it as well and trigging new star formation at the edges of the region. N11 has produced some of the most massive stars known.

While nebulae are mostly made of hydrogen, the simplest and most plentiful element in the Universe, dust clouds in N11 are home to heavier and more complex elements, which go on to form rocky planets like the Earth. Much finer than household dust (it is more like smoke), this interstellar dust consists of material expelled from previous generations of stars as they died.

The LMC is in an ideal position for astronomers to study the phenomena surrounding star formation. It lies in a location in the sky, far enough from the plane of the Milky Way that it is neither outshone by too many nearby stars, nor obscured by the dust in the Milky Way’s centre. It is also close enough to study in detail (less than a tenth of the distance of the Andromeda Galaxy, the closest spiral galaxy), and lies almost face-on to us, giving us a bird’s eye view.

This image was taken with the Advanced Camera for Surveys on the NASA/ESA Hubble Space Telescope, using five different filters.