RCW 120, an emission nebula in Scorpius 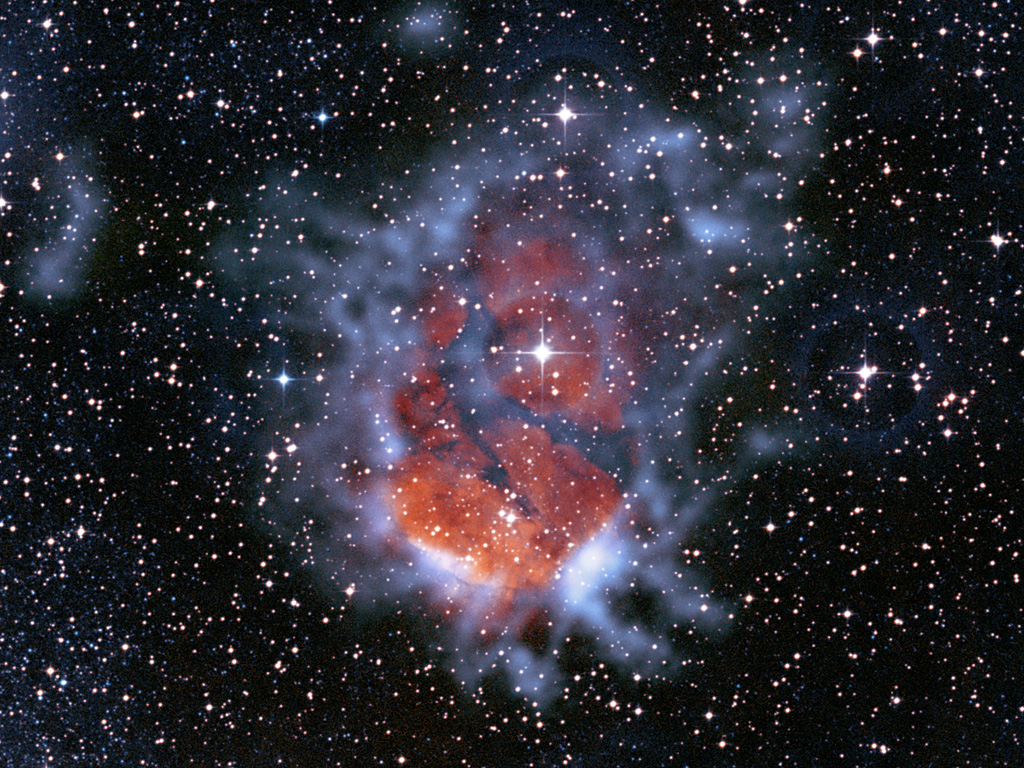 RCW 120 (also known as Sh2-3 and Gum 58) is an emission nebula, a star-forming (H II) region of about ten light-years across, located some 4,300 light-years away from Earth in the southern constellation of Scorpius (the Scorpion), slightly above the plane of our Milky Way galaxy.

It is number 120 in the RCW Catalogue (first published in 1960), named after Alexander William Rodgers, Colin T. Campbell and John Bolton Whiteoak, who led by Bart Bok, catalogued 182 southern nebulae.

The expanding galactic bubble has been formed by a giant O-type star (the most massive type of star known to exist) at its center which pushes on the surrounding dust and gas with nothing more than the power of its starlight. In the 2.5 million years the star has existed it has caused the surrounding material to collapse into dense clumps, triggering a fresh round of starbirth.

One of the new stars is a large embryonic star, not yet sparked by fusion, triggered into formation by the power of the central star. This baby star is set to turn into one of the biggest and brightest stars in our Milky Way within the next few hundred thousand years. It already contains eight to ten times the mass of the Sun and can only get bigger because it is surrounded by a cloud containing an additional 2,000 solar masses. Not all of that will fall onto the star, even the largest stars in the galaxy do not exceed 150 solar masses.

Massive stars have a profound influence on their environment. Because they end their lives in supernova explosions, they control the dynamical and chemical evolution of the galaxy, creating heavy elements like iron and putting them in the interstellar medium. They also inject a lot of energy into the galaxy.

This image is a colour composite of RCW 120. The 870-micron submillimeter-wavelength data were taken with the LABOCA camera on the 12-m Atacama Pathfinder Experiment (APEX) telescope. Here, the submillimeter emission is shown as the blue clouds surrounding the reddish glow of the ionized gas (shown with data from the SuperCosmos H-alpha survey). The image also contains data from the Second Generation Digitized Sky Survey (I-band shown in blue, R-band shown in red).