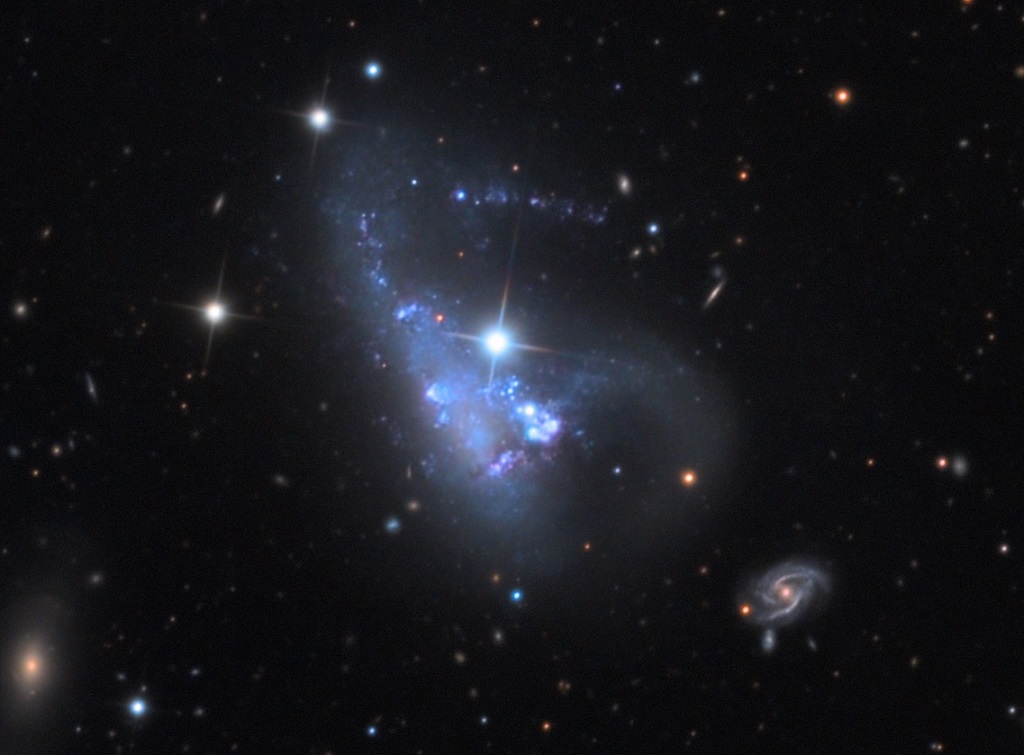 NGC 3239 (also known as the Loony Galaxy and Arp 263) is an irregular galaxy of some 40,000 light-years across, located only about 25 million light-years away from Earth in the constellation of Leo (the Lion). It is receding from us at approximately 753 kilometers per second.

The galaxy as we see it now is most likely the result of a galaxy merger. It shows a possible remnant of disk structure, tidal tails of stars (even though there are no nearby companions), many star-forming regions including a giant one, and young blue star clusters, indicating recent star formation.

The first known supernova of 2012 occurred in this galaxy. The Type II supernova, named SN 2012A (the white dot just below and right of the bright foreground star), was discovered early January 2012 by supernova hunters Bob Moore, Jack Newton, and Tim Puckett. Based on the light-travel time to NGC 3239, the supernova explosion itself occurred 25 million years ago, triggered by the core collapse of a massive star.

A supernova occurs when a star explodes in the final phase of its life. The exploding star can become billions of times as bright as the Sun before gradually fading from view. At its maximum brightness, the exploded star may outshine an entire galaxy.

Supernova explosions are enriching the Universe with heavy chemical elements like oxygen, iron and silicon, necessary to build new generations of stars and planets, and to create life.

In this image, taken in January 2012 with an SBIG STX16803 CCD Camera on the 32-inch Schulman Telescope (RCOS) at the Mount Lemmon SkyCenter, NGC 3239 lies in the center of a myriad of background galaxies and foreground stars. (The galaxy below and right of NGC 3239 might be PGC 30585.)