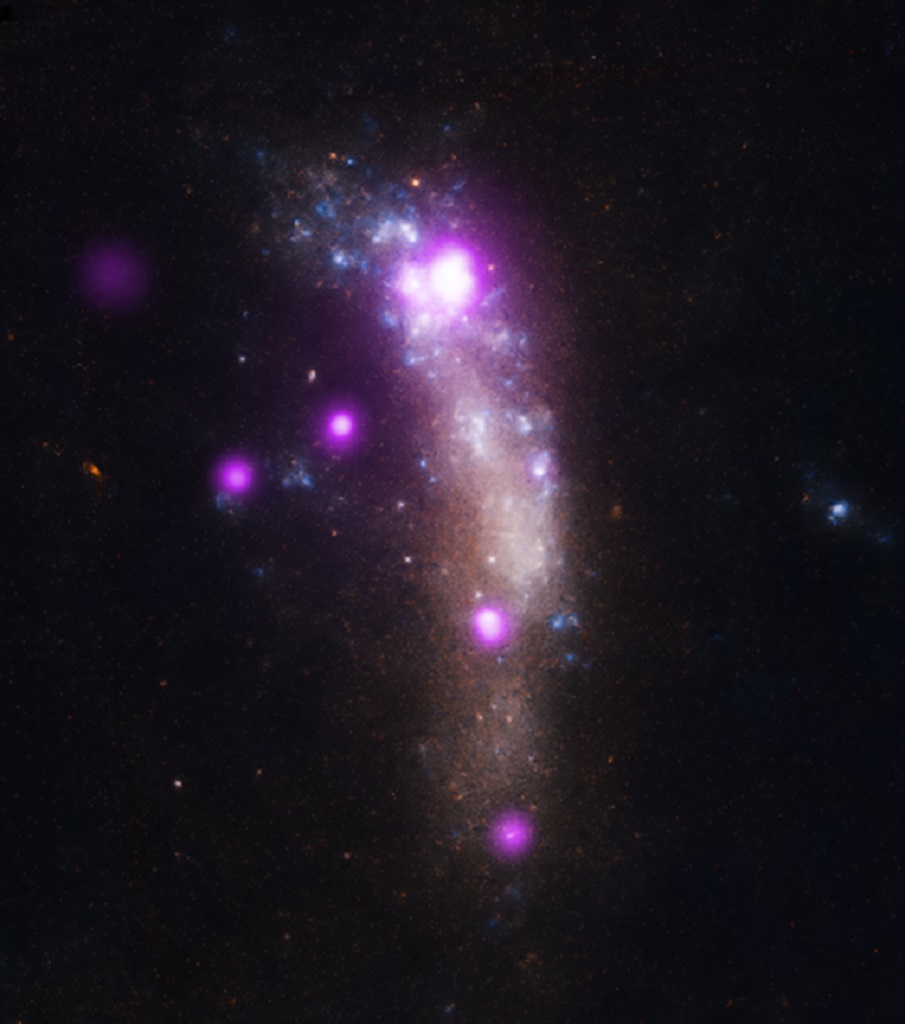 UGC 5189 is an irregular galaxy of about 36,000 light-years across that lies some 163 million light-years away from Earth in the constellation of Leo (the Lion), while it is speeding away from us at approximately 3207 kilometers per second. Instead of being one galaxy, UGC 5189 might as well be a chain of disrupted galaxies. The upper part carries the separate designation of UGC 5189A.

In the first Chandra observation of SN 2010jl, the X-rays from the explosion’s blast wave were strongly absorbed by a cocoon of dense gas around the supernova. This cocoon was formed by gas blown away from the massive star before it exploded.

In the second observation taken almost a year later, there was much less absorption of X-ray emission, indicating that the blast wave from the explosion has broken out of the surrounding cocoon. The gas emitting the X-rays has a very high temperature — greater than 100 million degrees Kelvin – strong evidence that it has been heated by the supernova blast wave.

The energy distribution, or spectrum, of SN 2010jl in optical light reveals features that are probably explained by the following scenario: matter around the supernova has been heated and ionized (electrons stripped from atoms) by X-rays generated when the blast wave plows through this material.

These observations have provided the first X-ray evidence of a supernova shock wave breaking through a cocoon of gas surrounding the star that exploded. This discovery supports the idea that some of the unusually luminous supernovae are caused by the blast wave from their explosion ramming into the material around it.

In a rare example of a cosmic coincidence, analysis of the X-rays from the supernova shows that there is a second unrelated source at almost the same location as the supernova. These two sources strongly overlap one another as seen on the sky. This second source is likely to be an ultraluminous X-ray source, possibly containing an unusually heavy stellar-mass black hole, or an intermediate mass black hole.

This composite image, created by 3 observations between 7 Dec 2010 and 17 Oct 2011, shows X-ray data from Chandra in purple and optical data from the Hubble Space Telescope in red, green and blue. SN 2010jl is the very bright X-ray source near the top of the galaxy.