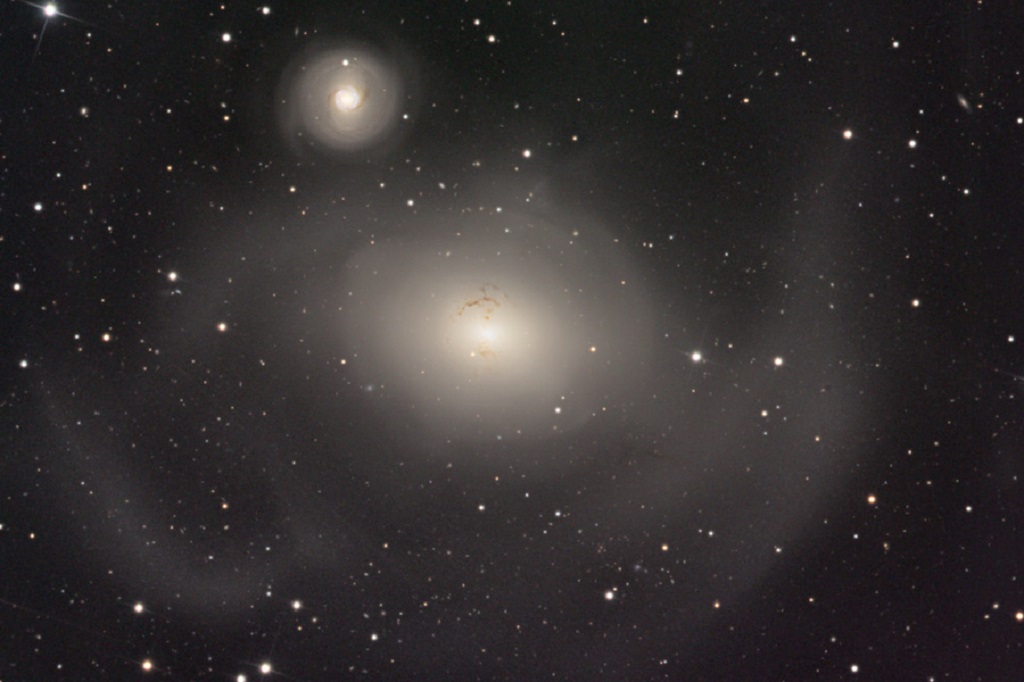 NGC 1316 (also known as Fornax A or Arp 154) is a giant lenticular galaxy that lies around 62 million light-years away from Earth in the southern constellation of Fornax, while it is racing away from us at about 1,760 kilometers per second. Although NGC 1316 lies at the edge, it is the brightest member of the Fornax Cluster, a cluster of 58 galaxies in the Fornax constellation.

NGC 1316 is probably interacting with NGC 1317, the small spiral galaxy to the north. However, that small galaxy does not appear to be sufficiently large enough to cause the distortions seen in the structure of this galaxy. From Earth, it is situated near three other galaxies, namely the spiral galaxies 1316A (officially PGC 12686) and NGC 1316B (PGC 12687), and the lenticular galaxy NGC 1316C (PGC 12769).

NGC 1316’s violent history is evident in various ways. The galaxy has some unusual dust lanes embedded within a much larger envelope of stars. Near the center is a compact disk of gas that appears inclined relative to the stars and that appears to rotate faster than the stars. Lots of small and very faint star clusters, of which many are so small that they are barely held together by the mutual gravity of their constituent stars (these belong to a rare class of red star clusters) are also concentrated in the central region of NGC 1316. The outer envelope contains many complex ripples, loops and plumes. Together this all gives evidence that the giant galaxy was formed from a major collision of two gas-rich spiral galaxies that merged together some 3 billion years ago to shape NGC 1316 as it appears today.

The merger may have fueled the central supermassive black hole, that has an estimated mass of 130-150 million solar masses, causing the galaxy to become a radio galaxy, with radio lobes extending over several degrees of sky (well off this image). It is the fourth-brightest radio source in the sky (at 1400 MHz).

Amongst the loops and plumes (the so-called “tidal” features), the narrow ones are believed to be the stellar remains of other spiral galaxies that merged with NGC 1316 sometime during the last few billion years. The complicated system of dust lanes and patches of the inner regions of the galaxy are thought to be the remains of the interstellar medium associated with one or more of the spiral galaxies swallowed by NGC 1316.