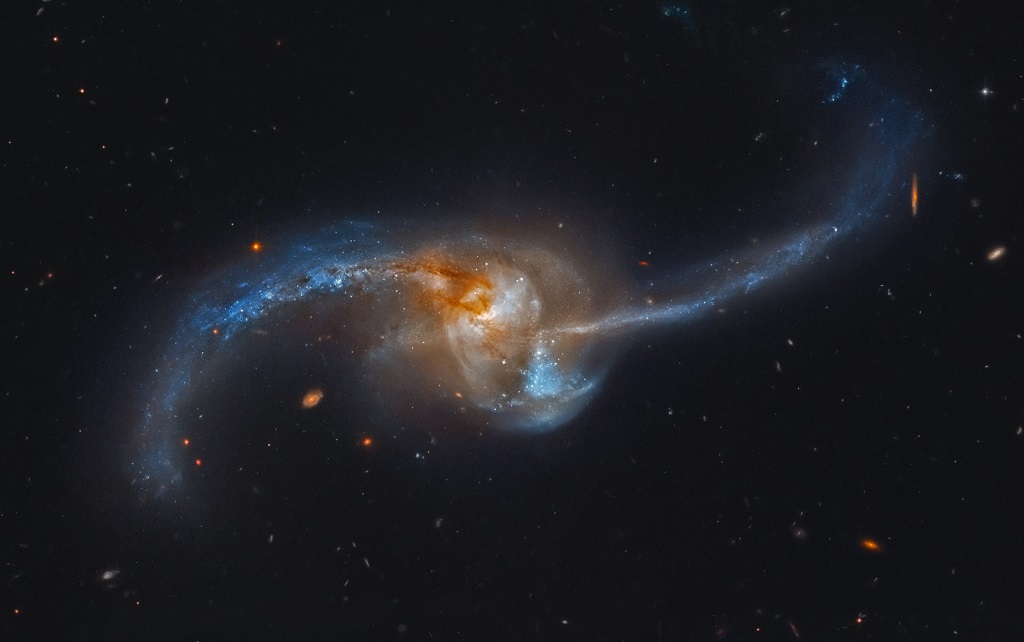 NGC 2623 (also known as Arp 243) is a pair of merging galaxies of roughly 50,000 light-years across, located about 253 million light-years away from Earth in the northern constellation of Cancer (the Crab), while it is speeding away from us at approximately 5,549 kilometers per second.

Interacting galaxies have a dramatic effect on each other. When galaxies approach one another, massive amounts of gas are pulled from each galaxy towards the center of the other, until ultimately, the two merge into one massive galaxy. Here we are witnessing the final stages of a titanic galaxy merger of two galaxies that are becoming one.

The centers of the original galaxy pair has already merged into one, very distorted and spectacularly bright core, but stretching out from the center are two striking long tidal tails of young stars and hot, bright young clusters of stars that heat and light up the gases surrounding them. These tidal tails are a strong indicator that a merger is taken place. During such a collision, the dramatic exchange of mass and gases initiates star formation, seen here in both the tails.

The prominent upper tail in this image is richly populated with about a hundred (!) bright star clusters. These star clusters may have formed as part of a loop of stretched material associated with the lower tail, or they may have formed from debris falling back onto the nucleus. In addition to this active star-forming region, both galactic arms harbor very young stars in the early stages of their evolution.

The star formation and its active galactic nucleus, filled with exceptionally large numbers of bright young stars, causes NGC 2623 to be classified as a Seyfert galaxy, which are galaxies with extremely bright nuclei that produce spectral line emission from highly ionized gas. The centers of Seyfert galaxies have active galactic nuclei (AGNs), and usually contain supermassive black holes with masses between 10 and 100 million solar masses.

A Type Ia supernova, designated SN 1999gd, has been discovered in this galaxy in November 1999 (by Lick Observatory Supernova Search). This type of supernova is a result from the violent explosion of a white dwarf star (a compact star that has ceased fusion in its core).

This sharp image of NGC 2623 also reveals even more distant background galaxies scattered through the field of view.