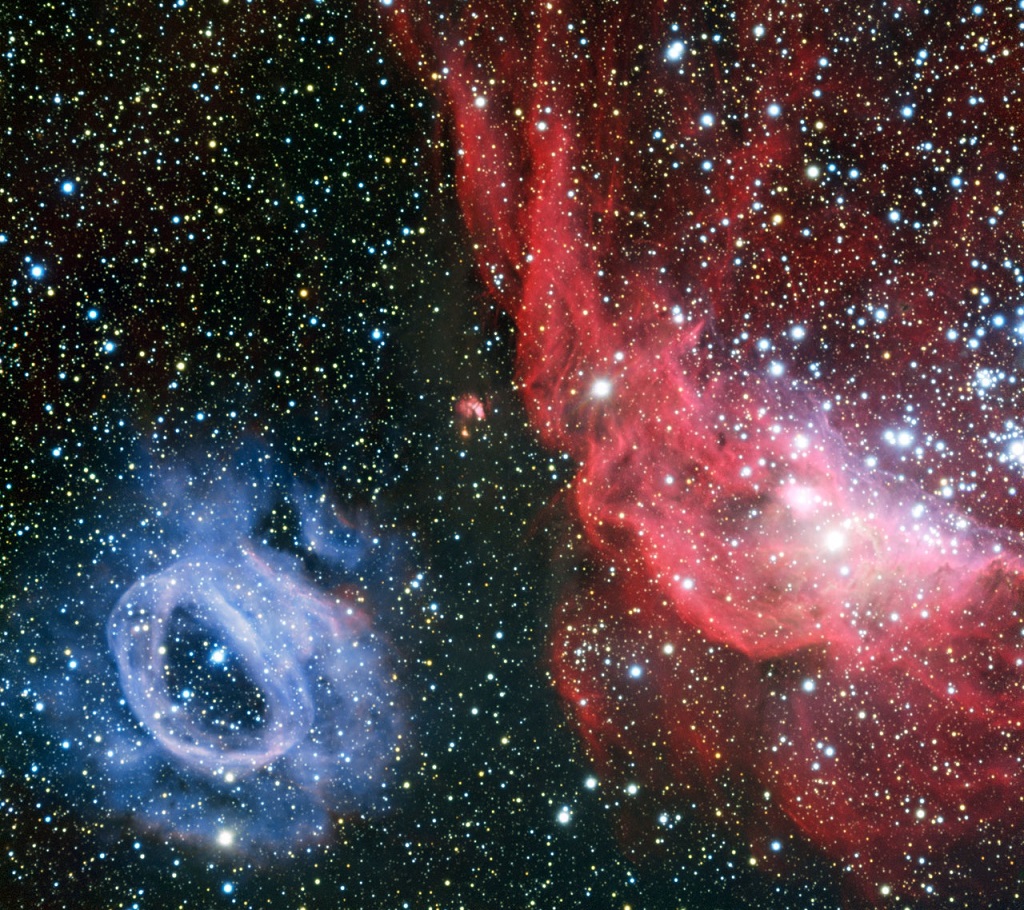 NGC 2014 (irregularly-shaped and red) and its neighbor NGC 2020 (round and blue) are two brightly glowing nebulae in the Large Magellanic Cloud (LMC), a satellite galaxy to our own Milky Way, located about 163,000 light-years away from Earth in the southern constellation of Dorado, (the Swordfish).

The Large Magellanic Cloud is a very active star-forming galaxy. The most massive region of star formation is 30 Doradus (also known as the Tarantula Nebula). However, one of the more intriguing stellar nurseries is NGC 2014 (also known Henize 55).

NGC 2014 is an emission nebula – made up of mostly hydrogen gas – which contains an open cluster of hot, young stars, almost hidden in the brightest part of the nebula. The energetic ultraviolet light from these stars is absorbed by the hydrogen gas and produces the distinctive red glow from an enormous distance around the cluster.

As well as radiating strongly in ultraviolet light (a result of their high temperature), that causes these nebulae to glow brightly, massive young stars also produce vigorous stellar winds. Eventually they will disperse the hydrogen around them, evacuating a bubble-like nebula.

To the left of the open cluster in NGC 2014, a single brilliant and very hot, newborn star seems to have started this process, creating a cavity that appears encircled by a round, bubble-like nebula called NGC 2020. The distinctive bluish color of NGC 2020 is also created by radiation from the hot star – this time by ionizing oxygen instead of hydrogen.

The strikingly different colors of NGC 2014 and NGC 2020 are the result of both the different chemical makeup of the surrounding gas and the temperatures of the stars that are causing the clouds to glow. The distances between the stars and the respective gas clouds also play a role.

This image was taken by the Very Large Telescope on Cerro Paranal in the Atacama Desert of northern Chile.