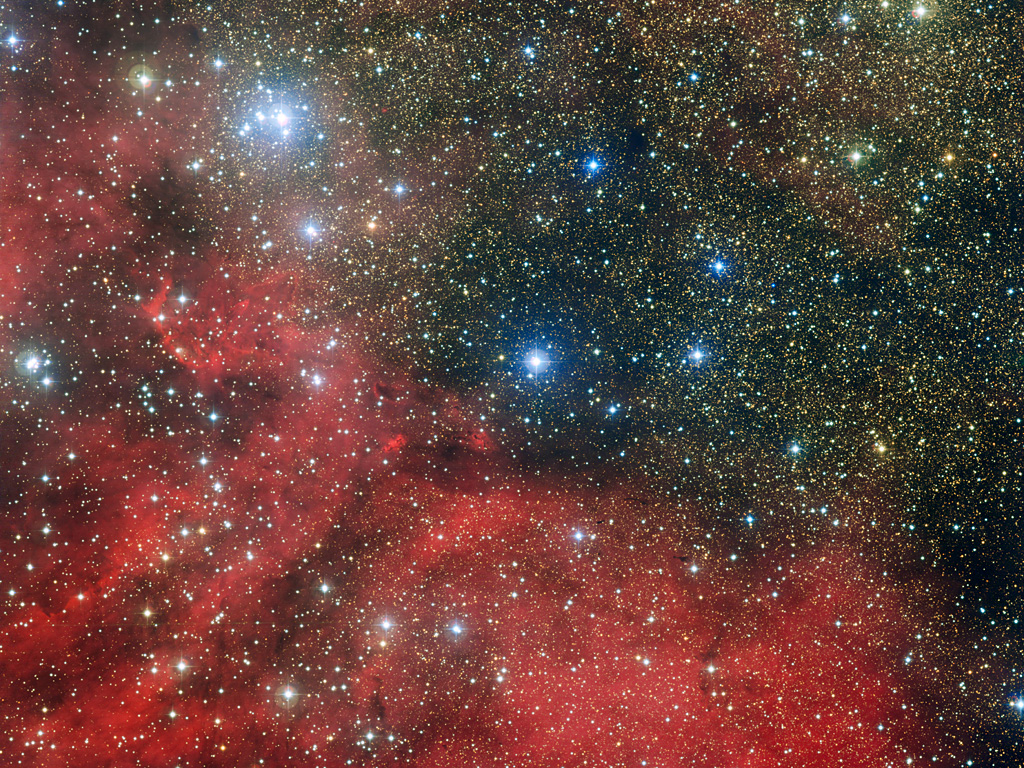 NGC 6604 (the bright grouping of stars towards to the upper left of this image) is a very young open star cluster with an age of some 4-5 million years in the star-forming (H II) region Sh2-54, located about 5,540 light-years away from Earth in the northern constellation of Serpens Cauda (the Serpent’s Tail).

NGC 6604 is the densest part of a more widely scattered association – called Serpens OB – containing about one hundred brilliant blue-white stars. (The first part of the name refers to the constellation in which it lies and the letters OB refer to the spectral type of the stars. O and B are the two hottest stellar classifications and most stars of these types are very brilliant blue-white stars, and relatively young.) The image also shows the cluster’s associated nebula — a star-forming cloud of glowing hydrogen gas (Sh2-54) — as well as dust clouds.

Besides its beauty, NGC 6604 also draws the gaze of astronomers, for its strange column of hot ionized gas emanating from it. Similar columns of hot gas, which channel outflowing material from young star clusters, have been found elsewhere in the Milky Way and other spiral galaxies, but the example in NGC 6604 is relatively nearby, allowing astronomers to study it in detail.

This particular column (often referred to by astronomers as a “chimney”) is perpendicular to the galactic plane and stretches an incredible 650 light-years in length. Astronomers think that the hot stars within NGC 6604 are responsible for producing the chimney, but more research is needed to fully understand these unusual structures.

The bright stars that form NGC 6604 (which are easily seen in a small telescope) and their surroundings are shown in this image taken by the Wide Field Imager attached to the MPG/ESO 2.2-meter telescope at the La Silla Observatory in Chile, using 5 different color filters. Because the cluster is located less than two degrees north of its more prominent neighbor, the Eagle Nebula (Messier 16), the cluster is often overlooked.