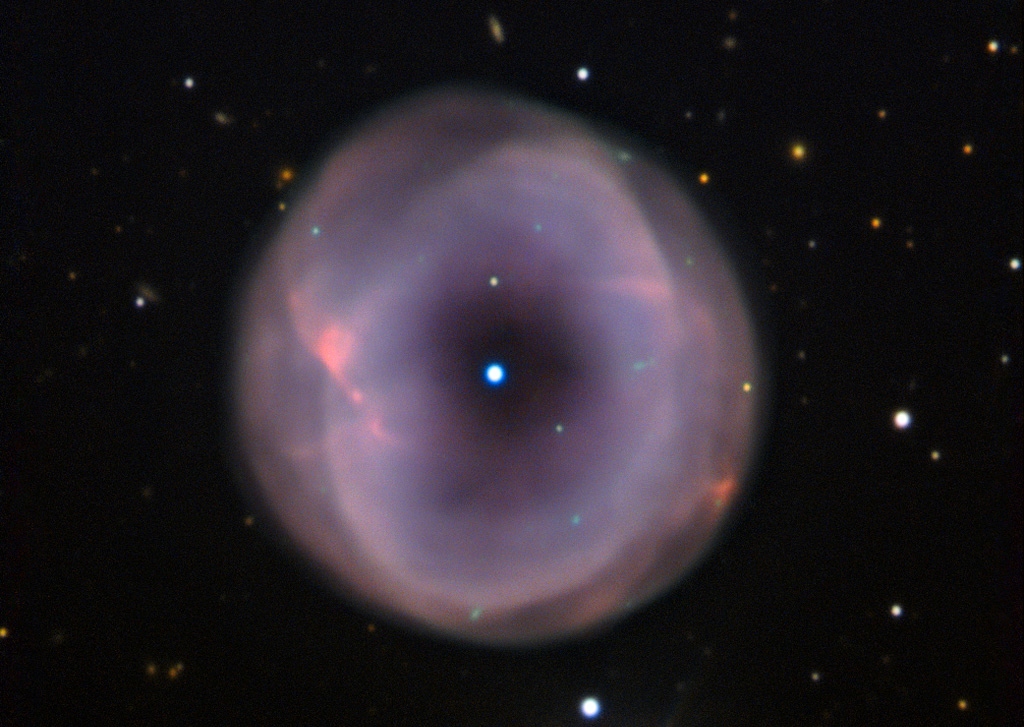 IC 5148 (also known as IC 5150 and nicknamed the Spare Tyre Nebula) is a planetary nebula of a couple of light-years across, located some 3,000 light-years away near the ‘neck’ of the southern constellation Grus (the Crane). It is moving towards us at approximately 26.2 kilometers per second, and is still growing at 53.4 kilometers per second — one of the fastest expanding planetary nebulae known.

Despite their name, planetary nebulae have nothing to do with planets. The name was coined by Sir William Herschel because when he first viewed a planetary nebula through a telescope, he could only identify a hazy smoky sphere, similar to gaseous planets such as Uranus. The name has stuck even though modern telescopes make it obvious that these objects are not planets at all.

This nebula is somewhat faint, and shows up as a ring of material, with the eastern side appearing broader and brighter, and the star shining in the middle of the central hole. This appearance led astronomers to nickname IC 5148 the Spare Tyre Nebula. The central hole is probably due to the radiation pressure pushing the surrounding gas away from the white dwarf core, leaving a ‘vacant’ space.

Planetary nebulae last for only about 10,000 years, a fleeting episode in the 10-billion-year lifespan of Sun-like stars. So, over the next several thousand years, IC 5148 will gradually disperse into space, and then the white dwarf will cool and fade away for billions of years. Our own Sun is expected to undergo a similar fate, but fortunately this will not occur until some 5 billion years from now.

The ESO Faint Object Spectrograph and Camera (EFOSC2) on the New Technology Telescope at La Silla in Chile gives a somewhat more elegant view of IC 5148. Rather than looking like a spare tyre, the nebula resembles ethereal blossom with layered petals.