NGC 1333, a reflection nebula in Perseus 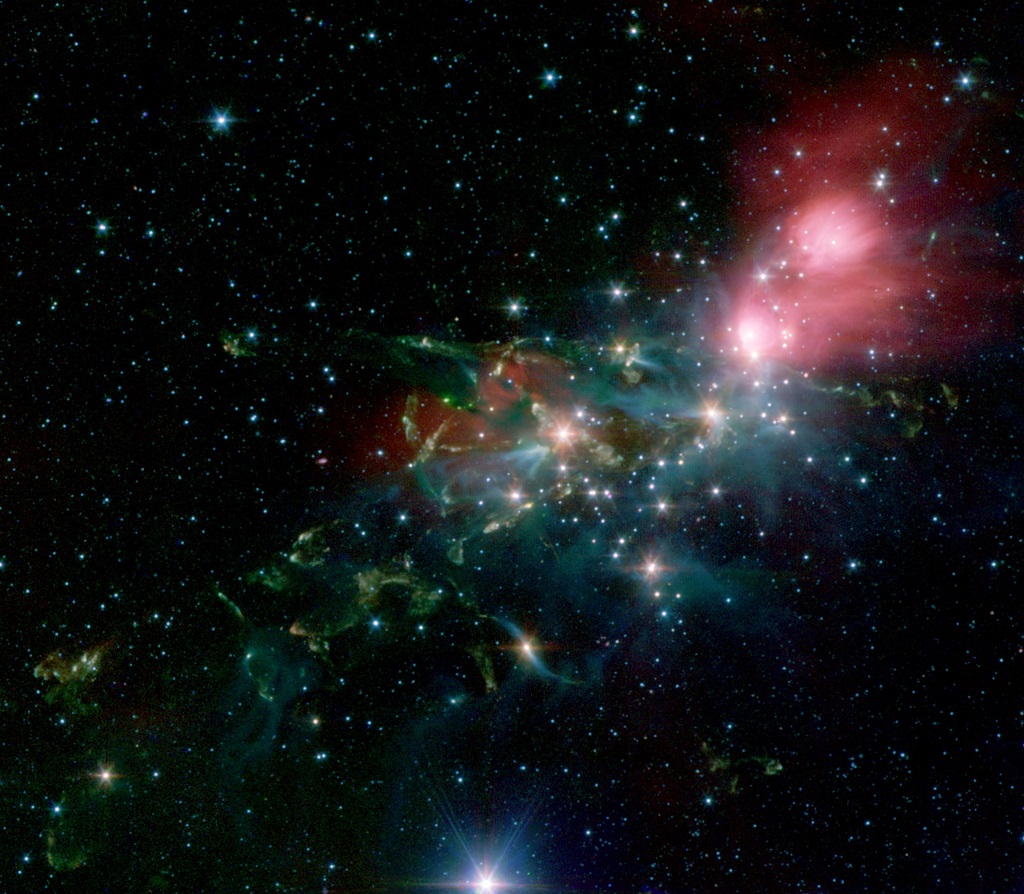 NGC 1333 is a diffuse reflection nebula of about 4 light-years across, that is less than a million years old. It is located only about 1,000 light-years away from Earth in the northern constellation of Perseus, at the edge of the Perseus molecular cloud.

It is one of the nearest star forming regions and particularly rich in young stars. Star clusters are born within molecular clouds and during their early evolution they are often only visible at infrared wavelengths because they are heavily obscured by dust.

The nebula contains hundreds of these young stars (less than a million years old), most still obscured by the dusty clouds which formed them. With the penetrating infrared view of the Spitzer, scientists can detect the light from these objects. This allows a look through the dust to gain a more detailed understanding of how stars like our Sun begin their lives.

The young stars in NGC 1333 don’t form a single cluster, but are split between two sub-groups. One group is to the northern part of the nebula shown as red in the image. The other group is south, where the features shown in yellow and green abound in the densest part of the natal gas cloud.

With the sharp infrared eyes of Spitzer, scientists can detect and characterize the warm and dusty disks of material that surround forming stars. By looking for differences in the disk properties between the two subgroups, they hope to find hints of the star- and planet-formation history of this region.

The greenish streaks and splotches located in the lower portion of the image are glowing shock fronts where jets of material – spewed from extremely young embryonic stars – are plowing into the cold, dense gas nearby. The number of separate jets that appear in this region is unprecedented. This leads scientists to believe that by stirring up the cold gas, the jets may contribute to the eventual dispersal of the gas cloud, preventing more stars from forming in NGC 1333. In contrast, the upper portion of the nebula is dominated by the infrared light from warm dust, shown as red.

Astronomers have discovered 30 to 40 brown dwarfs in NGC 1333 and Rho Ophiuchi Cloud complex together, including one that is just six times the mass of Jupiter. Brown dwarfs are celestial bodies that are larger than planets but too small to trigger the internal nuclear fusion reactions required to become full-fledged stars.

Brown dwarfs seem to be more common in NGC 1333 than in other young star clusters. That difference may be hinting at how different environmental conditions affect their formation. It also suggests that objects not much bigger than Jupiter could form the same way as stars do.

There are also 36 Herbig-Haro obejects identified in NGC 1333 confirming its status as a young active region of star formation. Herbig-Haro objects are small nebulae produced by outflows ejected by newly born stars, and are formed when narrow jets of gas ejected by young stars collide with clouds of gas and dust nearby, at speeds of several hundred kilometres per second. They are usually highly obscured by the clouds of gas and dust from which they formed.

This image is taken with the infrared Spitzer Space Telescope.