Smith’s Cloud, a cloud of hydrogen gas in Aquila 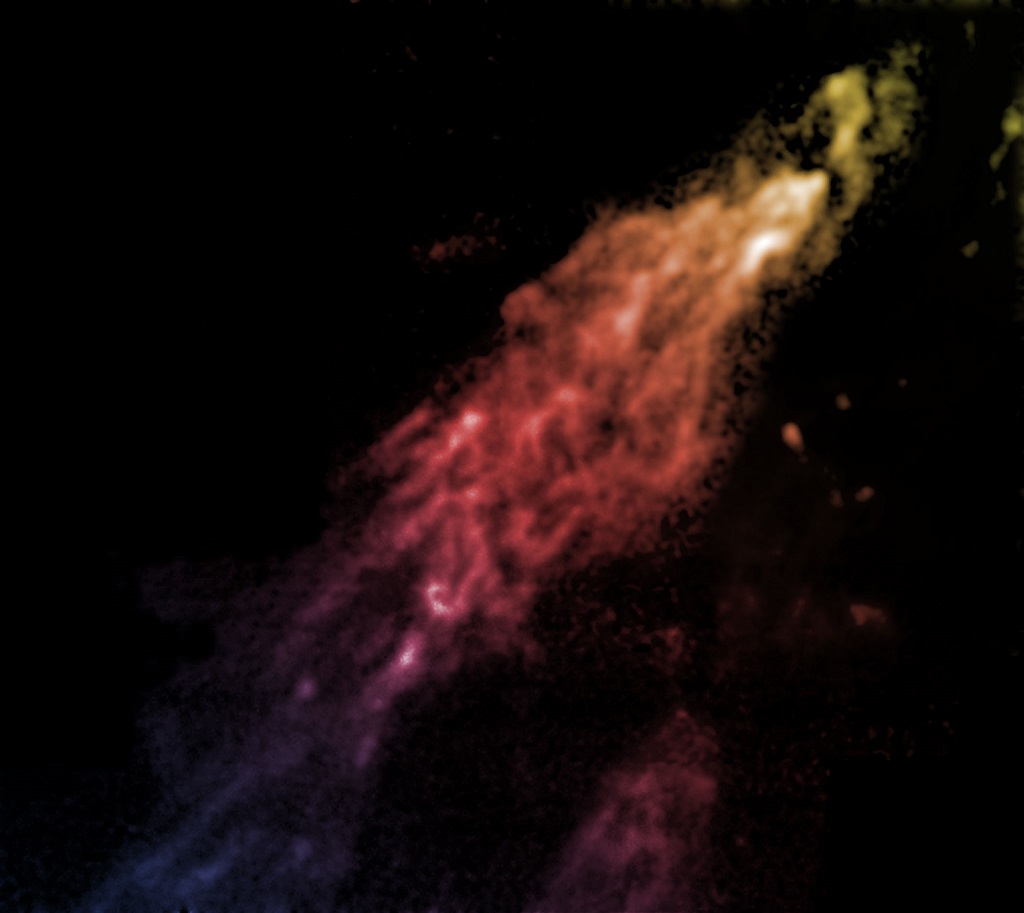 Smith’s Cloud is a huge cloud of hydrogen gas that measures some 9,800 light-years by 3,300 light-years, located between 36,000 and 45,000 light-years away from Earth in the northern constellation of Aquila (the Eagle). It has a mass of at least one million solar masses.

The cloud was discovered in 1963 by Gail Bieger, née Smith (hence the name), who was an astronomy student at Leiden University in the Netherlands.

The high-velocity cloud is most likely a gas cloud left over from the formation of the Milky Way or gas stripped from a neighbor galaxy. It is now moving towards the disk of our Galaxy at 73 ± 26 kilometers per second and is expected to hit the disk of the Milky Way in about 27 million years, at an angle of approximately 45 degrees at a point in the Perseus Arm, one of two major spiral arms of the Milky Way.

The shape of Smith’s Cloud, somewhat similar to that of a comet, indicates that it’s leading edge is already hitting gas in our Galaxy’s outskirts. At the same time, it is feeling a tidal force from the gravity of the Milky Way and may be in the process of being torn apart. Our Galaxy will get a rain of gas from this cloud before its core will smash into the Milky Way’s plane.

The results of the collision will be spectacular. Where it does collide, the cloud will generate shockwaves in the gas already residing in the Milky Way. These shock waves will set off a tremendous burst of star formation in that region of the Galaxy. Many of those stars will be very massive, rushing through their lives quickly and exploding as supernovae. Over a few million years, it’ll look like a celestial New Year’s celebration, with huge firecrackers going off in that region.

Despite its great mass, Smith’s Cloud is spread out over such a wide area that it would probably have no direct effect on existing stars and planets that might be present at the impact site. But the supernovae that go off a few million years later could be hazardous to life in solar systems unfortunate enough to be nearby.

Projecting the cloud’s trajectory backwards through time, it is estimated that it had passed through the disk of the Milky Way some 70 million years ago. A ring of stars and gas about 2,000 light-years across that is slowly expanding in the Sun’s neighborhood may be the signature of this previous impact. To have survived this previous encounter, it is thought to be embedded inside a massive dark matter halo. The fact that it survived this previous encounter means that it is likely to be much more massive than previously thought, and may be a candidate for being a dark galaxy.

This image was taken with the Green Bank Telescope in West Virginia, US.