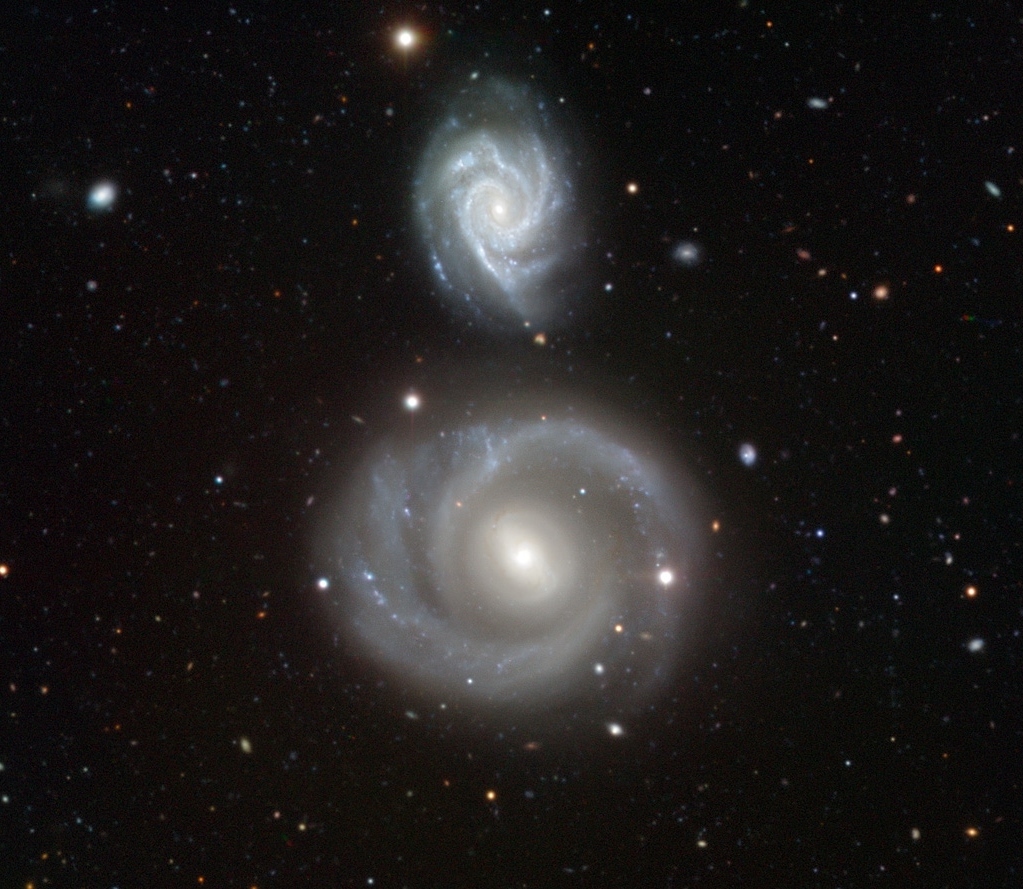 NGC 799 (below) and NGC 800 (top) is a pair of face-on spiral galaxies located some 300 million light-years away from Earth in the constellation of Cetus (the Whale). They are racing away from us with a speed of over 5,900 kilometers per second.

Like our own Milky Way galaxy, these spiral galaxies have characteristic long arms winding towards a bright bulge at the center. In the prominent spiral arms, a large number of hot, young, blue stars are forming in clusters, whereas in the central bulge a large group of cooler, redder, old stars are packed into a compact, almost spherical region.

Though both spiral galaxies, they are quite different from each other. NGC 799 is a barred spiral galaxy of about 130 thousand light-years across, and NGC 800 is an unbarred spiral of some 80 thousand light-years across. Galactic bars are thought to act as a mechanism that channels gas from the spiral arms to the center, intensifying star formation. NGC 799’s bar is extending from its central bulge, and the spiral arms wind out from the ends of the bar.

Another interesting differentiating feature is the number of spiral arms. The smaller NGC 800 has three bright, knotty spiral arms, whilst NGC 799 only has two relatively dim, but broad spiral arms. These start at the end of the bar and wrap nearly completely around the galaxy forming a structure that looks almost like a ring.

On August 11, 2004 a Type Ia supernova was observed in NGC 799, and was given the name SN 2004dt. This was the result from the violent explosion of a white dwarf (a compact star that has ceased fusion in its core).

While it might seem that the two close spiral galaxies are coexisting in peace, nothing can be further than the truth. We don’t know exactly what the future will bring, but typically, when two galaxies are close enough, they interact over hundreds of millions of years by means of gravitational disturbances. In some cases, only minor interactions occur, causing shape distortions, but sometimes galaxies collide, merging to form a single, new and larger galaxy.