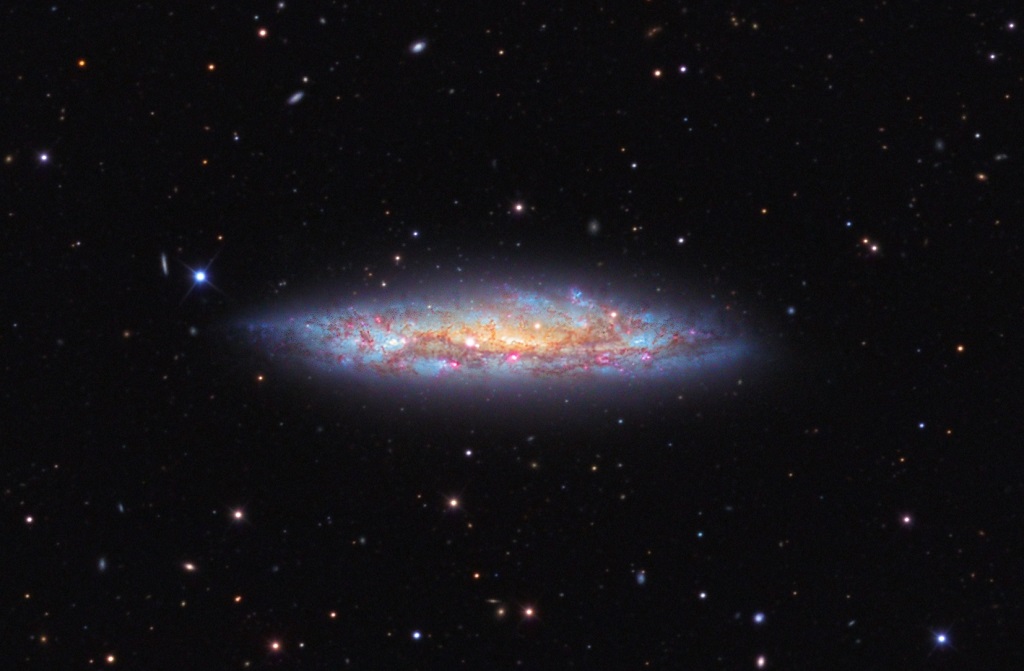 Messier 108 (also known as NGC 3556) is a barred spiral galaxy of some 100,000 light-years across that lies about 45 million light-years away in the northern constellation of Ursa Major (the Great Bear), while it is receding from us at approximately 699 kilometers per second.

It is one of the largest, brightest members of the Ursa Major Cluster of galaxies in the Virgo Supercluster, a supercluster that contains at least 100 galaxy groups and clusters, including the Virgo Cluster and the Local Group, which in turn contains the Milky Way and Andromeda galaxies.

This elongated, nearly edge-on galaxy is very dusty: there are dust structures of substantial thickness in the galaxy’s disk and in front of its bulge. Messier 108 has somewhat loosely wound arms and a quite bright and irregular central region with a large central bar. Several star-forming (HII) regions and young star clusters are exposed against the chaotic background. The galaxy has an estimated mass of 125 billion times the mass of the Sun and includes around 330 globular clusters.

There are 83 X-ray sources identified, including a source located at the nucleus. The brightest of these sources may be an intermediate-mass black hole that is accreting matter. The galaxy’s central supermassive black hole has an estimated mass equal to 24 million times the mass of the Sun, what is six-to-eight times as large as the supermassive black hole in our Galaxy!

Examination of the distribution of neutral hydrogen in Messier 108 shows shells of expanding, neutral hydrogen gas, known as HI supershells, many thousands of light-years long, being pushed out from the center of this galaxy. These may be driven by bursts of star formation activity, resulting in supernovae explosions. Alternatively they may result from an infall of gas from outside the galaxy or by radio jets.

Messier 108 is quite easy for amateur astrophotographers to find; it is situated near the conspicuous star Beta Ursa Majoris, and in one field of view with the Owl Nebula (Messier 97), which is only about 48′ to the SE. But, it is a rather difficult catch for smaller telescopes and requires good, dark sky to see any details. Larger instruments will make out both faint and bright patches in structure.