Messier 58, a spiral galaxy in Virgo 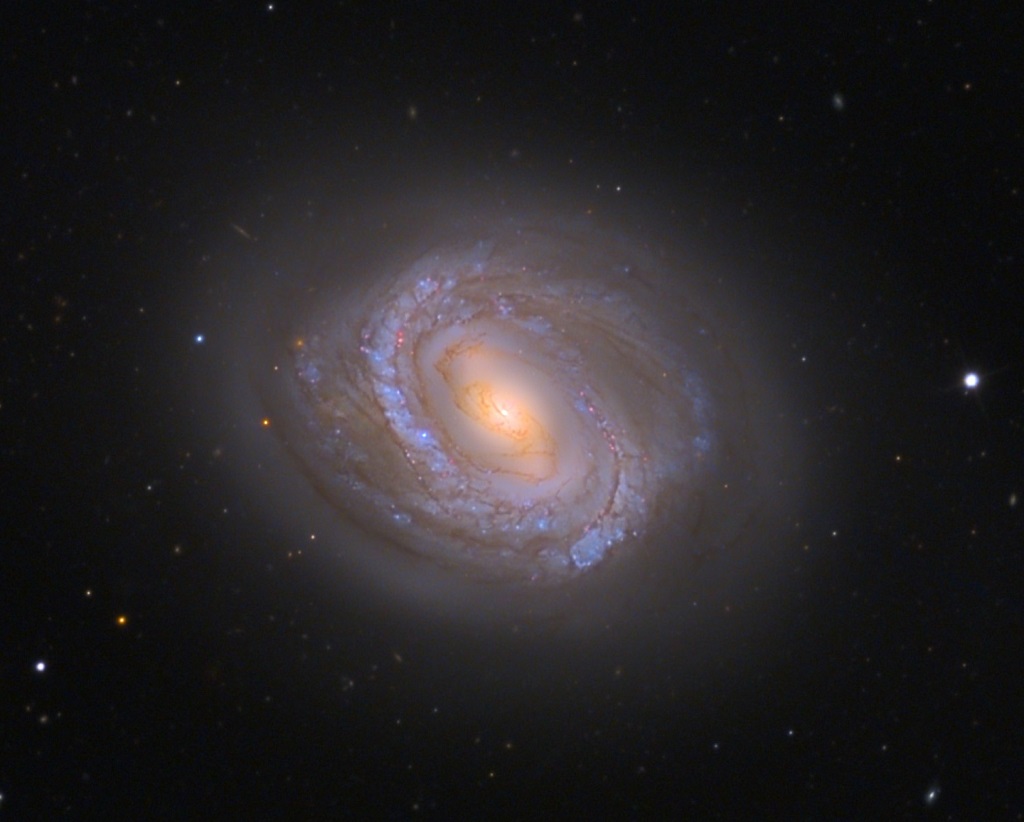 Messier 58 (also known as NGC 4579) is a barred spiral galaxy of some 107,000 light-years across with an estimated mass of 300 billion solar masses, located approximately 68 million light-years away from Earth in the constellation of Virgo (the Virgin), while it is receding from us at about 1,517 kilometers per second. It is one of the brightest galaxies in the Virgo Cluster, a cluster of almost 2,000 galaxies.

Messier 58 has a low contrast between its spiral arms and its disk. Compared with other barred spiral galaxies, this galaxy is low in star formation activity, which is concentrated within the galaxy’s optical disk. It also consist relatively little neutral hydrogen, which is concentrated in clumps and also located inside its disk. This deficiency of gas is believed to be caused by interactions with Virgo’s intracluster medium.

It is classified as a Seyfert galaxy, galaxies with extremely bright nuclei that produce spectral line emission from highly ionized gas. The centers of Seyfert galaxies have active galactic nuclei (AGN), and usually contain supermassive black holes with masses between 10 and 100 million solar masses.

Indeed, in the center of Messier 58 lies a low-luminosity AGN, where a starburst might have taken place. The AGN is also home to a supermassive black hole with a mass of around 70 million solar masses.

Messier 58 is also one of the very few galaxies known to possess a UCNR (Ultra-Compact Nuclear Ring), a series of star-forming regions located in a very small ring around the center of the galaxy. The bright blue structures in the spiral arms are areas where gas and dust are thought to be forming new stars, while the orange light in its core comes from mature stars.

A supernova is a phenomenon in which a star explodes in the final phase of its life. There are two types: Type I and Type II. The Type I does not show hydrogen in the spectra. The Type I category is sub-divided into Type Ia, Type Ib and Type Ic supernovae. Among these, Type Ia are explosions of white dwarf stars. The other group, Type II, are explosions of massive stars (initially more than 8 times the mass of the Sun). The Type II supernovae do show hydrogen in their spectra.

This image was taken in January 2012 with a SBIG STX16803 CCD Camera on the 32-inch Schulman Telescope (RCOS) at the Mount Lemmon SkyCenter.