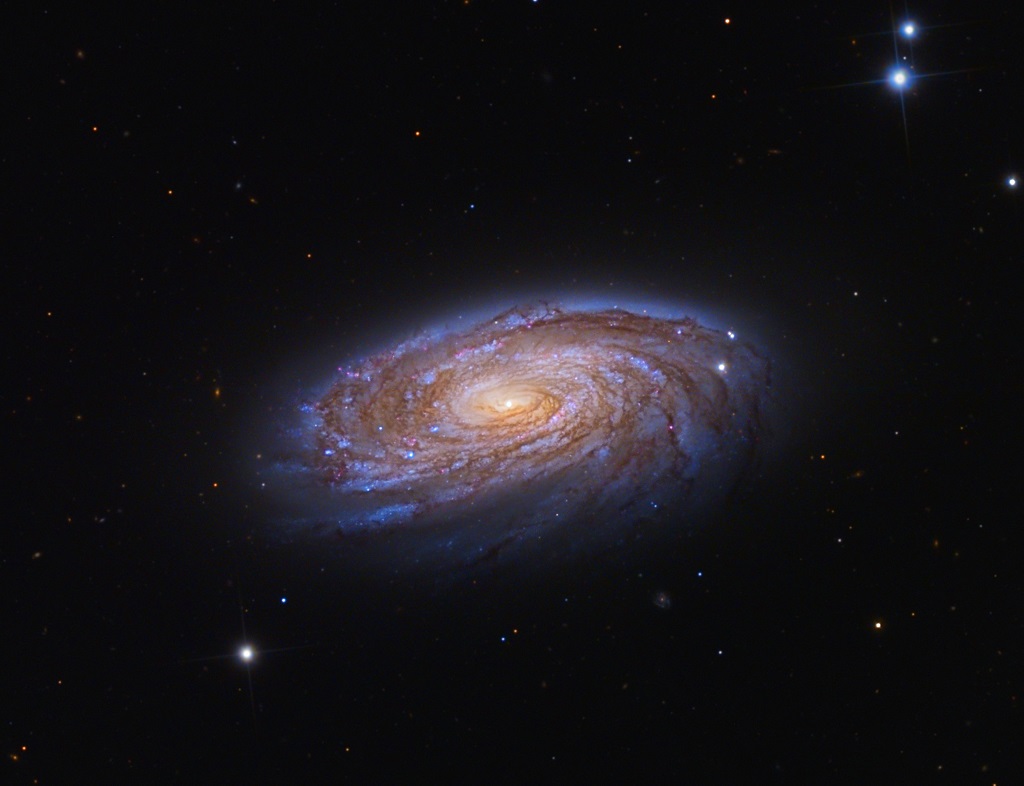 Messier 88 (also known as NGC 4501) is a spiral galaxy of about 130,000 light-years across, located almost 60 million light-years away from Earth in the constellation of Coma Berenices (Berenice’s Hair), while it is speeding away from us at approximately 2281 kilometers per second. Its estimated mass is 250 billion solar masses.

It is one of the brightest galaxies in the Virgo Cluster of galaxies, and may be on a highly elliptical orbit that is carrying the galaxy toward the cluster center. It is currently 0.3–0.48 million parsecs from the center and will come closest to the core in about 200–300 million years. The motion of Messier 88 through the intergalactic medium of the Virgo cluster is creating ram pressure that is stripping away the outer region of neutral hydrogen. This stripping has already been detected along the western, leading edge of the galaxy.

Messier 88 is inclined by about 30 degrees to our line of sight, and it’s shape is an elongated ellipse which is nicely symmetrical. Its multiple spiral arms are laced with young blue star clusters, pink star-forming regions, and obscuring dark dust lanes extending from a yellowish core dominated by an older population of stars. The supermassive black hole at the core of this galaxy has 107.9 solar masses, or about 80 million times the mass of the Sun.

A Type Ia supernova is a result from the violent explosion of a white dwarf star (a compact star that has ceased fusion in its core). The explosion makes the star suddenly as bright as a whole galaxy, before gradually fading from view. Supernova explosions are enriching the intergalactic gas with heavy chemical elements like oxygen, iron and silicon, necessary to build new generations of stars and planets, and to create life.

This image was taken on April 28th and 29th, 2009 with a SBIG STL11000 CCD Camera on the 24-inch RC Optical Systems Telescope at the Mount Lemmon SkyCenter, using Custom Scientific filters.