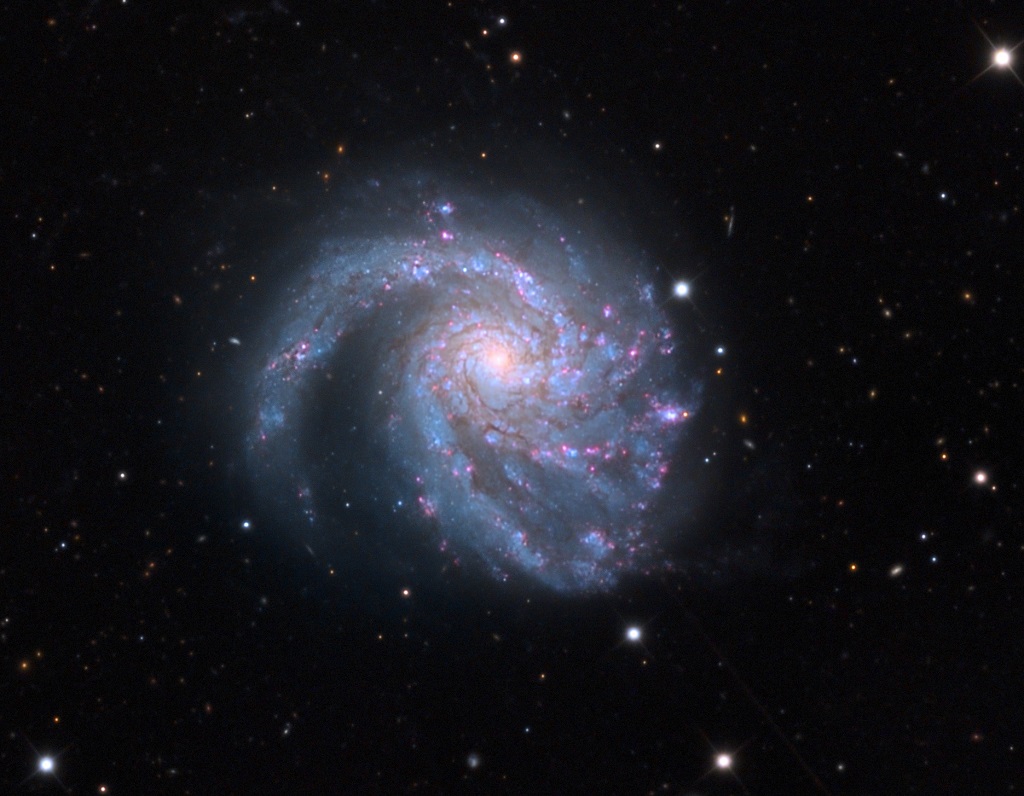 Messier 99 (also known as NGC 4254) is an unbarred spiral galaxy located approximately 50 million light-years away from Earth in the southern part of the constellation Coma Berenices (Berenice’s Hair). It is speeding away from us at about 2,407 kilometers per second, the highest recession velocity measured for a Messier object. Although situated in constellation Coma Berenices, it is one of the brighter spiral members of the Virgo Cluster, the closest cluster of galaxies to us with about 1,500 galaxies.

It was the second galaxy, to be recognized as a spiral (by Lord Rosse in spring 1846) about one year after his first discovery of a spiral, the Whirlpool Galaxy (Messier 51), in spring 1845.

Messier 99 is a relatively bright and large “grand design” spiral, with long, large and clearly defined spiral arms, even though it has one extended arm that is less tightly wound. Its nucleus is shifted to the upper end of this image, what adds to the unusual asymmetry.

This asymmetry, and the high recession velocity of 2407 km/s (compared to the average velocity of about 1200 km/s of the Virgo Cluster) might be due to a close encounter or encounters of Messier 99 with other members of the Virgo Cluster in the past. One possible candidate for such an encounter is the nearby intermediate spiral galaxy Messier 98, which has about the same peculiar velocity but, by chance, toward us. Another candidate is the lenticular galaxy NGC 4262 with this event having taken place some 280 million years ago.

There are even more theories about the asymmetry of Messier 99. Some astronomers also consider Messier 99 is entering in the Virgo Cluster for the first time and, after the mentioned interaction, its suffering ram-pressure stripping as it moves through Virgo’s intracluster medium.

Then there is a bridge of neutral hydrogen gas that links Messier 99 with VIRGOHI21, an extended region of neutral hydrogen (HI) in the Virgo Cluster. Analysis of the internal motion of VIRGOHI21 indicates that it may contain a large amount of dark matter, as much as a small galaxy. Since VIRGOHI21 apparently contains no stars, this would make it one of the first detected dark galaxies. Skeptics of this interpretation argue that VIRGOHI21 is simply a tidal tail of Messier 99.

The gravity from the possible dark galaxy VIRGOHI21 may have distorted Messier 99 and drawn out the gas bridge, as the two galaxy-sized objects have a close encounter, before they go their separate ways (however the existence of that galaxy is unclear). It is expected that the drawn out arm will relax to match the normal arm once the encounter is over. Three supernovae have been observed in this galaxy.

While not classified as a starburst galaxy, Messier 99 has a star formation activity three times larger than other galaxies of similar type that may have been triggered too by that encounter.

This image was created by images taken in January 2012 with a SBIG STX16803 CCD Camera on the 32-inch Schulman Telescope (RCOS) at the Mount Lemmon SkyCenter, using an Astrodon Gen II filter.