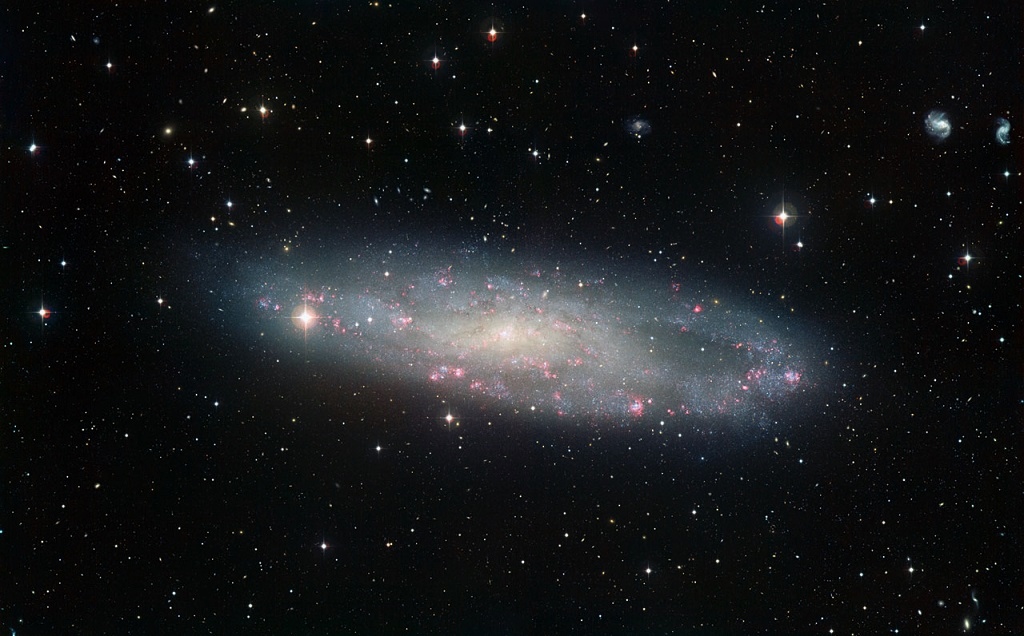 NGC 247 (nicknamed the Needle’s Eye Galaxy) is an elongated intermediate spiral galaxy (although it’s sometimes classified as a dwarf spiral galaxy) of some 70 thousand light-years across, located about 11.1 million light-years away in the constellation of Cetus (the Whale), while it is receding from us at approximately 156 kilometers per second.

The distance of NGC 247 was confirmed in late February 2011. Previously it was thought that the galaxy was more than 1 million light-years further away, but that was proved to be wrong.

This nearly edge-on galaxy has a dusty disk and loose and ragged spiral arms, which show large numbers of stars and glowing pink clouds of hydrogen, marking regions of active star formation. NGC 247 has a prominent (foreground) star on its southern edge and a “void” on its northern side (seen to the right of this image) which is a region that contains a paucity of stars and new star formation. This void resembles the eye of a needle, giving the galaxy its nickname.

Apart from the main galaxy itself, this image also reveals numerous galaxies shining far beyond NGC 247. In the upper right of the picture three prominent spirals form a line and still further out, far behind them, many more galaxies can be seen, some shining right through the disk of NGC 247.

This colour image of NGC 247 and its rich backdrop was created from a large number of monochrome exposures taken through blue, yellow/green and red filters taken over many years by the Wide Field Imager on the MPG/ESO 2.2-metre telescope at ESO’s La Silla Observatory in Chile. In addition exposures through a filter that isolates the glow from hydrogen gas have also been included and coloured red. The total exposure times per filter were 20 hours, 19 hours, 25 minutes and 35 minutes, respectively.