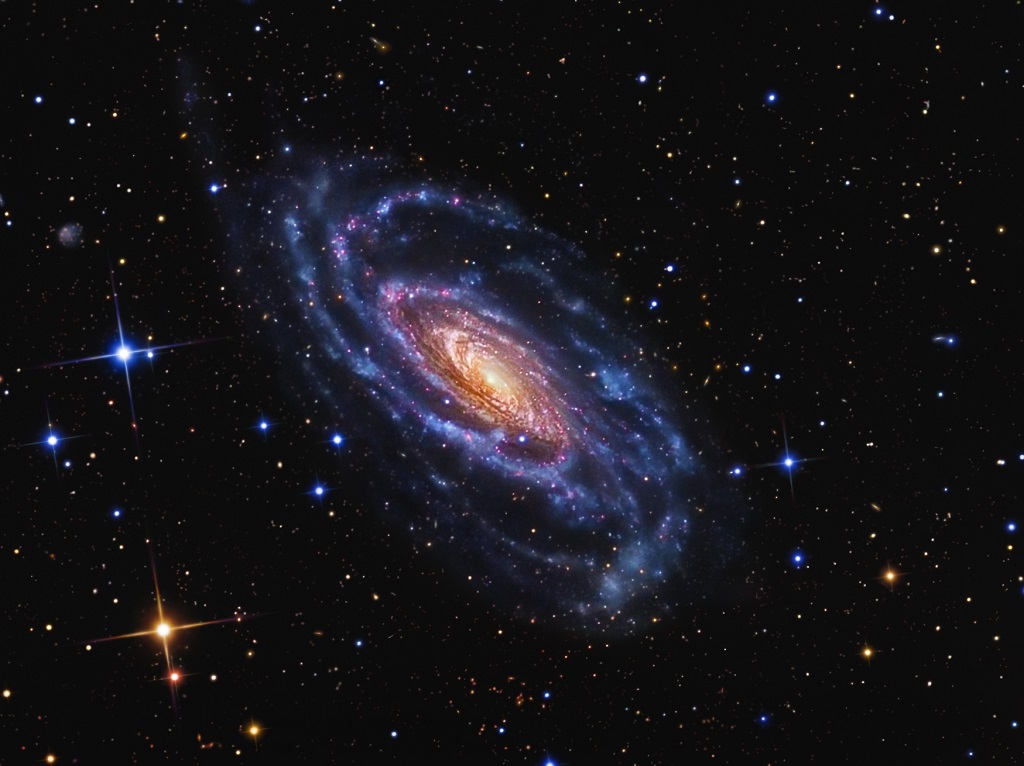 NGC 5033 is an unbarred spiral galaxy of more than 100,000 light-years across (about the same size as our own Milky Way), located some 43 million light-years away from Earth in the northern constellation of Canes Venatici (the Hunting Dogs). It is receding from us at approximately 875 kilometers per second.

The galaxy has a very bright nucleus and very pronounced but relatively faint spiral arms, in which we can see many massive, bright blue star clusters and pinkish star-forming regions. The image also reveals striking details of dust lanes winding near the galaxy’s bright core and spiral arms. Another striking feature is the significant warping in the southern half of the disk of this galaxy, what is probably the result of an ancient interaction with another galaxy.

NGC 5033 is a well-studied example of a Seyfert galaxy, a type of galaxy with an extremely bright nucleus that produces spectral line emission from highly ionized gas. The centers of Seyfert galaxies have active galactic nuclei (AGN), and usually contain supermassive black holes with masses between 10 and 100 million solar masses

The nucleus of NGC 5033 is also thought to contain a supermassive black hole. The bright emission seen in visible light (as well as other wavebands) is likely partially produced by the hot gas in the environment around this black hole. NGC 5033 has a core that is not only very bright, but also variable, and the bright nucleus and rotational center of the galaxy also seem to be slightly offset, suggesting NGC 5033 is the result of an ancient galaxy merger.

NGC 5033 and the nearby, also large spiral galaxy NGC 5005 comprise a physical galaxy pair. Both weakly influence each other gravitationally, but they are not yet close enough to each other to be distorted by the tidal forces of the gravitational interaction.

There exist several categories of Type II supernova explosions. A Type IIb supernova has a weak hydrogen line in its initial spectrum. However, later on the hydrogen emission becomes undetectable, and there is also a second peak in the light curve that has a spectrum which more closely resembles a Type Ib supernova. The progenitor could have been a giant star which lost most of its hydrogen envelope due to interactions with a companion in a binary system, leaving behind the core that consisted almost entirely of helium.

The galaxy’s relatively large size and relatively high surface brightness make it an object that can be viewed and imaged by amateur astronomers.