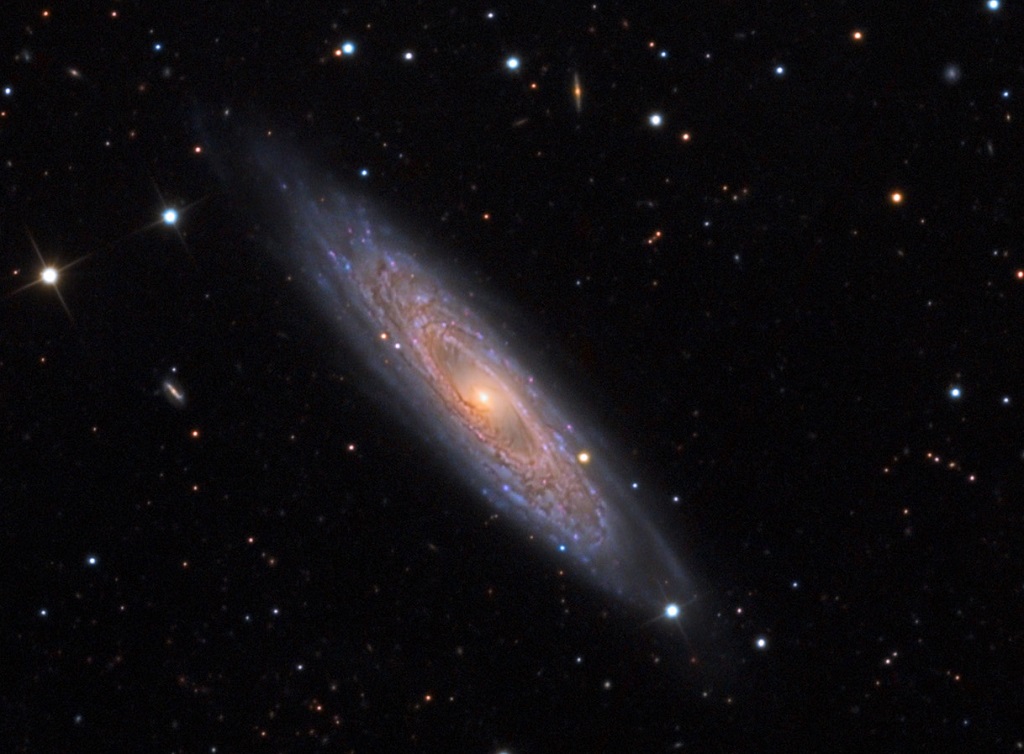 NGC 7184 is a barred spiral galaxy located some 114 million light-years away from Earth in the constellation of Aquarius (the Water-Bearer), while it is receding from us at approximately 2620 kilometers per second. It is the brightest member of the NGC 7184 Group, a group of 4 galaxies which also includes the smaller galaxies NGC 7180, NGC 7185 and NGC 7188.

NGC 7184 has a bright core, pinkish star forming regions, bright blue star clusters and dark dust lanes along its spiral arms. One of the arms folds back in an almost perfectly circular ring of stars around the core of the galaxy. Because there aren’t any visible tidal tails or plumes of stars, NGC 7184 is probably not interacting with its nearby companion galaxies.

On July 20, 1984 a Type I supernova, called  SN 1984N, was discovered in this galaxy. At the time of the discovery its maximum brightness was magnitude 14.

A supernova occurs when a star explodes in the final phase of its life. The exploding star can become billions of times as bright as the Sun before gradually fading from view. At its maximum brightness, the exploded star may outshine an entire galaxy. There are two types: Type I and Type II. The Type I does not show hydrogen in the spectra, while the Type II supernovae do show hydrogen in their spectra.

This image was created by observations taken in October and November 2011 with an SBIG STX16803 CCD Camera on the 32-inch Schulman Telescope (RCOS) at the Mount Lemmon SkyCenter through Astrodon Gen II filters.