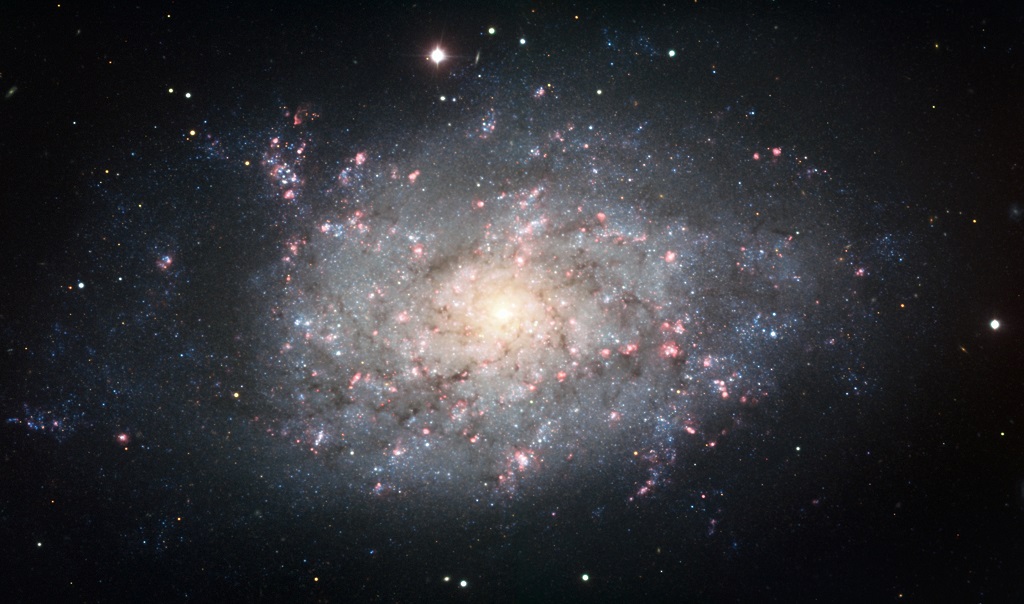 NGC 7793 (sometimes called Bond’s Galaxy) is an unbarred spiral galaxy of some 34,000 light-years across, located about 12.7 million light-years away from Earth in the small southern constellation Sculptor. It is receding form us at roughly 230 kilometers per second.

It is one of the brightest galaxies within the Sculptor Group, an elongated, loosely bound group of 13 galaxies in the constellation of the same name, and the nearest group of galaxies to the Local Group of which our Milky Way is a member. The Sculptor Galaxy (NGC 253) and its companion galaxies forming a tightly-bound core of galaxies near the center.

NGC 7793 has a chaotic spiral structure, unlike the class of grand-design spiral galaxies to which our Milky Way belongs, and a very tiny bulge. It is difficult to identify any particular spiral arm in these chaotic structures, although it is possible to guess at a general rotating pattern. The pink specks are regions were new star formation is taking place, and the many bright blue dots are young star clusters.

In the outskirts of NGC 7793 lies a powerful microquasar, which is a system containing a stellar-mass black hole being fed by a companion star. Gas swirling toward the black hole forms a disk around the black hole. Twisted magnetic fields in the disk generate strong electromagnetic forces that propel some of the gas away from the disk at high speeds in two jets, creating a huge bubble of hot gas about 1,000 light-years across.

These jets are the most powerful ever seen from a stellar-mass black hole and a surprising amount of energy from the black hole is being carried away by the jets, rather than by radiation from material being pulled inward. The power of the jets is estimated to be about ten times larger than that of the very powerful ones seen from the famous microquasar in our own galaxy, SS433.

A Type II supernova results from the rapid collapse and violent explosion of a massive star, mainly observed in the spiral arms of galaxies and in H II regions, but not in elliptical galaxies. A star must have at least 8 times, and no more than 40–50 times the mass of the Sun for this type of explosion. It is distinguished from other types of supernova by the presence of hydrogen in its spectrum.

This image is taken with the FORS instrument attached to ESO’s Very Large Telescope at Paranal, based on data obtained through B, V, I and H-alpha filters.