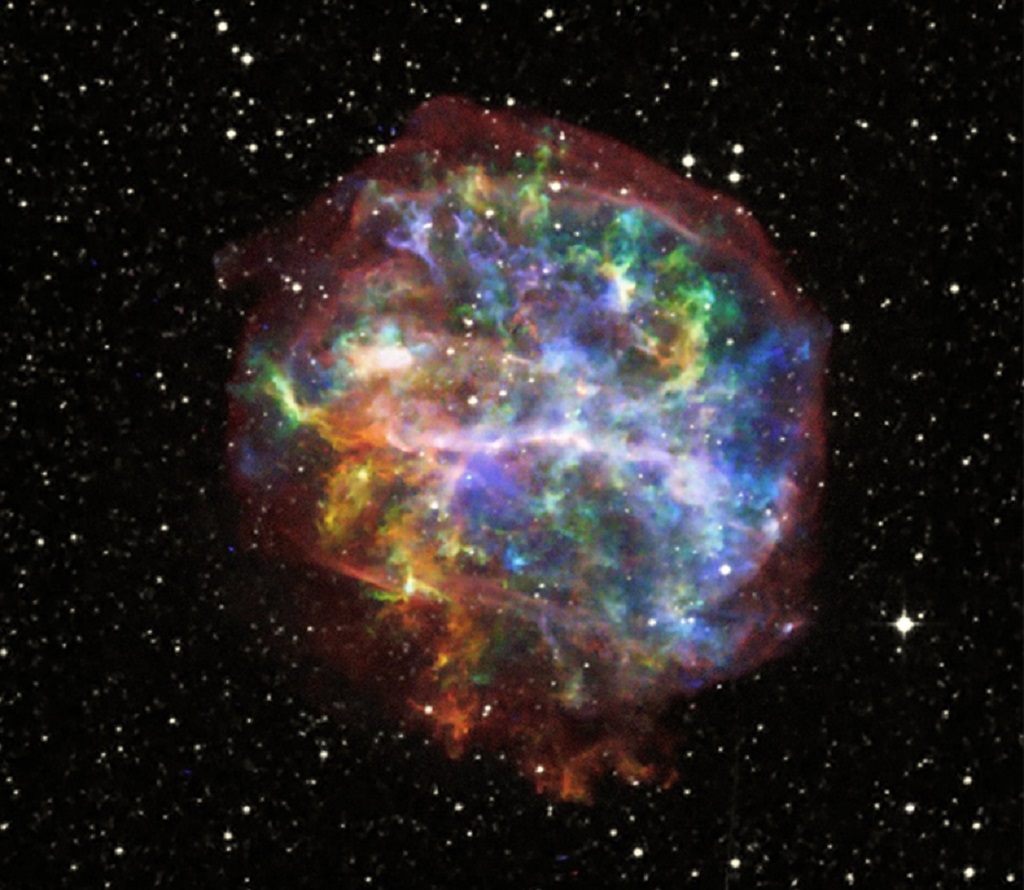 G292.0+1.8 (SNR G292.0+1.8) is the rapidly expanding remnant of a supernova that exploded about 1,600 years ago. It is located within our Milky Way, at a distance of approximately 20,000 light-years away from the Earth in the southern constellation of Centaurus (the Centaur). At the moment, it is some 36 light-years across.

The explosion was triggered by the collapse of the core of a massive star, releasing tremendous amounts of energy in the process, in which a pulsar (a rapidly rotating neutron star) was left behind at the center, designated as PSR J1124–5916. The pulsar is surrounded by outflowing stellar matter; a rapidly expanding shell of gas that contains large amounts of elements such as oxygen [(especially double-ionized oxygen (OIII)], neon, magnesium, silicon and sulfur.

G292.0+1.8 is one of three known oxygen-rich supernovae in our Galaxy. These supernovae are of great interest to astronomers because they are one of the primary sources of the heavy elements necessary to form planets and people.

Although considered a “textbook” case of a supernova remnant, the intricate structure shown here reveals a few surprises.

Near the center of G292.0+1.8 is the so-called pulsar wind nebula, most easily seen in high energy X-rays. This is the magnetized bubble of high-energy particles that surrounds the pulsar. The narrow, jet-like feature running from north to south in the image is likely parallel to the spin axis of the pulsar.

The pulsar is located slightly below and to the left of the center of G292.0+1.8. Assuming that the pulsar was born at the center of the remnant, it is thought that recoil from the lopsided explosion may have kicked the pulsar in this direction. However, the kick direction and the pulsar spin direction do not appear to be aligned, in contrast to apparent spin-kick alignments seen in some other supernova remnants.

Another key feature of this remnant is the long white line running from left to right across the center called the equatorial belt. This structure is thought to be created when the star – before it died – expelled material from around its equator via winds. The orientation of the equatorial belt suggests the parent star maintained the same spin axis both before and after it exploded.

This composite image is obtained in 142 hours during 6 observations from Sept 13 – Oct 20, 2006, in color by the Chandra X-ray Observatory; and in white by optical data from the Digitized Sky Survey. In this image, blue represents silicon and sulfur; green represents magnesium, while yellow and orange represent oxygen.