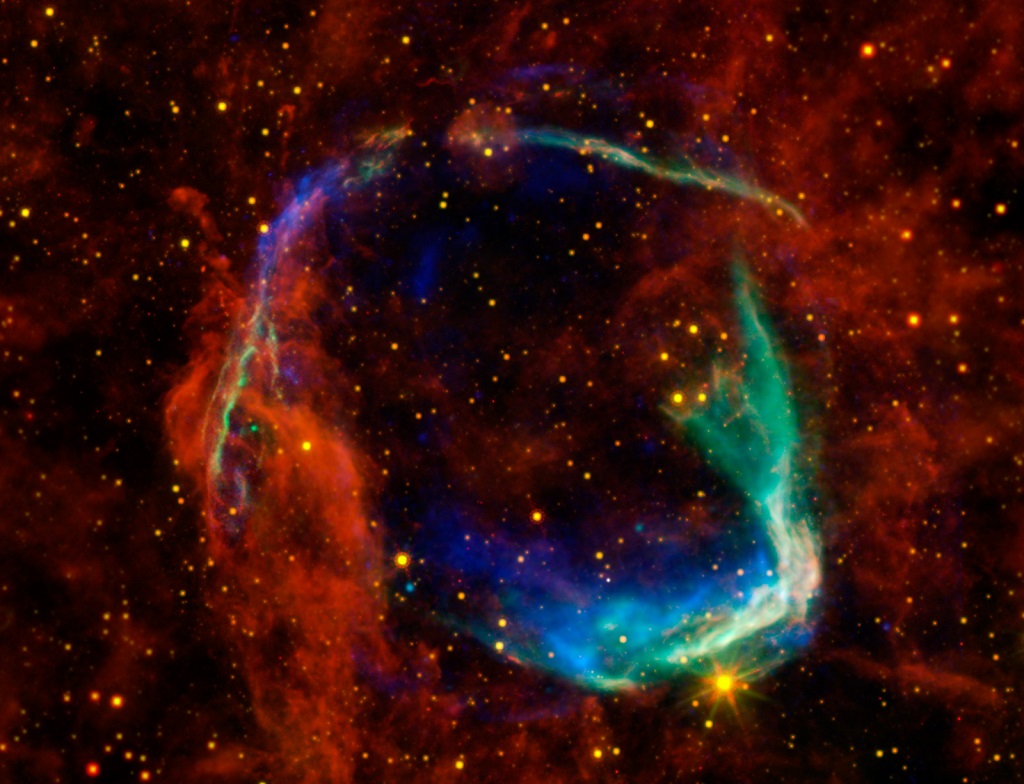 RCW 86 (also known as SN 185) is a supernova remnant of some 85 light-years across, located about 9,100 light-years away from Earth between the southern constellations of Circinus (the Compass) and Centaurus (the Centaur), near the direction of Alpha Centauri.

It is most likely the historical supernova remnant of SN 185, which appeared on December 7, 185 A.D. This supernova was observed by Chinese astronomers and may also have been recorded in Roman literature. It remained visible in the night sky for eight months and reached a brightness comparable to Mars. This is believed to have been the first supernova recorded by humankind.

Optical, radio, and X-ray emission observed at a location consistent with the Chinese record make the gaseous shell RCW 86 the prime candidate for the remnant of SN 185. Recent X-ray studies showed a good match for the expected age.

These observations also revealed that the event was a Type Ia supernova (a type with consistent peak luminosity), created by the relatively peaceful death of a star like our Sun, which then shrank into a dense white dwarf (a compact star that has ceased fusion in its core). The white dwarf then increases its mass by gobbling up matter, or fuel, from a companion star. A runaway nuclear explosion (the supernova) then makes the star suddenly as bright as a whole galaxy, before gradually fading from view.

Infrared observations solved another mystery — how RCW 86 got to be so large in such a short amount of time. For the first time it was shown that a white dwarf can blow a wind prior to exploding in a Type Ia supernova, which creates a huge “cavity” (a region of very low-density) around it. The explosion into this cavity was able to expand much farther and faster than it otherwise would have. So, a picture of a Type Ia explosion within a wind-blown bubble emerged.

This image combines data from four different space telescopes to create a multi-wavelength view of RCW 86.

X-ray images from ESA’s XMM-Newton Observatory and NASA’s Chandra X-ray Observatory are combined to form the blue and green colors in the image. The X-rays show the interstellar gas that has been heated to millions of degrees by the passage of the shock wave from the supernova.

Infrared data from NASA’s Spitzer Space Telescope, as well as NASA’s Wide-Field Infrared Survey Explorer (WISE) are shown in yellow and red, and reveal dust radiating at a temperature of several hundred degrees below zero, warm by comparison to normal dust in our Milky Way galaxy.