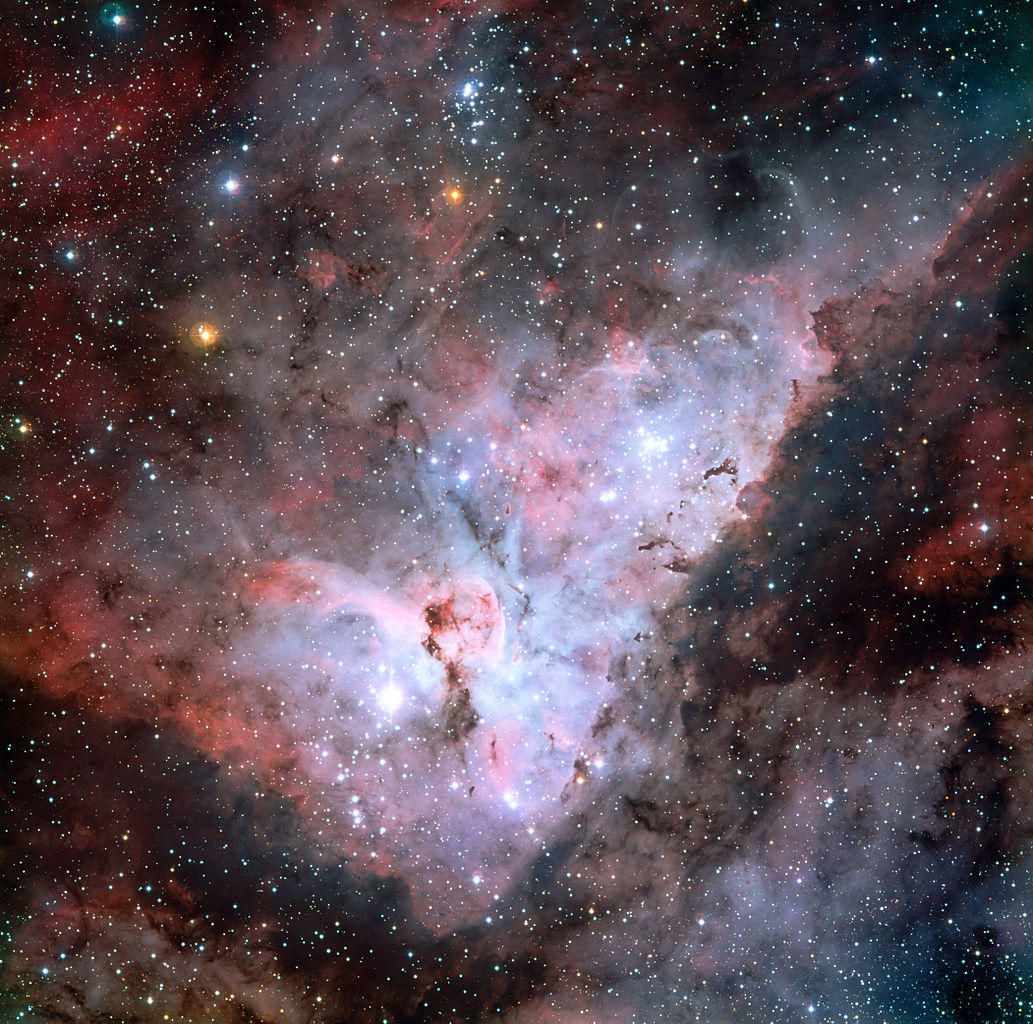 The Carina Nebula (also known as NGC 3372, the Great Nebula in Carina and the Eta Carinae Nebula) is a large, bright emission nebula of about 260 light-years across, located roughly 7,500 light-years away from Earth in the Carina–Sagittarius Arm of our Milky Way Galaxy, in the southern constellation of Carina (the Keel).

This star-forming cloud of glowing gas and dust, with a total mass of 900,000 Suns, is the brightest nebula in the sky and contains eight open star clusters, such as Collinder 228, Trumpler 14 (the youngest and most crowded cluster in this nebula) and Trumpler 16. It hosts some of the brightest and most massive stars known in the entire Milky Way, including Eta Carinae (the brightest star in this image, situated in Trumpler 16) and HD 93129A (in Trumpler 14). The energy produced by these stars is sculpting the nearby gas and setting off the formation of a new generation of stars.

Eta Carinae is a very bright supergiant star of only 2 to 3 million years old, surrounded by an expanding bipolar cloud of dust and gas known as the Homunculus Nebula (little man in Latin).

Estimates of Eta Carinae’s mass range from 100 to 150 times the mass of our Sun, and its luminosity is about four million times that of the Sun. It pumps out as much energy in 6 seconds as our Sun does in an entire year while its stellar wind blows off the equivalent mass of Jupiter each year, exceeding our Suns yearly rate of mass loss a 100 billion fold.

Eta Carinae probably coexists in a binary state with another massive supergiant of some 30 to 60 solar masses. At their closest approach every 5.5 years the two supergiants approach within 2 to 3 astronomical units of each other allowing their powerful stellar winds to collide, with a subsequent enormous outflow of light and radiation.

The Homunculus Nebula was expelled from the star during such an outburst in 1843 (known as the Great Eruption or Nova Carinae 1843) which briefly made Eta Carinae the second-brightest star in the sky. The explosion produced two lobes and a large, thin equatorial disk, all moving outward at about 1 million kilometers per hour. Eta Carinae’s effects on the nebula can be seen directly. The dark globules in the image and some other less visible objects have tails pointing directly away from the massive star.

Because of its extraordinary mass, Eta Carinae is about to explode in a supernova or hypernova. But no one knows when – it may be next year, it may be one million years from now. However, an energy outburst of this order could possibly devastate starfields and planets within a few thousand light-years radius.

The Carina Nebula is also home to a dark cloud of cold molecules and dust known as the Keyhole Nebula (designated NGC 3324). This nebula with a diameter of approximately 7 light-years contains bright filaments of hot, fluorescing gas, silhouetted against the much brighter background of the Carina Nebula.

For its 20th anniversary the Hubble Space Telescope has taken an image of the “Mystic Mountain”, a pillar of dust and gas of about three light-years in height within the Carina Nebula; nascent stars inside the pillar fire off gas jets, that stream from towering peaks.

This wide field color-composite image was taken with the MPG/ESO 2.2-metre telescope at La Silla, Chile, using ultraviolet and optical filters. Several astronomical objects can be seen: to the bottom left of the image Eta Carinae, with the Keyhole Nebula just adjacent to the star. The collection of very bright, young stars above and to the right of Eta Carinae is the open star cluster Trumpler 14. A second open star cluster, Collinder 228 is also seen in the image, just below Eta Carinae.