The Flaming Skull Nebula, a planetary nebula in Serpens Cauda 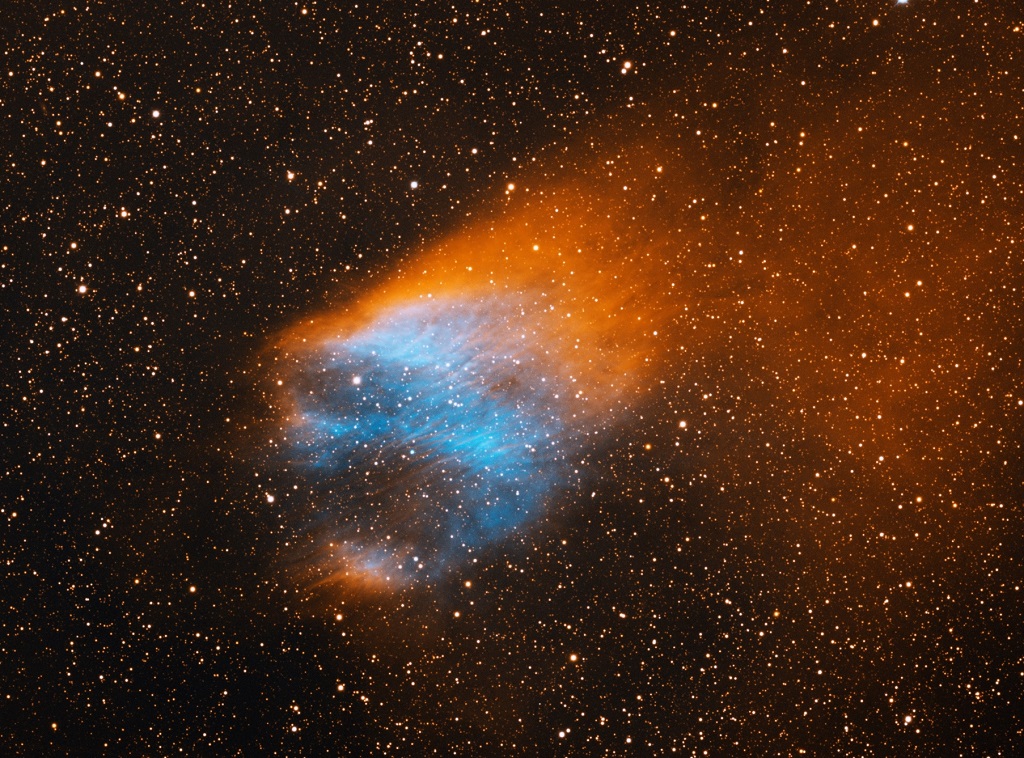 The Flaming Skull Nebula – of which the distance is still undetermined – is a very ancient planetary nebula that is estimated to be at least 45,000 years old. Its progenitor star is a white dwarf that is displaced from the center of the nebula.

The nebula’s very irregular shape is due to its interaction with the surrounding interstellar medium. The white dwarf is moving rapidly through space and happens to be in a location in our Milky Way galaxy where there is more gas and dust between stars than usual. So as it moves, the gas it blows off is itself blown back, making it look like a giant screaming head with flaming hair, streaking across the Galaxy. The interaction with the interstellar medium also impedes and finally stops the expansion of the nebula.

The diffuse orange emission to the upper right is the result of the planetary nebula’s motion through the disk of our Galaxy. The bluish interior is from energized oxygen atoms. The progenitor star is the very blue star at the center of the bluish gas.

Over the next several thousand years, the Flaming Skull Nebula will gradually disperse into space, and then the white dwarf will cool and fade away for billions of years. Our own Sun is expected to undergo a similar fate, but fortunately this will not occur until some 5 billion years from now.

This image was obtained with the wide-field view of the Mosaic camera on the Mayall 4-meter telescope at Kitt Peak National Observatory in Arizona, using Hydrogen alpha (red) and Oxygen [OIII] (blue) filters. In this image, North is right, East is up.