The Jellyfish Nebula, a supernova remnant in Gemini 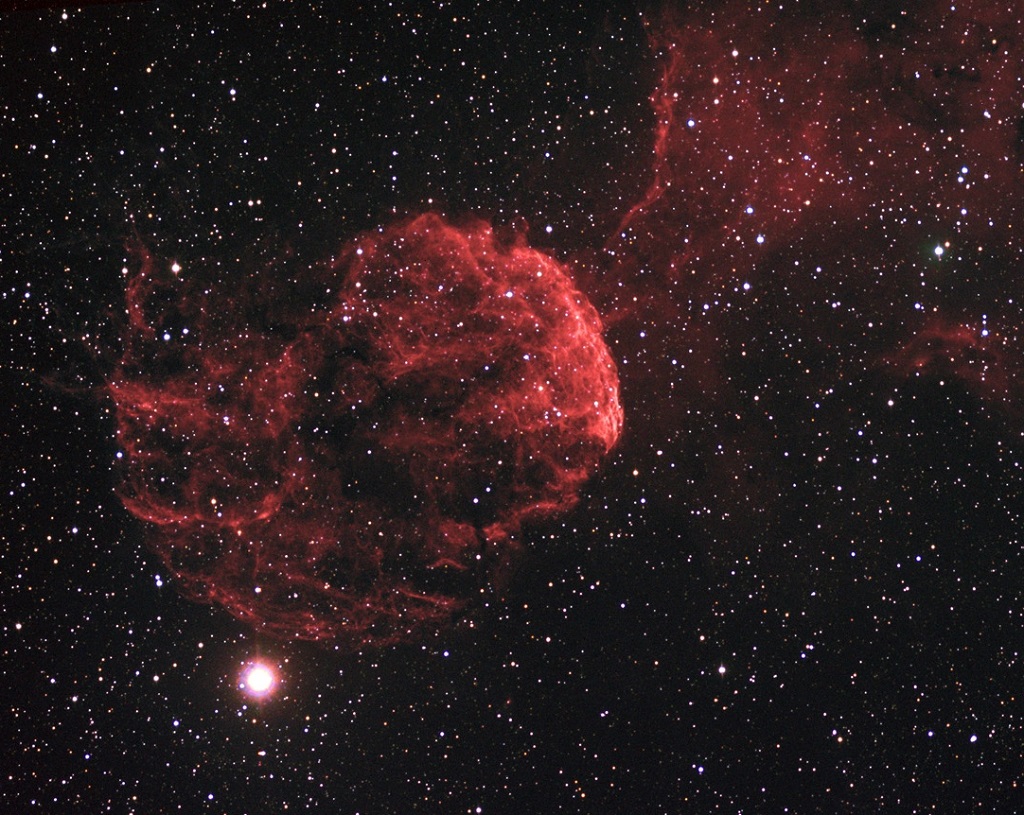 The Jellyfish Nebula (also known as IC 443 and Sh2-248) is a large supernova remnant of some 70 light-years across that lies near the star Eta Geminorum, roughly 5,000 light-years away from Earth in the constellation of Gemini (the Twins, Castor & Pollux).

A supernova occurs when a star explodes in the final phase of its life. After some supernova explosions, when a massive star – more than 8 and below about 20 solar masses – collapses and becomes so dense that protons and electrons squish together to form neutrons, there remains a small, ultra-dense neutron star. The explosion throws a large cloud of dust and hot gas into space surrounding the neutron star. When this slams into the existing interstellar medium, it heats up so much it glows in X-rays.

This remnant’s age is still uncertain, but the Jellyfish Nebula is most likely the remnant of a supernova that occurred 3,000 – 30,000 years ago. The same supernova explosion created the neutron star CXOU J061705.3+222127 (or J0617 for short), the collapsed remnant of the stellar core which is travelling at approximately 800,000 kilometers per hour away from the site.

What is unusual about this supernova remnant is that its shell-like form has two halves that have different radii, structures and emissions. The larger north-eastern shell, seen here as the semi-circle on the right side of the supernova remnant, is composed of complex filaments that are emitting light from iron, neon, silicon and oxygen gas atoms and dust particles heated by the blast from the supernova.

The smaller southern shell, seen here in on the left side of the nebula, is constructed of denser clumps and knots primarily emitting light from hydrogen gas and heated dust. These clumps are part of a molecular cloud which can be seen in this image as the black cloud cutting IC 443 in two halves. Therefore, it is one of the best examples of a supernova remnant interacting with a molecular cloud.