The Lagoon Nebula, an emission nebula in Sagittarius 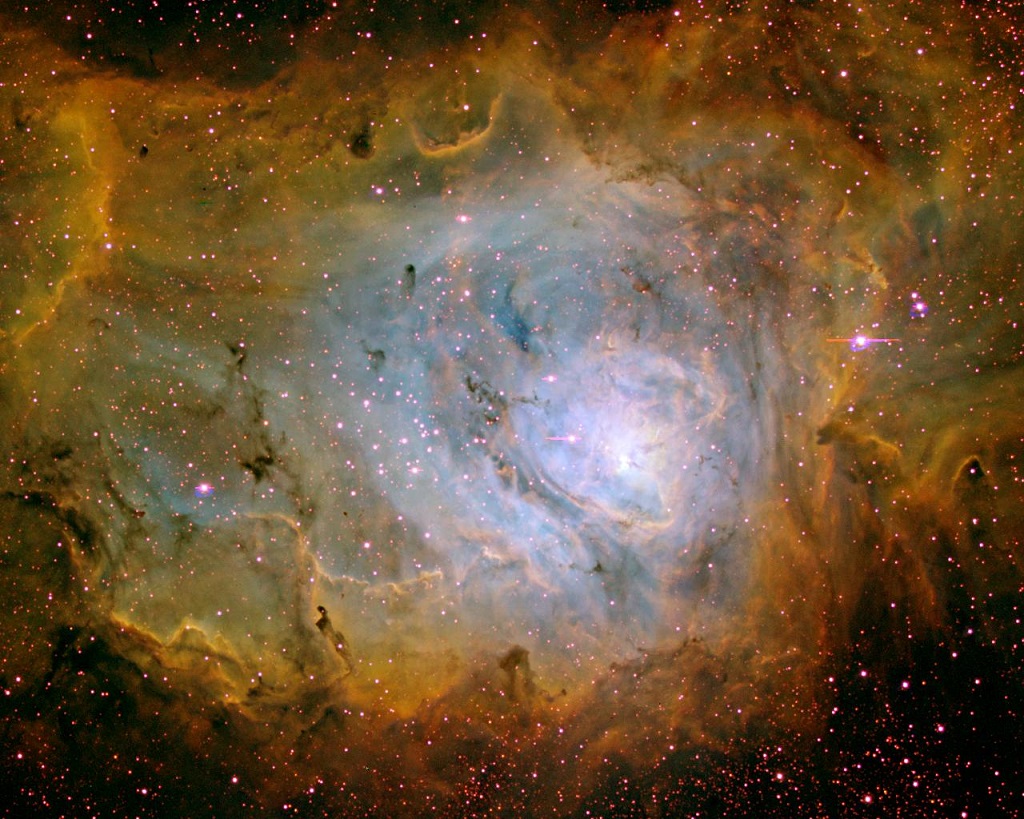 The Lagoon Nebula (also known as Messier 8, NGC 6523 and Sh2-25) is an emission nebula that measures about 110 by 50 light-years, located between 4,000 – 6,000 light-years away from Earth in the constellation of Sagittarius (the Archer), and hence, toward the center of our Milky Way galaxy.

The massive stars hiding within the heart of this star-forming (H II region) give off enormous amounts of ultraviolet radiation, ionizing the gas and causing it to shine, as well as sculpting the surrounding nebula into strange shapes.

This giant cloud of glowing interstellar gas and dust is currently undergoing vivid star formation, and has already formed a considerable open cluster in the Eastern half of the Lagoon Nebula. Cataloged as NGC 6530, this cluster is estimated to be about 2 million years old and contains 50–100 young stars that scatter in a moderate range of brightness.

One of the remarkable features of the Lagoon Nebula is the presence of dark nebulae known as ‘Bok globules’ which are collapsing protostellar clouds with diameters of about 10,000 AU (1 AU = 1 Astronomical Unit = the distance between the Earth and the Sun = 149,597,871 kilometers or 92,955,807 miles). Some of the more conspicuous Bok globules have been cataloged in E.E. Barnard’s catalog of dark nebulae: the comet-shaped Barnard 88 (B88), the small Barnard 89 (B89), and the long, narrow black Barnard 296 (B296).

Closely by this Hourglass Nebula is the apparently brightest of the stars associated with the Lagoon Nebula, 9 Sagittarii (mag 5.97, spectral class O5), which surely contributes a lot of the high energy radiation which excites the nebula to shine.

In 2006 the first four Herbig-Haro objects were detected within the Hourglass Nebula, also including HH 870. Herbig-Haro objects are narrow jets of gas and matter, ejected by newly born stars at speeds of several hundred kilometers per second – named after astronomers George Herbig and Guillermo Haro who studied the outflows in the 1950s. They collide with nearby gas and dust in the interstellar medium, producing bright shock fronts that glow as the gas is heated by friction. This provides the first direct evidence of active star formation by accretion within the Hourglass.

The Lagoon Nebula is one of only two stellar nurseries which, on a clear night, is faintly visible to the naked eye from mid-northern latitudes. Like many nebulas, it appears pink in time-exposure color photos but is gray to the eye peering through binoculars or a telescope, human vision having poor color sensitivity at low light levels.

This image is taken with the Curtis-Schmidt Telescope, and shows the nebula’s emission in three exact colors specifically emitted by hydrogen, oxygen, and sulfur.