The LMC, an irregular dwarf galaxy in Dorado 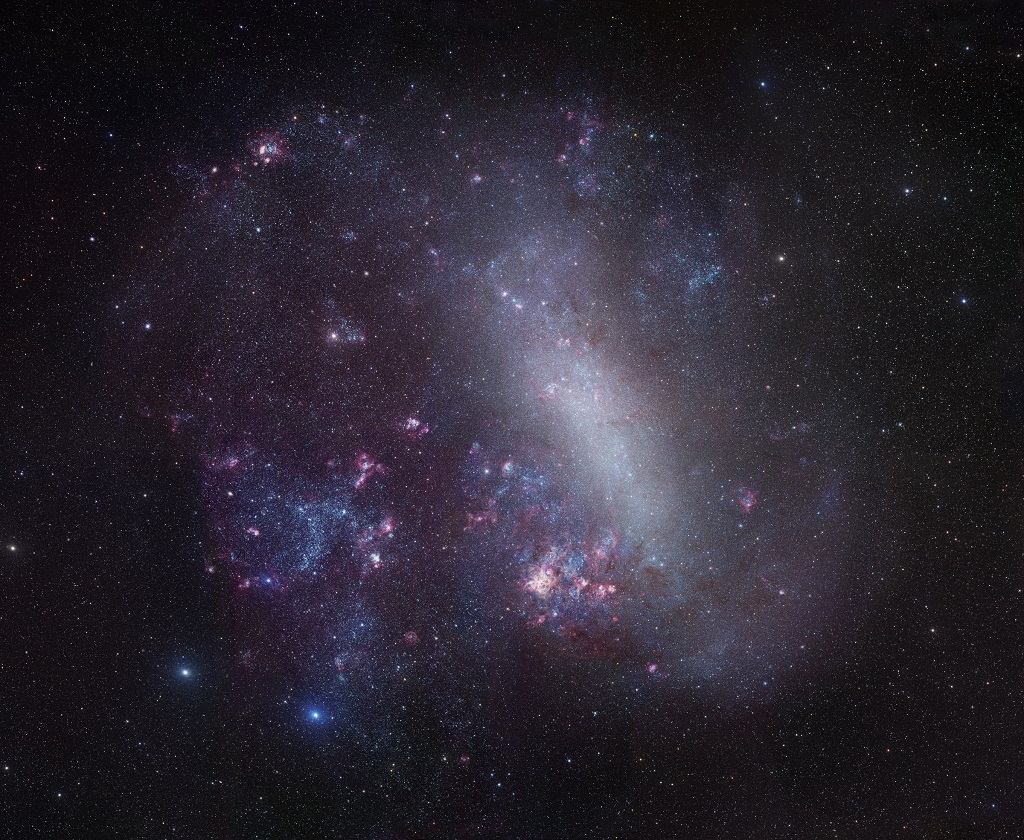 This galaxy is the fourth largest in the Local Group, after the Andromeda Galaxy (M31), the Milky Way, and the Triangulum Galaxy (M33). And, it is the third closest galaxy to the Milky Way, with the Sagittarius Dwarf Spheroidal and the Canis Major Dwarf Galaxy (though its status as a galaxy is under dispute) lying closer to the center of the Milky Way.

Although the LMC is an irregular galaxy, it has traces of spiral structure and even contains a very prominent off-centered bar, suggesting that it may have previously been a barred spiral galaxy. The LMC’s irregular appearance is possibly the result of tidal interactions with both the Milky Way and the SMC.

The LMC is full of remarkable objects including the giant, active starburst (HII) region, called the Tarantula Nebula (also known as 30 Doradus, or NGC 2070). On February 24, 1987 a Type II supernova, called SN 1987A, occurred in the outskirts of the Tarantula Nebula in the LMC. It resulted from the rapid collapse and violent explosion of a massive star, and was the brightest and closest supernova observed since the invention of the telescope.

Massive sequential and triggered star formation is occurring on a large scale in the LMC. It contains a diverse population of young stars and star-forming HII regions preferentially located on the edges of supergiant shells of neutral gas formed from the winds of massive stars and supernovae.

The internal structure of the LMC is peculiar. The off-centered bar has an inner disk that rotates counter to the outer disk. The inner disk was probably acquired through a merger event in the remote past. The galaxy shows various warps, rings, and tidal features, all indicators of remote and recent encounters with its neighbor, the Milky Way.

The LMC speeds away from our Milky Way galaxy at about 378 kilometers (235 miles) per second while the SMC has a speed of 302 kilometer (188 miles) per second. There are two possible explanations for these high speeds:

1) The mass extent of the Milky Way (now estimated to be some 1,000 to 1,500 solar masses) is actually larger. If the Clouds are gravitationally bound to the Milky Way, then the Milky Way must be much more massive than data suggest. The excess mass would pull on the Clouds, keeping them “close at hand.”

2) The Magellanic Clouds are not gravitationally bound to the Milky Way, perhaps they are travellers just passing through the neighborhood. If calculations of the Milky Way’s mass are accurate, then the Galaxy is not massive enough to hold onto its companions. In a few billion years, they will escape from the Milky Way.

The Magellanic Clouds contain a remarkable network of neutral gas, enough in total to form 500 million suns. Both galaxies are embedded in a common envelope of neutral hydrogen gas. A gaseous bridge forms an interface between the two galaxies, known as the Magellanic Bridge. This bridge is thought to have formed from the last major interaction between the two Magellanic clouds some 200 million years ago.

Another impressive filamentary gaseous structure exists which starts at the bridge and extends in a great 300,000 light-year arc, where it crosses the south galactic pole of the Milky Way. It contains some 200 million solar masses of material and is known as the Magellanic Stream. This thick filament of neutral hydrogen gas was probably torn from the Magellanic system by the Milky Way some 1.5 billion years ago during a close encounter.

Together with the SMC, the LMC can be seen with the unaided eye. They are visible as faint “clouds” in the night sky of the southern hemisphere straddling the border between the constellations of Dorado and Mensa (the Table Mountain), and the LMC appears from Earth more than 20 times the width of the full moon.