The Leo Triplet, a small group of galaxies in Leo 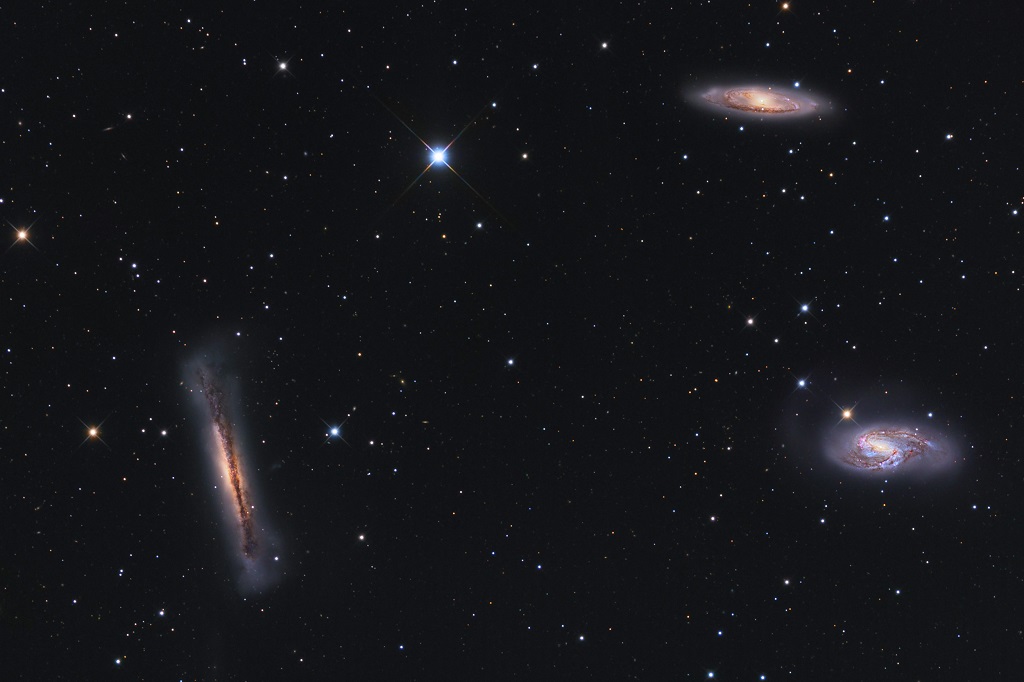 The Leo Triplet (also known as the M66 Group or Arp 317) is a small group of interacting galaxies, located about 35 million light-years away from Earth in the constellation of Leo (the Lion). It consists of the large spiral galaxies NGC 3628 (left), M65 (top) and M66 (bottom right). One or two other nearby galaxies may also be group members, like the starburst galaxy NGC 3593.

NGC 3628 is an obviously disturbed, unbarred spiral galaxy, seen edge-on. Its disk, which is divided by a broad dark dust lane, fans out near the galaxy’s edge. The broad equatorial dust lane obscures the galaxy’s bright central region, and hides most of the bright young stars in its spiral arms. The gravitational pull of its neighboring galaxies has most likely tipped the plane of NGC 3628, and made its central dust lane “wobbled” in appearance.

This galaxy has an approximately 300,000 light-years long tidal tail. The distorted shape and tidal tail suggest that NGC 3628 is interacting gravitationally with the other spiral galaxies in the Leo Triplet.
Another indication therefor is that the stars orbit the galaxy in the opposite direction of the gas. It is surmised that recent galactic mergers generates these kinds of dynamics.

Messier 65 is an intermediate spiral galaxy that consists mainly of older stars. It has a prominent and bright central bulge and tightly wound spiral arms, plus a prominent dust lane marking the facing edge. One of the spiral arms seems slightly warped, probably due to the interaction with its companion galaxies. Its relatively recent burst of star formation is also suggestive of some external disturbance.

Messier 66 is also an intermediate spiral galaxy. With a diameter of about 95,000 light-years across it is the largest, and also the brightest, member of the Leo Triplet. Its core and bar-like structure consists of a concentration of older stars, and while the bar seems devoid of star formation, the bar ends are actively forming stars.

The asymmetric spiral arms, laced with dust lanes and bright star clusters, are somewhat distorted. They seem to climb above the galaxy’s main disk and an apparently displaced nucleus. Messier 66′s once orderly shape has most likely been distorted by the gravitational pull of its two neighbors.