The Manatee Nebula, a supernova remnant in Aquila 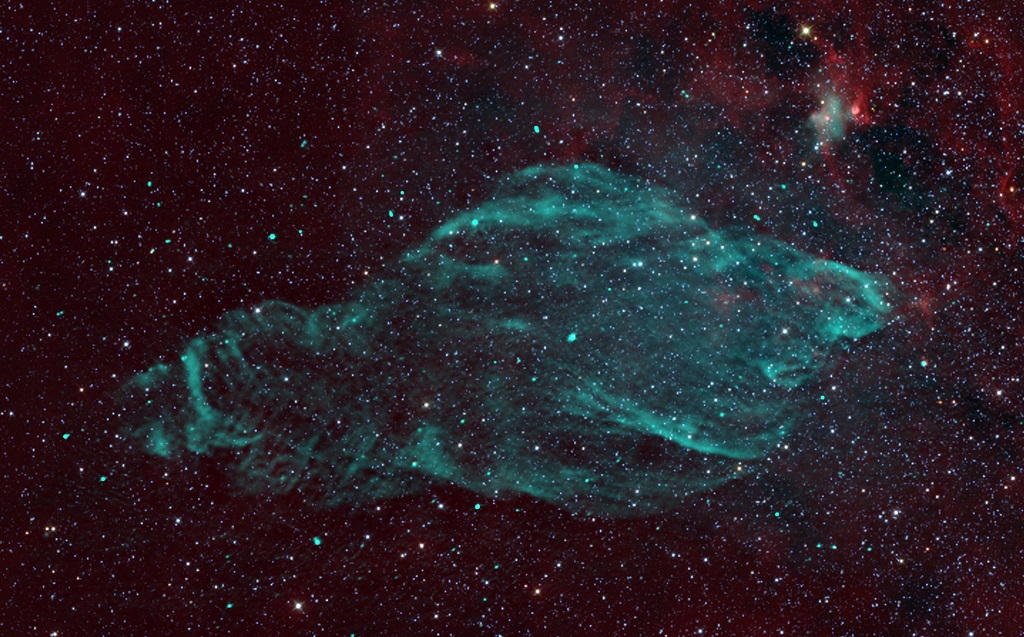 The Manatee Nebula (also known as W50 or SNR G039.7-02.0) is a supernova remnant of nearly 700 light-years across, located about 18,000 light-years away from Earth in the northern constellation of Aquila (the Eagle).

This giant cloud that resembles a beloved endangered species, the Florida Manatee, formed when a giant star exploded as a supernova around 20,000 years ago, sending its outer gases flying outward in an expanding bubble.

The remaining relic of that giant star, most likely a black hole, feeds on gas from a very close, companion star. The cannibalized gas collects in a disk around the black hole. The disk and black hole’s network of powerful magnetic field lines acts like an enormous railroad system to snag charged particles out of the disk and channel them outward in powerful jets traveling at nearly the speed of light. This double star system of a black hole and its feeder star, with an orbital period of almost 14 days, shines brightly in both radio waves and X-rays and is known collectively as the SS433 microquasar.

Over time, the micro quasar’s jets have forced their way through the expanding gases of the W50 bubble, eventually punching bulges outward on either side. The jets also wobble, like an unstable spinning top, and blaze vivid corkscrew patterns across the inflating bulges.

Optically bright astronomical objects are often nicknamed for their earthly likenesses, such as the Whirlpool Galaxy and the Owl Nebula. Invisible W50 comes by its less catchy name by being the 50th radio source listed in the Westerhout Catalog, assembled in 1958 by Dutch astronomer, Gart Westerhout.

However, Heidi Winter, NRAO’s Director’s Executive Assistant, saw the likeness to a manatee, the endangered marine mammals known as “sea cows” that congregate in warm waters in the southeastern United States. Florida Manatees are gentle giants that occupy a great part of their day resting, often on their backs with their flippers crossed over their large bellies, in a pose closely resembling W50.

Dangerous encounters with boat propellers injure many of these curious herbivores, giving them deep, curved scars similar in appearance to the arcs made by the powerful jets on the large W50 remnant. Thanks to Ms. Winter’s suggestion, the National Radio Astronomy Observatory has adopted a nickname for W50: The Manatee Nebula.

This image of the Manatee Nebula in radio (green) against the infrared background of stars and dust (red) is taken by the National Science Foundation’s (NSF) Karl G. Jansky Very Large Array (VLA) radio telescope.