The Rho Ophiuchi Cloud, a dark nebula in Ophiuchus 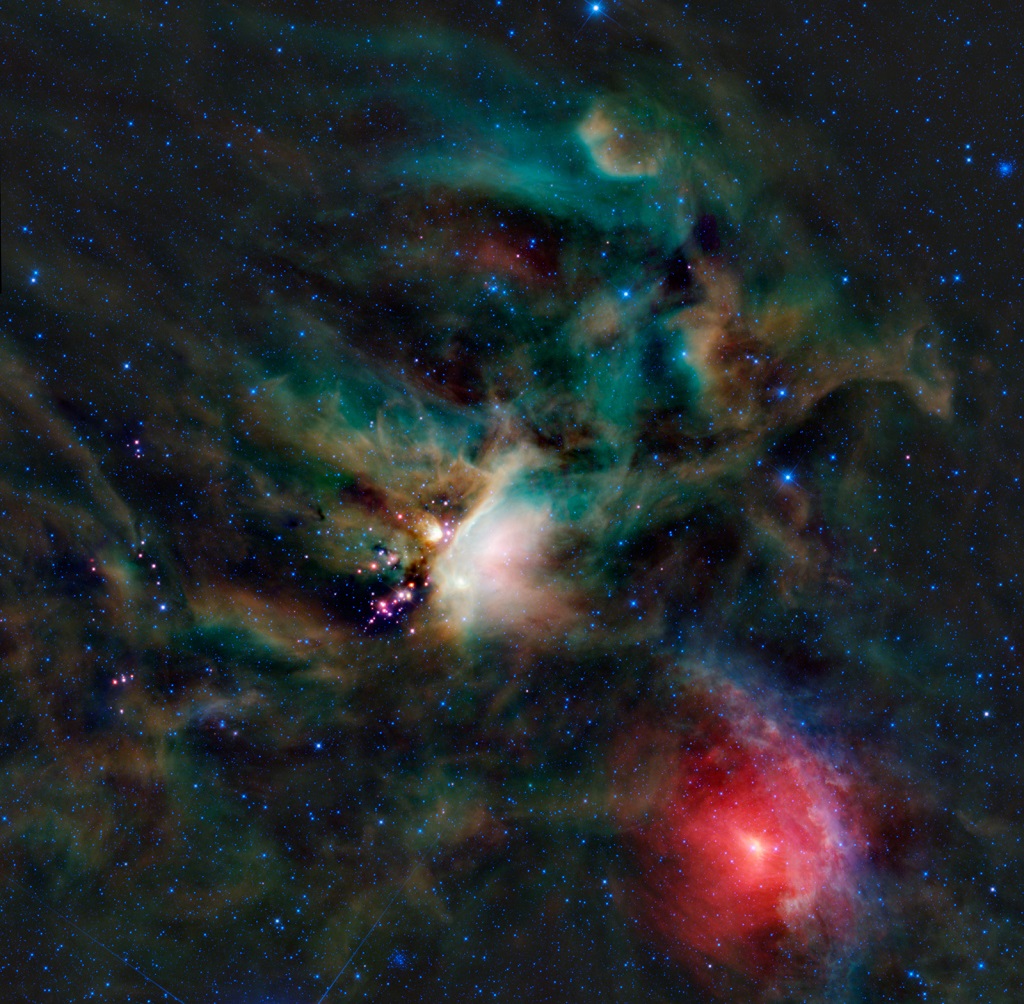 The Rho Ophiuchi Cloud complex (Rho Oph for short, or the Ophiuchus Molecular Cloud) is a dark nebula of gas and dust within our Milky Way that is located about 460 light-years away from Earth in the constellation of Ophiuchus (the Serpent-bearer). It is one of the closest star-forming regions to our Solar System.

It consists of two major regions of dense gas and dust. Lynds 1688, the large main cloud of molecular hydrogen, a key molecule allowing new stars to form from cold cosmic gas, with two long filaments trailing off in different directions. The other, Lynds 1689, has a star-forming region with one long filament.

The temperatures of the clouds range from 13–22 Kelvin, and there is a total of about 3,000 times the mass of the Sun in material. Over half of the mass of the complex is concentrated around Lynds 1688, and this is the most active star-forming region.

Lynds 1688 is home to more than 300 young stars, including 16 protostars. Their median age is only 300,000 years, very young compared to some of the universe’s oldest stars, which are more than 12 billion years old. It also houses 123 T Tauri stars (very young, variable stars) with dense circumstellar disks, and 77 with thinner disks, where planets might form. These stars have estimated ages ranging from 100,000 to a million years.

One of the older objects, a million-year-old star, at the edge of Lynds 1688 was found to have a circumstellar disk seen nearly edge on. The mass of the disk of gas and dust is at least twice that of the planet Jupiter and its radius measures about 45 billion kilometers, or 5 times the size of the orbit of Neptune. The star at the center of the disk has a temperature of 3,000 Kelvin and is emitting 0.4 times the luminosity of the Sun.

The first brown dwarf to be identified in a star-forming region was Rho Oph J162349.8-242601, located in the Rho Ophiuchi cloud.

The amazing variety of different colors seen in this image represents different wavelengths of infrared light. The bright white nebula in the center of the image is glowing due to heating from nearby stars, resulting in what is called an emission nebula. The same is true for most of the multi-hued gas prevalent throughout the entire image, including the bluish bow-shaped feature near the bottom right.

The bright red area in the bottom right is light from the star in the center – Sigma Scorpii – that is reflected off of the dust surrounding it, creating what is called a reflection nebula. And the much darker areas scattered throughout the image are pockets of cool dense gas that block out the background light, resulting in absorption, or dark, nebulae. WISE’s longer wavelength detectors can typically see through dark nebulae, but these are exceptionally opaque.

The bright pink objects just left of center are baby stars that are just now forming; many of them are still enveloped in their own tiny compact nebulae. In visible light, they are completely hidden in the dark nebula that surrounds them, which is sometimes referred to as their baby blanket.

The colors used in this image represent specific wavelengths of infrared light. Blue and cyan (blue-green) represent light emitted at wavelengths of 3.4 and 4.6 microns, which is predominantly from stars. Green and red represent light from 12 and 22 microns, respectively, which is mostly emitted by dust. The field of view is about 14 light-years across. The molecular cloud can be found 1° south of the star ρ Ophiuchi.