The Trifid Nebula, a star-forming region in Sagittarius 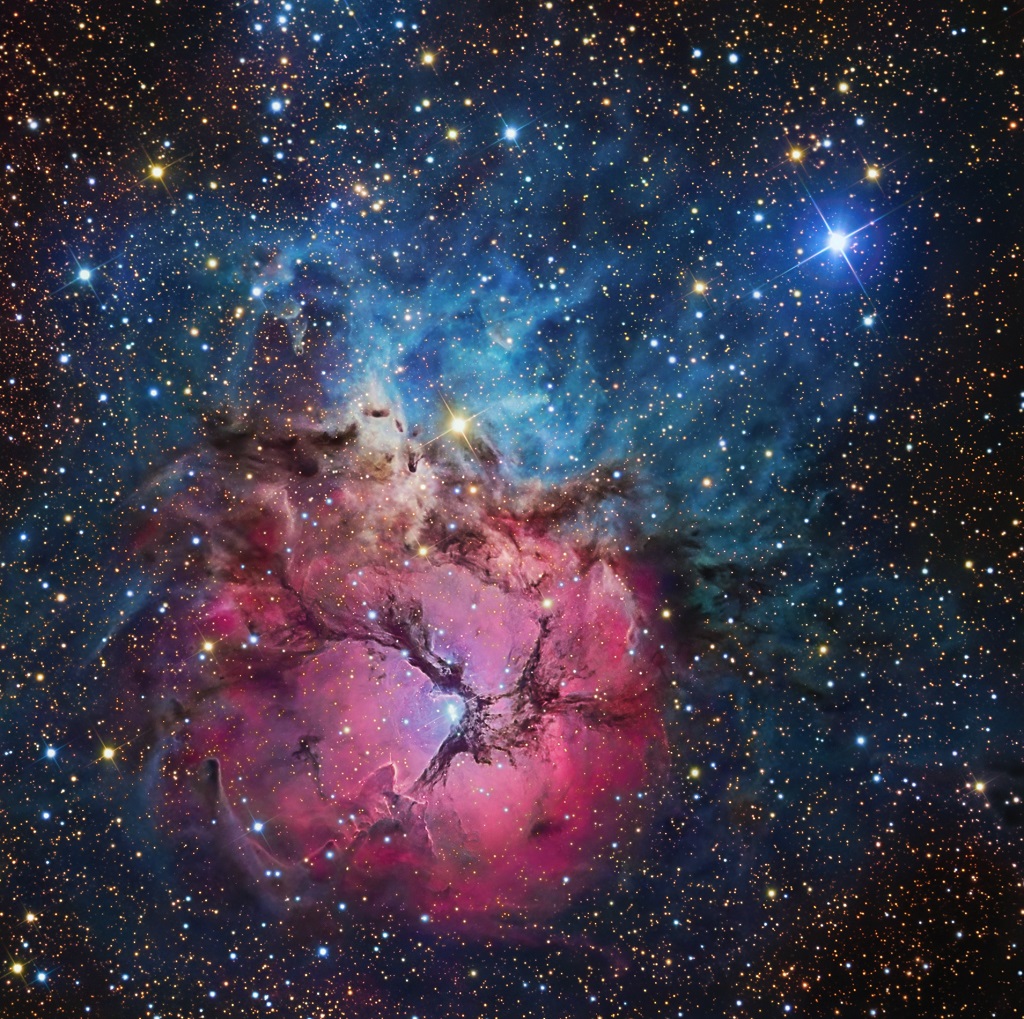 The Trifid Nebula (designated Messier 20 and NGC 6514) is a star-forming (H II) region of some 40 light-years across, located about 5,200 light-years away from Earth in the constellation of Sagittarius (the Archer). It is estimated to be only 300,000 years old.

Stars, the Sun included, were born within clouds of dusty gas such as the Trifid Nebula. This young nebula contains enough material to make many thousands of suns. Within it a number of young hot stars have already formed.

The Trifid Nebula, meaning ‘divided into three lobes’, is an unusual combination of a red emission nebula with a young open star cluster near its center, surrounded by a blue reflection nebula which is particularly conspicuous to the northern end, and a dark absorption nebula (the apparent ‘gaps’ within the emission nebula that cause the trifid appearance; these are also designated Barnard 85).

The hydrogen molecules in the emission nebula at the Trifid’s core is heated by hundreds of brilliant young stars causing it to emit red light. The dense part of the nebula is a stellar nursery full of embryonic stars (NASA’s Spitzer Space Telescope discovered 30 embryonic stars and 120 newborn stars, not seen in visible light images). The star cluster, known as C 1759-230, may well be the youngest star cluster in our Milky Way galaxy.

The blue color of the reflection nebula comes from cosmic dust grains which preferentially reflect the blue component of starlight as it scatters light from bright new stars that were formed nearby. The largest and hottest of these stars shines most brightly in the hot, blue portion of the visible spectrum.

In some parts of the nebula there are so many dust grains that they hide the glowing gas, producing the dark absorption lanes, which were created in the atmospheres of cool giant stars and in the debris from supernovae explosions. Within these dark lanes, the remains of previous star births and deaths continue to collapse under gravity’s unrelenting attraction. The rising density, pressure and temperature inside these dark blobs will eventually trigger the formation of new stars.

Close-up images show a finger-like stalk in the emission nebula that points from the head of a very dense cloud directly toward the star that powers the Trifid nebula, which is actually a triple system of extremely hot stars. This stalk is a prominent example of evaporating gaseous globules, or ‘EGGs’. The stalk has survived because its tip is a knot of gas that is dense enough to resist being eaten away by the powerful radiation from the star.

The Trifid nebula is situated roughly 2 degrees northwest of the larger Lagoon Nebula (Messier 8). It is rather faint: a telescope is needed in order to see a star surrounded by nebulosity.