The Wild Duck Cluster, an open cluster in Scutum 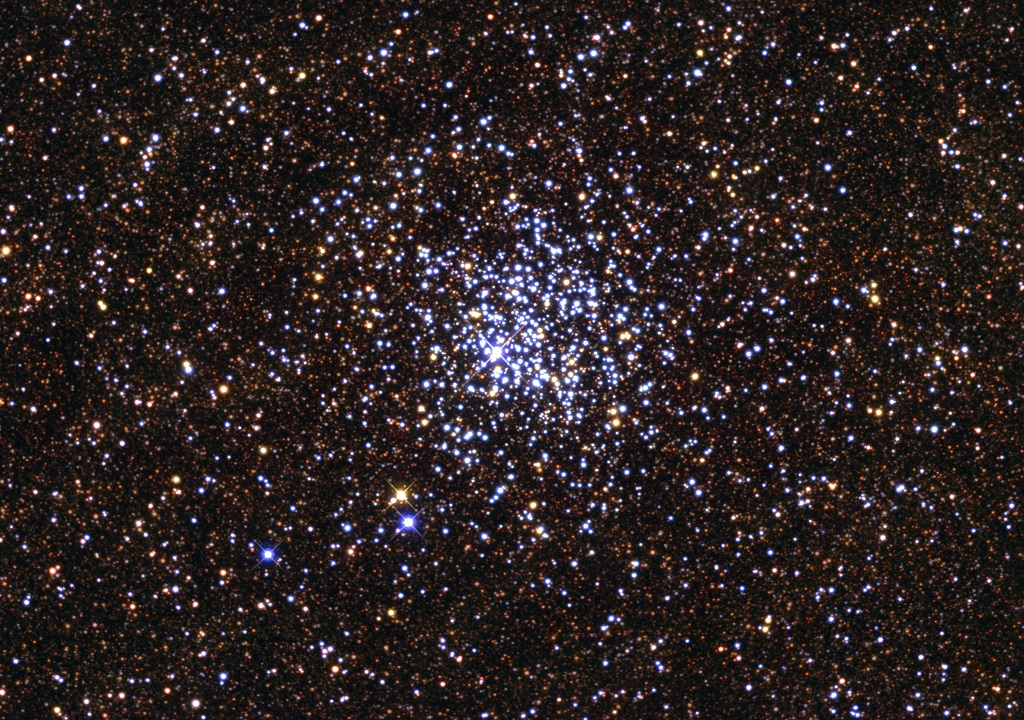 The Wild Duck Cluster (also known as Messier 11 or NGC 6705) is an open cluster of some 23 light-years across, located about 6,200 light-years away from Earth in the small constellation of Scutum (the Shield), only a few degrees from the Galactic plane, while it is receding at approximately 22 kilometers per second. Its name derives from the brighter stars forming a triangle which could represent a flying flock of ducks.

An open cluster is a physically related group of a few hundred to a couple of thousand stars, held together by mutual gravitational attraction. The stars in an open star cluster all formed from the same molecular cloud at about the same time, and they are all of similar initial chemical composition. But, the stars have different masses, ranging from about 80-100 solar masses for the most massive stars in very young clusters to less than about 0.08 solar masses. Over a time period of a few hundred million to a billion years or so they will slowly drift apart and disperse, so such clusters are usually very young and short lived. Our Sun probably formed in an open cluster.

The Wild Duck Cluster is one of the richest and most compact of the known open clusters, containing about 2900 stars, many of which are blue giants, or more highly evolved yellow and red giants. About 500 stars are brighter than magnitude 14, so an observer at the center of the cluster would see several hundred first magnitude stars!

The age of the Wild Duck Cluster has been estimated to be about 220 – 250 million years, what is about 5% the age of our Solar System. In a billion years or so, all the brightest stars in the cluster will have evolved into cool supergiants and exploded as supernovae, leaving behind large numbers of low mass, relatively faint stars, whose lives will be much longer and whose end will be much less dramatic.

On dark places Messier 11 is easily visible with the naked eye as a fuzzy ball of light. In a binocular the cluster shows itself as a rich and compact open cluster. The dozens of stars you can see, all about equally bright, are standing beautifully in contrast against the faint glow of the Milky Way’s plane in the background. With a telescope it is best to use the lowest possible magnification so that the cluster fits nicely in the screen.