NGC 300, a spiral galaxy in Sculptor 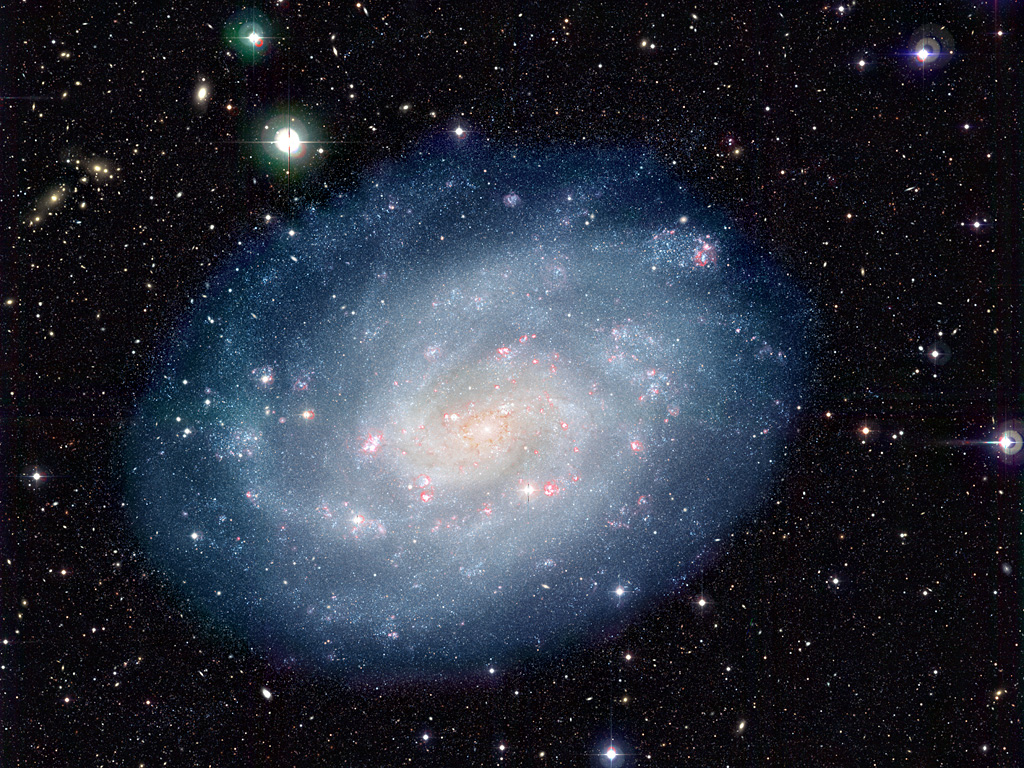 NGC 300 is a spiral galaxy that lies around 6.07 million light-years away from Earth in the southern constellation of Sculptor, while it is receding from us at about 144 kilometers per second. It is some 47 thousand light-years across, but Gemini was able to resolve faint stars 47,000 light-years from the galaxy core, giving the galaxy a diameter of at least 94,000 light-years.

It is one of the closest galaxies to the Local Group, and probably lies between us and the Sculptor Group, a nearby group of 13 galaxies. NGC 300 and the irregular galaxy NGC 55 are only a million or so light-years apart, and probably form a gravitationally bound pair. Until recently, they were considered members of the Sculptor Group, but are now known to be foreground galaxies.

NGC 300 is a relatively diffuse spiral galaxy with a poorly defined core. Young hot blue stars dominate the outer spiral arms of the galaxy, while the older stars congregate in the inner regions. Gases heated by hot young stars and shocks due to winds from massive stars and supernova explosions appear in pink in this image. The stars in the faint outer regions of NGC 300 are the dying remnants of an ancient stellar population. When the galaxy was young, and the outer regions were still actively forming stars, the outer parts of the galaxy were just as bright as the modern core.

Besides millions of individual stars, clusters of stars and nebulae, NGC 300 also contains a huge cloud of ionized hydrogen (a “HII shell”). This star-forming region measures about 2,000 light-years in diameter, thus dwarfing even the enormous Tarantula Nebula in the Large Magellanic Cloud.

This image is a color-composite of the nearby spiral galaxy NGC 300 and the surrounding sky field, obtained in 1999 and 2000 with the Wide-Field Imager (WFI) on the MPG/ESO 2.2-m telescope at the La Silla Observatory.

1. Wolf-Rayet (WR) stars are extremely rare (only about 300 are known presently) and short-lived super-hot blue giant stars which start their lives with dozens of times the mass of our Sun, but rapidly loose most of it through a powerful stellar wind, with speeds of millions of kilometers per hour. They are also highly luminous, from tens of thousands to several million times the luminosity of the Sun, although not exceptionally bright visually since most of their output is in far ultraviolet and even soft X-rays. Often occurring in binary systems, they are doomed, within a few million years, to explode as supernovae.