The Umbrella Galaxy, a spiral galaxy in Coma Berenices 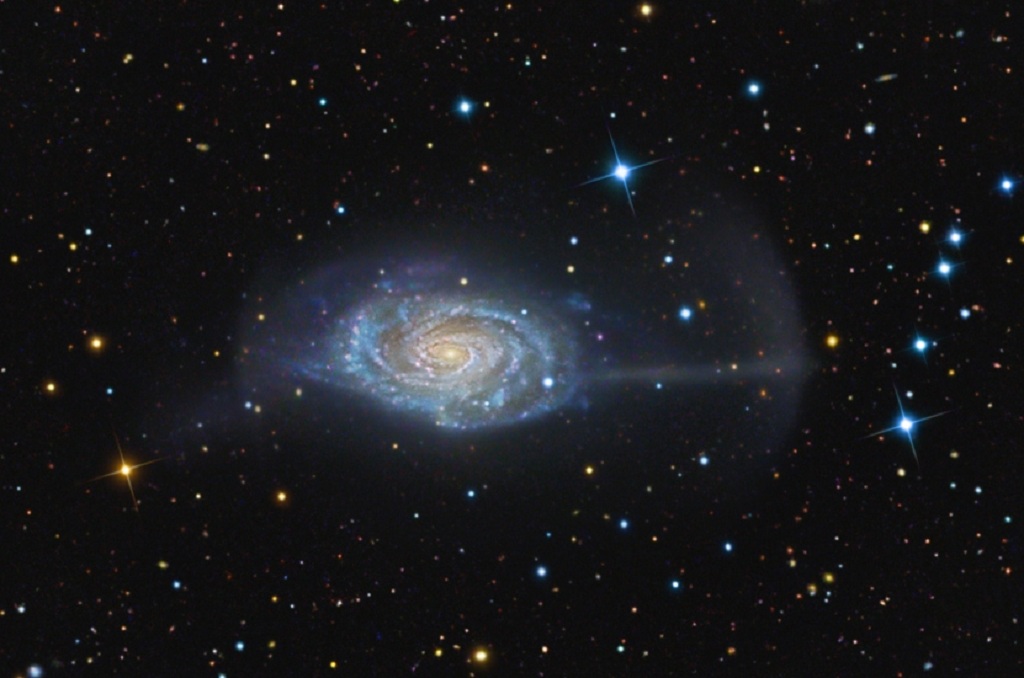 The Umbrella Galaxy (designated NGC 4651 and Arp 189) is a spiral galaxy located on the outskirt of the Virgo Cluster of galaxies of which it is a member, at a distance not well determined that ranges from 35 to 72 million light-years in the constellation of Coma Berenices. It is receding from us at 788 kilometers per second.

The Umbrella Galaxy has an active galaxy nucleus (AGN) and a fine spiral structure. Unlike most spiral galaxies of the Virgo Cluster, NGC 4651 is rich in neutral hydrogen, also extending beyond the optical disk, and its star formation is the typical for a galaxy of its type.

The giant cosmic umbrella is composed of stellar streams, being the remnants of a much smaller galaxy that has been torn apart by NGC 4651’s tidal forces, something that explains why the Umbrella Galaxy has been included on Halton Arp’s Atlas of Peculiar Galaxies as Arp 189 –as a galaxy with filaments. (Arp’s Atlas of Peculiar Galaxies is a catalog of 338 peculiar galaxies produced by Halton Arp in 1966.)

Studies using radiotelescopes of the distribution of its neutral hydrogen show distortions on NGC 4651’s outer regions and a gas clump associated with a dwarf galaxy that may have born in the event that produced the mentioned stellar streams.

The galaxy can be seen with amateur telescopes.