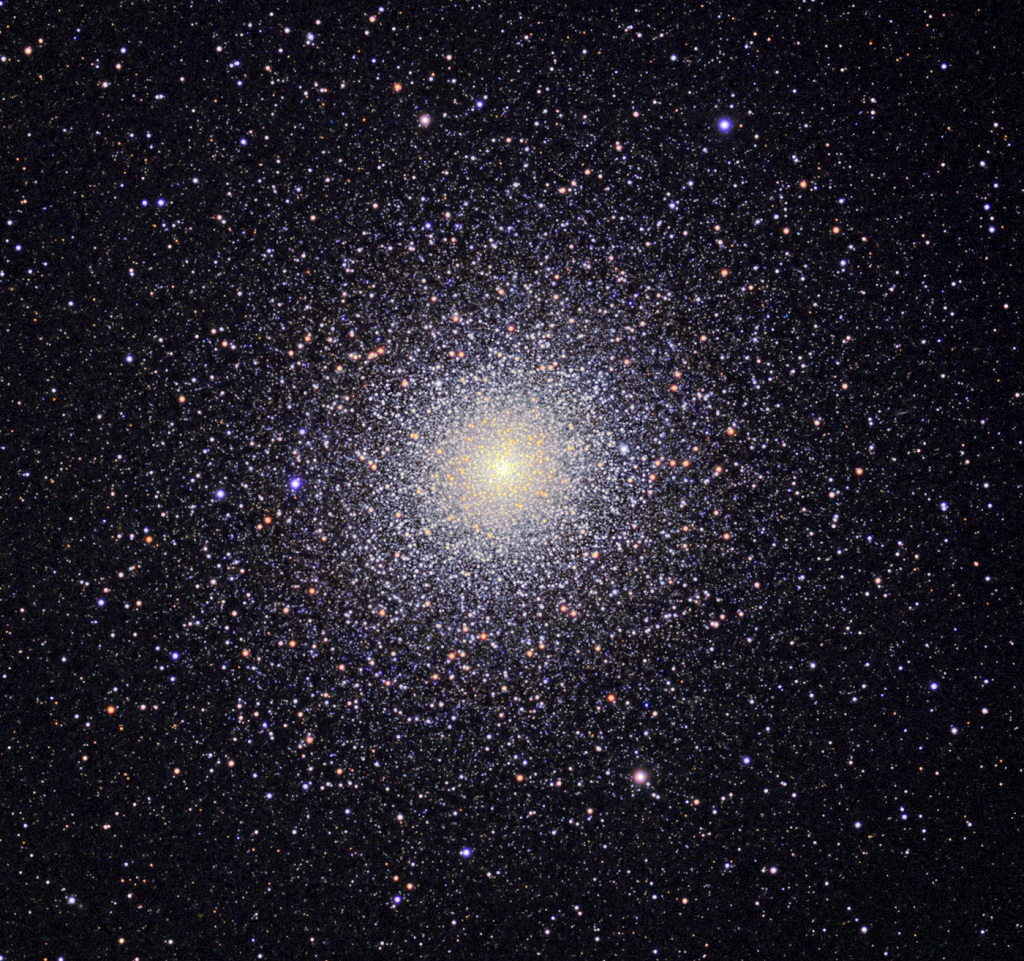 47 Tucanae (NGC 104) or just 47 Tuc is a globular cluster that contains millions of stars in a region of about 120 light-years across, making it one of the most massive globular clusters in the Milky Way galaxy. It is located some 16,700 light-years away in the southern constellation of Tucana (near the Small Magellanic Cloud). The cluster, which approaching us at roughly 19 kilometers per second, is estimated to be approximately 13.06 billion years old!

It is the second largest and second brightest globular cluster in the skies, outshone only by another southern globular cluster, Omega Centauri (NGC 5139). 47 Tucanae is also one of the densest globular clusters in the southern hemisphere. As its name “47 Tucanae” indicates, this object was first cataloged as a star and numbered the 47th in Tucana, before it was recognized as a cluster of stars.

Although the density of stars is very small at the outskirts of a globular cluster, near the centre it can be more than 10,000 times higher than in the local vicinity of our Sun. Just as bumps and jostles are much more likely in a crowded commuter train, so are encounters between stars in a densely populated cluster more likely than here in our quiet stellar backwater. These encounters can be as dramatic as collisions or even mergers. The crowded conditions make it extremely difficult to identify individual stars accurately.

Globular clusters efficiently sort stars by mass: heavier stars slow down and sink to the cluster’s core, while lighter stars pick up speed and move across the cluster to its periphery. However, there is no evidence (yet) for the existence of any black holes in 47 Tuc; Hubble Space Telescope data provides the strongest constraint on the mass of any possible black hole at its center.

Further, 47 Tuc has 23 known millisecond pulsars, the second largest population of pulsars in any globular cluster, and about a third of the total number of known cluster pulsars. These pulsars are thought to be spun up by the accretion of material from binary companion stars. The companion of one pulsar in 47 Tucanae, 47 Tuc W, seems to still be transferring mass towards the neutron star, indicating that this system is completing a transition from being an accreting binary to a millisecond pulsar. Red giant stars on the outskirts of the cluster are easy to pick out in this sharp image.

The core of 47 Tuc was the subject of a major survey for planets, to look for partial eclipses of stars by their planets. No planets were found, though 10-15 were expected based on the rate of planet discoveries around stars near the Sun. This indicates that planets are relatively rare in globular clusters. A later ground-based survey in the uncrowded outer regions of the cluster also failed to detect planets when several were expected. This strongly indicates that the low metallicity (common in old globulars) of the environment, rather than the crowding, is responsible.