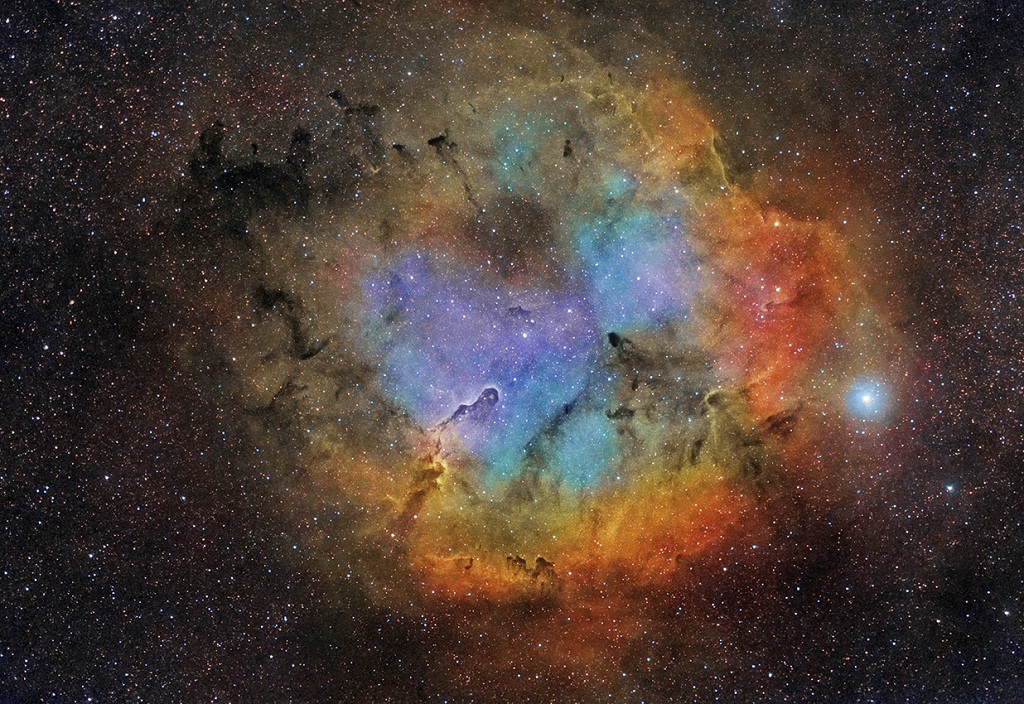 IC 1396 is a large and comparatively faint emission nebula and star forming region over 100 light-years across, located about 2,400 light-years away in the constellation Cepheus. It is energized by the bright, bluish central multiple star called HD 206267.

The nebula mixes glowing cosmic gas and dark dust cloud, and there is a scattering of hot stars, quite widely separated from each other, inside the nebula. Among the intriguing dark shapes within IC 1396, is the Elephant’s Trunk nebula (IC 1396A), seen within the bluish cavity in blue to the lower left in this image. This is a dense globule of gas and dust of more than 20 light-years long, being eroded by the radiation pressure from HD 206267. It is commonly called the Elephant’s Trunk nebula because of its appearance at visible light wavelengths.

The Elephant’s Trunk nebula is a site of star formation. Over 250 young stars in and around the Elephant’s Trunk are identified. Several very young (less than 100,000 years old) stars and two older (but still young, a couple of million years) stars are present in a small, circular cavity in the head of the globule. Winds from these young stars may have emptied the cavity.

The combined action of the light from the massive star ionizing and compressing the rim of the cloud, and the wind from the young stars shifting gas from the center outward lead to very high compression in the Elephant’s Trunk nebula. This pressure has triggered the current generation of protostars.

Numerous other such globules of varying size are scattered throughout the nebula. Some of these are positioned between us and the bright clouds of gas, and so appear as inky black silhouettes. These dense globules can protect themselves from the star’s harsh ultraviolet rays.

The brightest star (38,000 times brighter than the Sun) in the frame, at the right, is mu Cephei. It is a red supergiant star with a diameter larger than the orbit of Saturn, some 2536 times the diameter of the Sun. It is one of the largest stars we know of. Also called Herschel’s Garnet Star, mu Cephei is a variable star that varies in magnitude from 3.4 to 5.1 over a period of approximately 730 days.