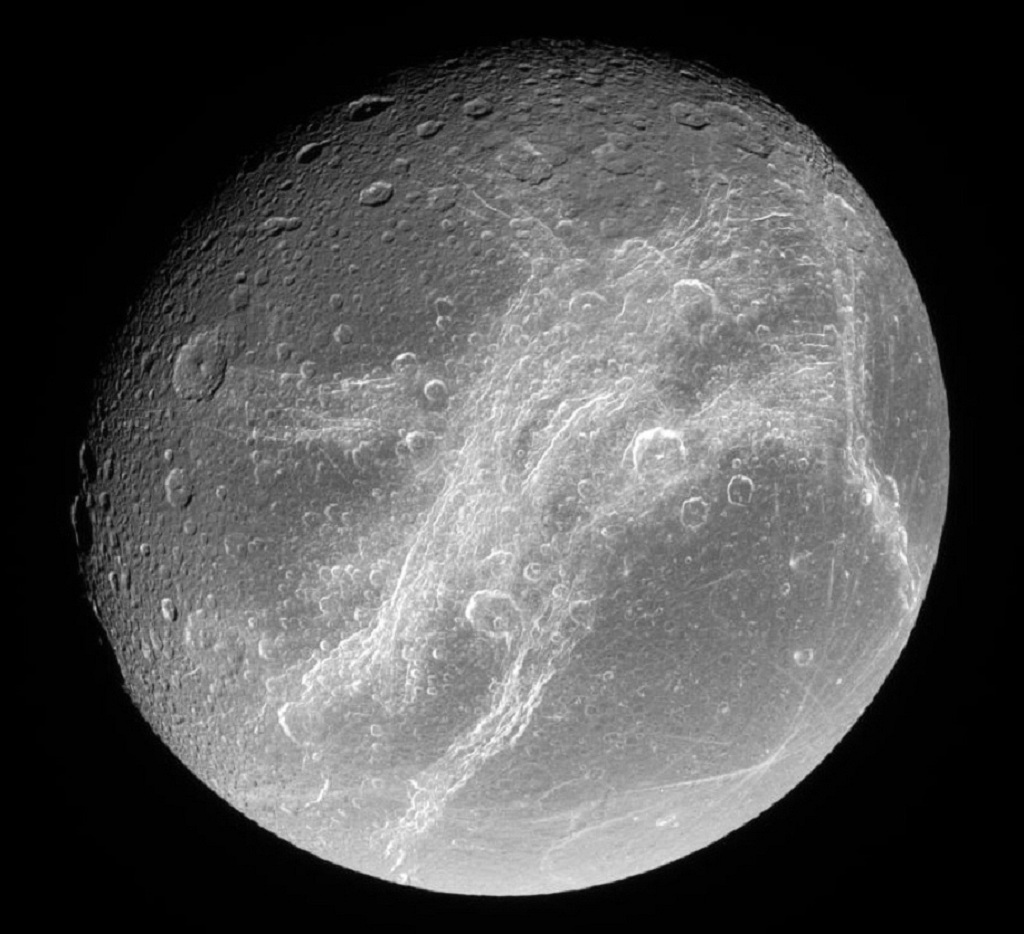 Dione is one of Saturn’s smaller moons and is, at 1123 km (or 700 mi) across, the 15th largest moon in the Solar System. It is more massive than all known moons smaller than itself combined, and is the third densest of Saturn’s moons (after Enceladus and Titan).

Dione orbits Saturn once every 2.74 days at a distance of about 377,400 km (234,000 mi) — roughly the same as that between Earth and its moon, and is locked in a synchronous orbit similar to that of Rhea. This causes the same face of the moon to point towards Saturn at all times.

Dione’s density is 1.48 times that of liquid water, suggesting that about a third of Dione is made up of a dense core (probably silicate rock) with the remainder of its material being ice. At Dione’s average temperature of 87 K, or −186°C), ice is very hard and behaves like rock.

This suggests that during the period of heavy bombardment, Dione was tidally locked to Saturn in the opposite orientation. Because Dione is relatively small, it would have only taken an impact leaving a 35 km (22 mi) crater to spin the moon around. With many craters on Dione exceeding 35 km (22 mi), it is possible that the moon has been spun around more than once throughout its long history. The pattern of cratering since then and the bright albedo of the leading side suggests that Dione has remained in its current orientation for several billion years. However, the fact that Dione seems to have spun exactly 180 degrees is a mystery.

Dione is a world riven by enormous fractures on its trailing hemisphere. It has long, deep, steep-sided depressions, ridges and long narrow depressions. One of the most striking features of this moon is a network of bright ice cliffs – with lengths of tens to hundreds of kilometers, often cutting through plains and craters — created by tectonic fractures.

These bright canyon ice walls (some of them several hundred meters high), were likely created by tectonic fractures. The walls are bright because darker material falls off them, exposing bright water ice. These fracture cliffs suggest Dione experienced tectonic activity in its past. They could be a mature phase of the so-called tiger stripes on Enceladus. At lower right is the feature called Cassandra, exhibiting linear rays extending in multiple directions.

The unmanned Cassini probe, which flew by Dione, detected a thin layer of molecular oxygen ions around the moon, what makes Dione even more interesting than previously thought. Cassini’s instruments were unable to directly detect water from the exosphere, but it seems that highly charged particles from the planets’ powerful radiation belts could split the water in the ice into hydrogen and oxygen.

Dione was first imaged by the Voyager space probes. It has also been probed three times from closer distances by the Cassini orbiter, in 2005, 2010 and 2011.