Hickson Compact Group 44, a group of galaxies in Leo 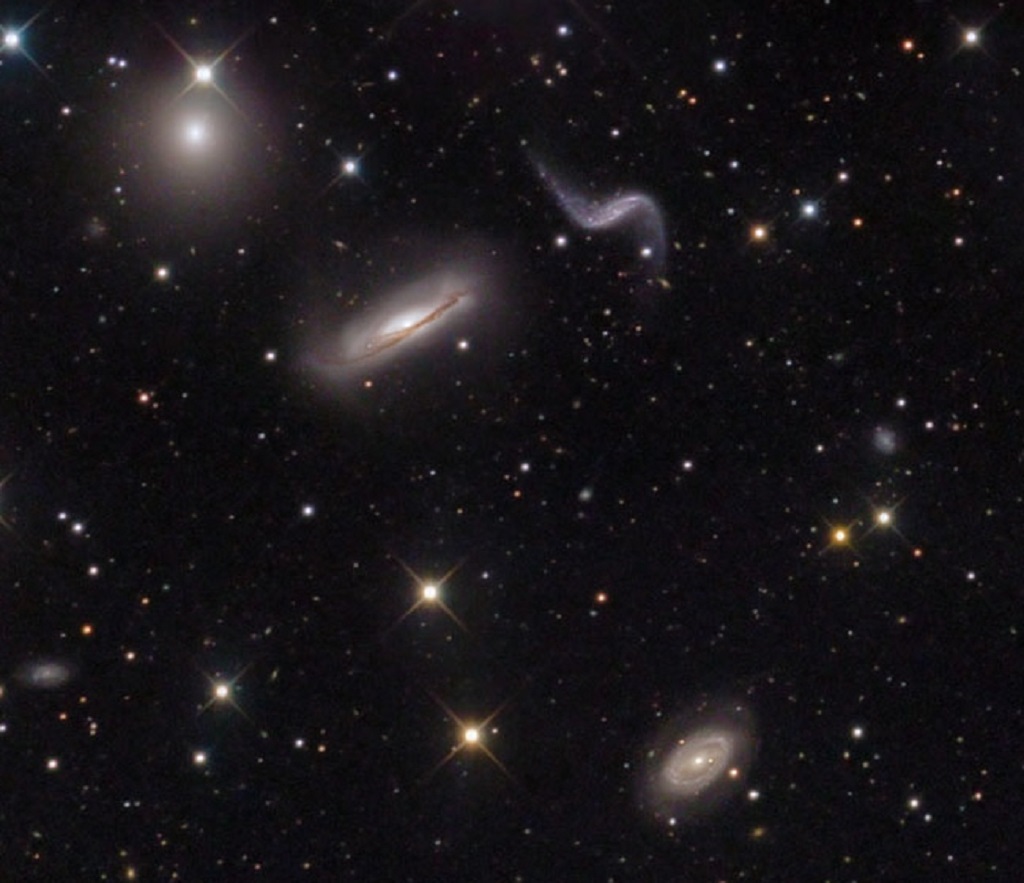 Hickson Compact Group 44 (also known as the NGC 3190 Group) is a gravitational bound group of bright galaxies containing three spiral galaxies and an elliptical galaxy, located about 60-100 million light-years away in the constellation of Leo. Two dwarf galaxies are also part of the group but are not included in the Hickson catalog.

NGC 3190 in the center is spiral galaxy of some about 75,000 light-years across that we see nearly edge on, NGC 3193 on the left is an elliptical galaxy, NGC 3187 above NGC 3190 is another (S-shaped) spiral, but with a prominent central bar, and NGC 3185 on the lower right is also a barred spiral, but its bar is subtle and much smaller relative to its overall size.

Galaxies, like stars, frequently form groups. A group of galaxies is a system containing more than two galaxies but less than the tens or hundreds typically found in a cluster of galaxies. A most notable example is the Local Group of Galaxies, which houses over 30 galaxies including our Milky Way, Andromeda, and the Magellanic Clouds.

Compact groups are relatively short lived entities that form via mergers of galaxies within loose subsystems and groupings. Simulations predict that merging of the group members should proceed rapidly within one billion years. Hickson groups are therefore snapshots at various stages in this merging process. Astronomers believe they may represent an intermediate stage between loose groups and individual galaxies. A better understanding of the nature of HCGs could help explain galaxy formation on a larger scale in the early Universe. Compact groups are surprisingly numerous, and may play a significant role in galaxy evolution.

Signs that galaxies in Hickson 44 are either slowly merging or gravitationally pulling each other apart are present. In particular, NGC 3190 and 3187 show signs of gravitational interaction. NGC 3190, the dominant edge-on spiral galaxy, shows of warping of its dust lane on the side nearer to NGC 3187, and NGC 3187 (also known as ARP 316a) has developed tidal tails well above and below its disk plane. If you look closely, you may also notice a faint halo around NGC 3190, and also a very subtle smudge of light between it and NGC 3193, a bridge of stars being shared between the two giants as they embrace in their cosmic dance.

The bright source on the upper left in this image is a foreground star. In the background you will find hundreds of tiny yellowish and reddish objects. These are not stars, but extremely distant galaxies, hundreds of millions of light years away.