News by Subject » Anne's Image of the Day » Anne’s Picture of the Day: Cometary Globule CG4

CG4, a cometary globule in Puppis 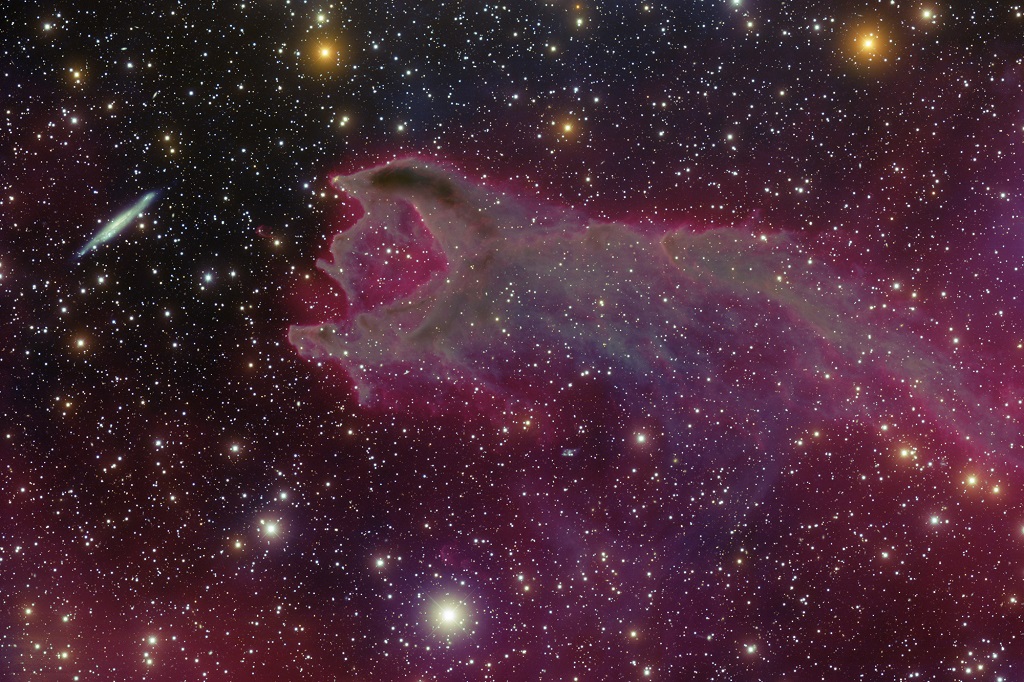 CG4 (also known as The Hand of God) is a cometary globule that lies about 1,300 light-years away from Earth in the southern constellation of Puppis (the Stern). Its “head” is some 1.5 light-years across, and its “tail” is about eight light-years long. This dusty, star-forming region contains enough gas and dust to form several stars about the size of the Sun.

Cometary globules are isolated, relatively small clouds of gas and dust within the Milky Way, formed by the interplay of cold molecular clouds and hot stars. They are typically characterized by dusty heads and elongated tails, what make them look like comets, although they are very much different. These globules are frequently the birthplaces of (low mass) stars, and many show very young stars in their heads. Intense stellar winds from the stars evaporate gas and dust away from the head forming the tail and completing the cometary shape.

The head of CG4 is opaque, but glows because it is illuminated by the light from hot newly forming stars. Their energy is gradually destroying the dusty head of the globule, sweeping away the tiny particles which scatter the starlight. This globule shows a faint red glow from electrically charged hydrogen, and it seems about to devour the edge-on spiral galaxy ESO 257-19 (PGC 21338) in the upper left. In reality, this galaxy is more than a hundred million light-years further away, and only placed near CG4 by chance superposition. The reason for the rupture in the head of this globule is not known.

This image was created using a 64-megapixel Mosaic imaging camera on the National Science Foundation’s Victor M. Blanco 4-meter telescope at Cerro Tololo Inter-American Observatory. It was taken in four filters, three of which are for blue, green and near-infrared light. The fourth is designed to isolate a specific color of red, known as hydrogen-alpha, which is produced by warm hydrogen gas.