News by Subject » Anne's Image of the Day » Anne’s Picture of the Day: Dwarf Galaxy Henize 2-10 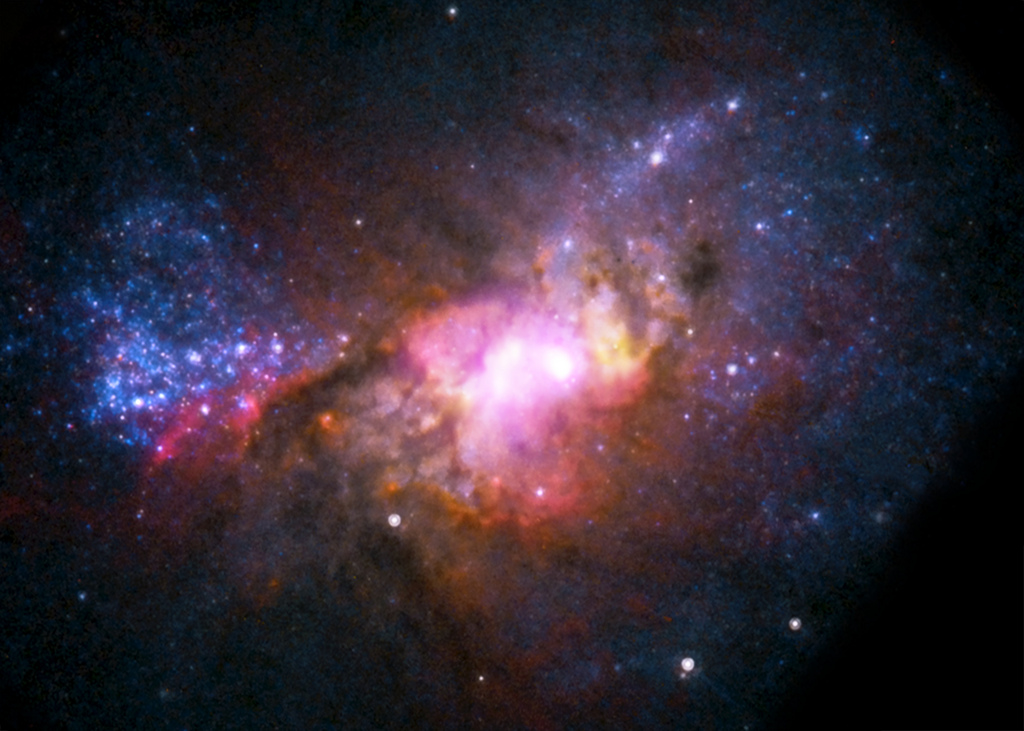 Henize 2-10 (also known as ESO 495- G 021) is an irregular shaped, compact blue dwarf galaxy of some 3,600 light-years across, located 34.24 million light-years away from Earth in the southern constellation of Pyxis (Mariner’s compass), while it is receding from us at about 873 kilometers per second. It has a stellar mass of roughly 3.7 billion times that of our Sun and a total mass of 10 billion solar masses.

This tiny starburst galaxy shows signs of having undergone an interaction with another small galaxy in its past, including tidal-tail-like features in both its gaseous and stellar distributions. It has rapid bursts of star formation, concentrated in numerous star clusters and very dense and young super star clusters. In addition, it is home to and an actively accreting supermassive black hole at its center, drawing in material from its surroundings.

With its furious star formation and its small and irregular form, Henize 2-10 could be a nearby analogue of some of the first galaxies ever formed in the Universe.

Because Henize 2-10 doesn’t have a big bulge of stars at its center it suggests that early galaxies formed their central black holes before developing bulges, and that other (big) galaxies with a bulge and a supermassive black hole may have grown around their central black holes, not the other way around. By studying Henize 2-10, we might be witnessing the early phase of galaxy evolution.

It’s not likely that a black hole of 2 million solar masses could have been built from a merger of little black holes. There must be something specific about Henize 2-10 that could explain why this dwarf galaxy hosts such a large black hole while others of similar size do not. Maybe two clouds of gas colliding at the galaxy’s center collapsed into the massive black hole after the galaxy had already formed.