News by Subject » Anne's Image of the Day » Anne’s Picture of the Day: Elliptical Galaxy NGC 4150 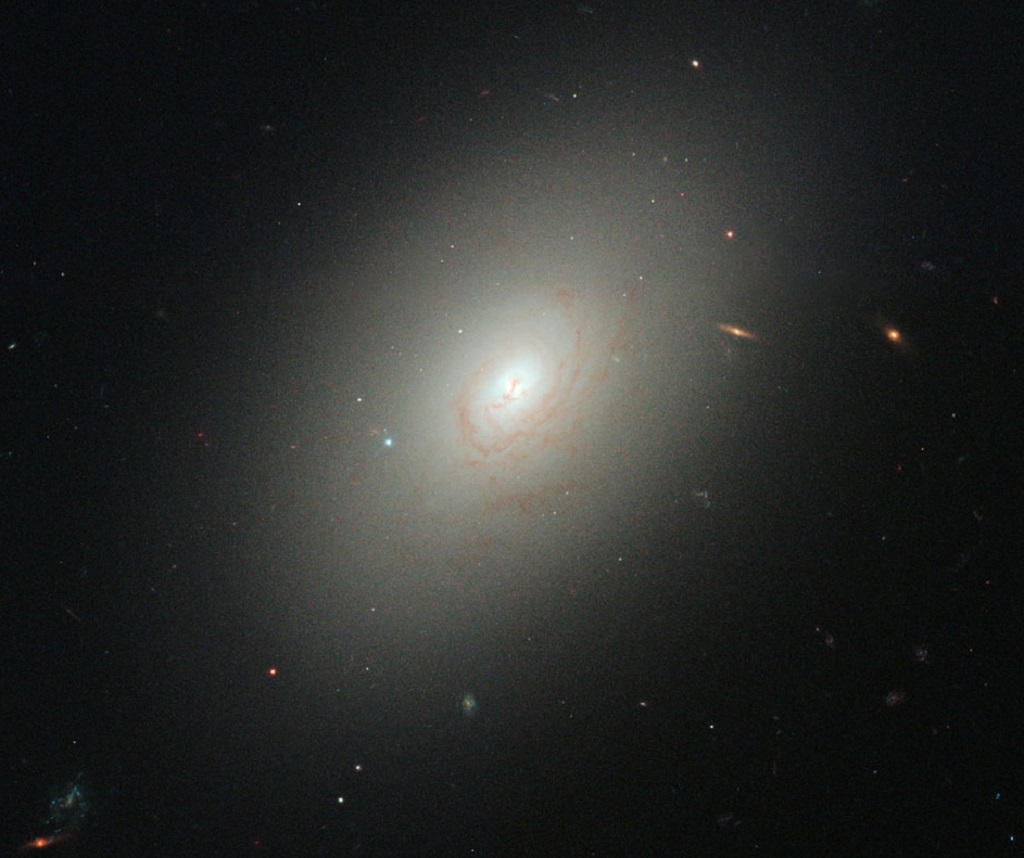 NGC 4150 is an elliptical galaxy of about 30 thousand light-years across, located roughly 45 million light-years away from Earth in the northern constellation of Coma Berenices (Berenice’s Hair). It is receding from us at approximately 219 kilometers per second.

Elliptical galaxies were once thought to have made all of their stars billions of years ago; they had consumed all their gas to make new stars. But new observations have found evidence of fresh star formation in many elliptical galaxies, bringing new life to old galaxies, mostly fueled by cannibalizing smaller galaxies.

Images of NGC 4150 reveal turbulent activity deep inside the galaxy’s exceptionally bright core. Clusters of young, blue stars – that are significantly less than a billion years old – trace a ring around the center that is rotating with the galaxy. The stellar breeding ground is about 1,300 light-years across. Long streamers of dust and gas are silhouetted against the yellowish core, which is composed of populations of older stars.

From analysis of the stars’ colors, astronomers calculated that the boom of star formation started about a billion years ago, a comparatively recent event in cosmological history. The galaxy’s star-making factory has slowed down since then.

We are seeing this galaxy after the major starburst has occurred; the most massive stars are already gone. The youngest stars are between 50 million and 300 to 400 million years old. By comparison, most of the other stars in NGC 4150 are around 10 billion years old.”

A merger with a small, gas-rich galaxy, around one billion years ago, supplied NGC 4150 with the fuel necessary to form new stars. The abundance of ‘metals’ — elements heavier than hydrogen and helium—in the young stars is very low, suggesting the galaxy that merged with NGC 4150 was also metal-poor. This points towards a small, dwarf galaxy, around one-twentieth the size and mass of NGC 4150.

Minor mergers such as this one are more ubiquitous than interactions between hefty galaxies. For every major encounter, there are probably up to 10 times more frequent clashes between a large and a small galaxy. Major collisions are easier to see because they create incredible fireworks: distorted galaxies, long streamers of gas, and dozens of young star clusters. Smaller interactions are harder to detect because they leave relatively little trace.

NGC 4150 is just an example in our galactic back yard of a common occurrence in the early Universe. The encounter that triggered the star birth would have been similar to our Milky Way swallowing the nearby Large Magellanic Cloud.

This image is taken with the Wide Field Planetary Camera 3 onboard the Hubble Space Telescope using infrared and color filters.