News by Subject » Anne's Image of the Day » Anne’s Picture of the Day: Emission Nebula RCW 120

RCW 120, a galactic bubble in Scorpius 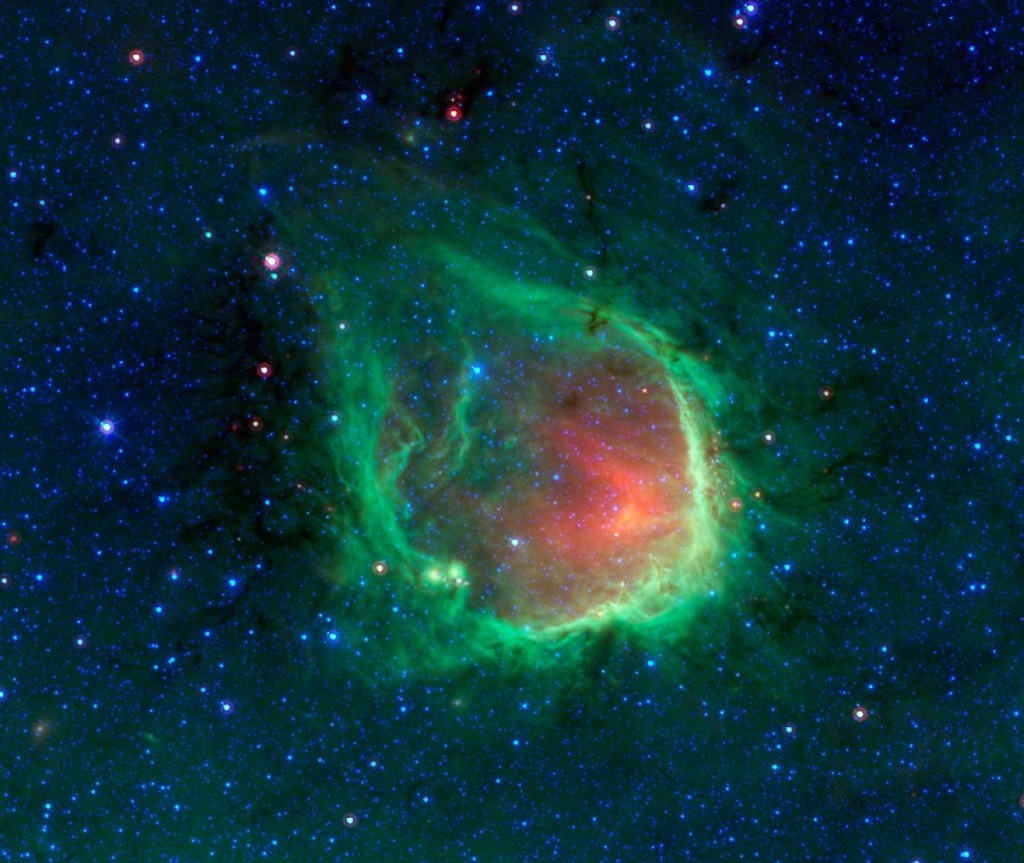 RCW 120 (also known as Sh 2-3 or Gum 58) is an emission nebula, a star-forming (H II) region of about 10 light-years across that lies some 4,500 light-years away from Earth, slightly above the flat plane of our galaxy in the southern part of the Milky Way, in the constellation of Scorpius.

This galactic bubble has been formed by a giant O-type star (the most massive type of star known to exist) at its center, which pushes on the surrounding dust and gas with nothing more than the power of its starlight. In the 2.5 million years the star has existed it has raised the density of matter in new locations, triggering a fresh round of starbirth.

This expanding star-forming cloud of ionised gas, is far from unique, Spitzer has found that such bubbles are common and an can be found around O stars throughout our Milky Way galaxy.

The green ring of dust in this image is actually glowing in infrared colors that our eyes cannot see, but show up brightly when viewed by Spitzer’s infrared detectors. The ring is where dust is being hit by winds and intense ultraviolet light from the massive stars at the center. The green color represents infrared light coming from tiny dust grains which have been destroyed inside the bubble. The red color inside the ring shows slightly larger, hotter dust grains, heated by the massive stars.

RCW 120 has revealed a large embryonic star, not yet sparked by fusion, triggered into formation by the power of the central star. This baby star is set to turn into one of the biggest and brightest stars in our Milky Way within the next few hundred thousand years. It already contains eight to ten times the mass of the Sun and is still surrounded by an additional 2000 solar masses of gas and dust from which it can feed further.

The star can only get bigger because it is surrounded by a cloud containing an additional 2,000 solar masses. Not all of that will fall onto the star, even the largest stars in the galaxy do not exceed 150 solar masses.

Massive stars have a profound influence on its environment. They control the dynamical and chemical evolution of the galaxy because they create the heavy elements like iron and are able to put them in the interstellar medium. And because they end their lives in supernova explosions, they also inject a lot of energy into the galaxy.