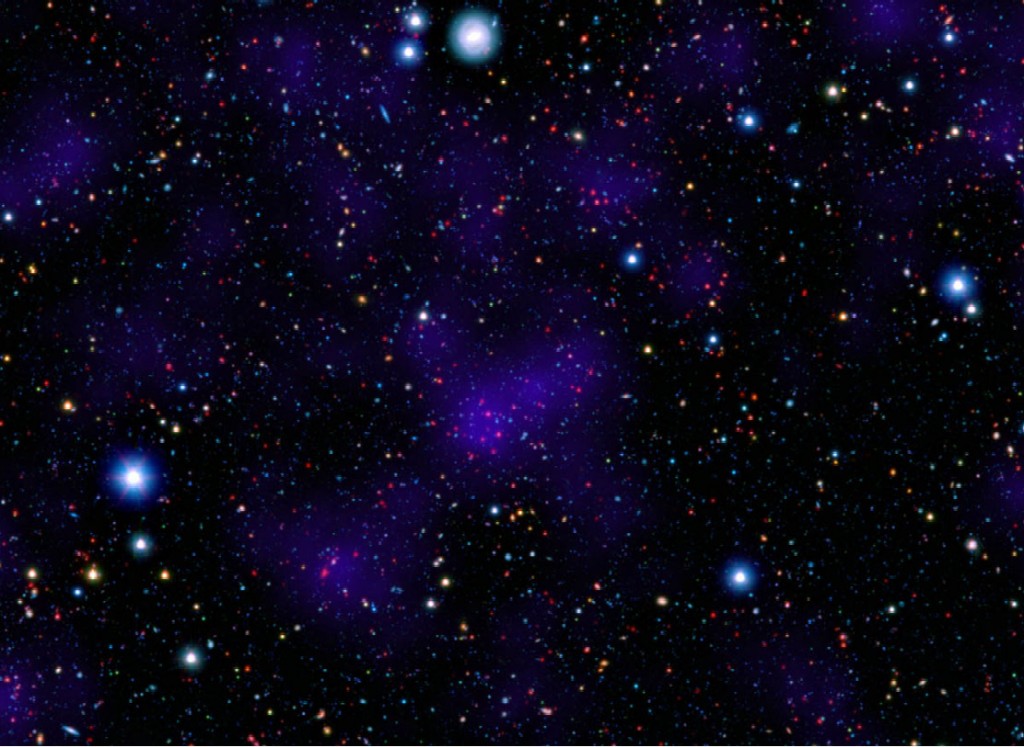 CLG J02182-05102 (also known as SXDF-XCLJ0218-0510) is a galaxy cluster that contains some 60 galaxies, located about 9.6 billion light-years away in the constellation of Cetus. For comparison, the much younger Local Group of which the Milky is a member, contains just over 40 galaxies. The cluster is shockingly “modern” in its appearance and size.

Because the light of the cluster took 9.6 billion years to reach Earth, we see CLG J02182-05102 as it looked like 9.6 billion years ago, some 4 billion years after the Big Bang — about 30 percent of the Universe’s current age of 13.7 billion years. At this point in time, most other galaxies would still be forming their very first stars and certainly would not have congregated with other galaxies yet, so CLG J02182-05102 may very well be the earliest, most distant cluster of galaxies ever detected. The cluster will continue growing, accreting more galaxies and slowly aging. By the present day it has probably grown to be a large metropolis of a cluster like the Coma cluster.

CLG J02182-05102 is surprisingly dominated by massive, full-grown galaxies (seen as red dots in center), typical for modern clusters. Enormous, red galaxies at the center contain almost 10 times as many stars as our Milky Way, combining for a total size which rivals that of the most monstrous galaxies of our nearby Universe.

Galaxies should be very rare when the Universe was 4 billion years old, so it baffles astronomers that they had already formed completely and evolved into the large concentrations of galaxies that we see in clusters today. Exactly why these galaxies are fully formed that early is still unknown, but for now, studying CLG J02182-05102 could help astronomers better understand how galaxies form and cluster in general.

Strangely enough, it is found that a significant fraction of these ancient galaxies are still actively forming stars. CLG J02182-05102 produces hundreds to thousands of new stars every year — a far higher birth-rate than what is present in nearby galaxies.

What is particularly striking, is the fact that the stellar birth-rate is higher in the cluster’s dense center than at the cluster’s edges — the exact opposite of what happens in our local portion of the Universe, where the cores of galaxy clusters are known to be full of massive elliptical galaxies composed of old stars.

From observations of nearby galaxy clusters we know that they are made of stars that are at least 8 to 10 billion years old, which means that CLG J02182-05102 is nearing the end of its hyperactive star-building period.

This composite image, combining infrared and visible-light observations, is taken with the Spitzer Space Telescope.